How Real Are September Breakouts?

Does a player's September numbers have any effect on his production the following year?

Share All sharing options for: How Real Are September Breakouts?

You know the story: player does well in September, continues in the spring, and jumps out to a fast start at the beginning of the year. People look at all three as a trend and determine that it will continue. Will it? Here I look at a few statistics of choice and compare a player's September and October regular season performance with the rest of that year and compare that with his performance the next year.

I compared strikeout minus walk rate, home run per fly ball rate, and wOBA for seasons from 1999 through 2012. I subtracted September and October performance from yearly performance and compared that to the player's increase from year 0 to year 1. Only players who had enough plate appearances to be qualified in September and at least 200 PAs in both seasons count in this analysis. 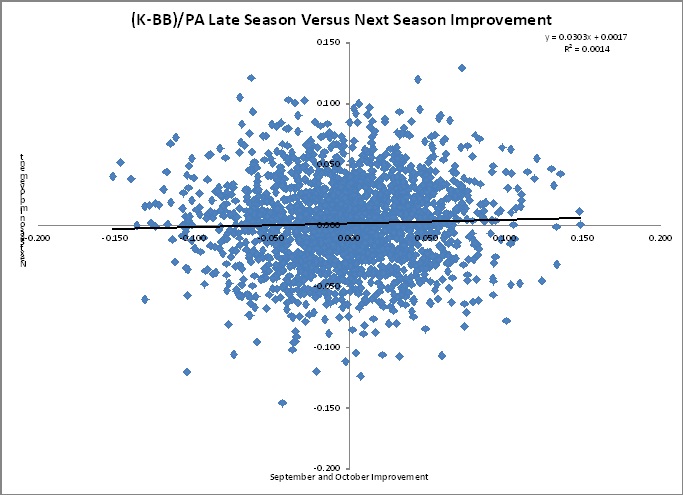 The player who best improved this rate in September was Edgar Renteria, circa 2000. The next year his rate was worse. Of the top ten best improvements, only two actually improved their rate the next year. The difference between Matt Lawton's 2004 and 2005 are negligible, so that really only leaves Brian Giles from 2001 to 2002. Giles was always a walk machine, but his 2002 season was by far the best of his career with a 21% walk rate. He returned to his typical levels in 2003.

Of the top ten players who improved their rate the following year, only four did so the preceding September: 2003 Barry Bonds, 2001 Barry Bonds, 2004 Jason Bay, and 2009 Delmon Young. 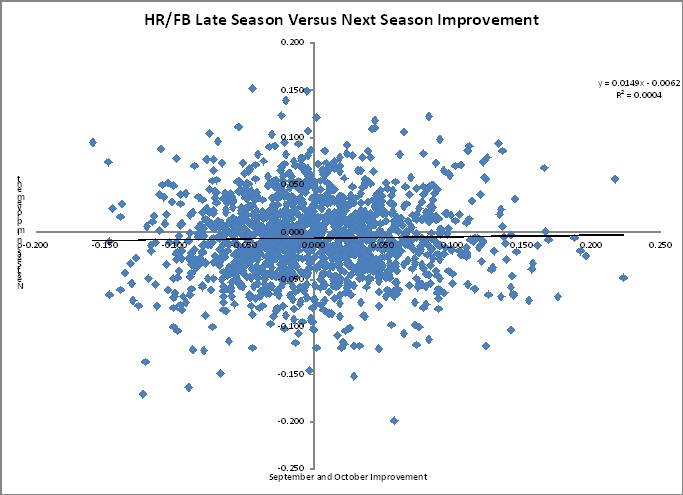 Only players after 2002 count here, since this rate was not calculated until that point. 2003 Jim Thome had the best late year improvement. He still had a 30.3% HR/FB for the year, but hit an amazing 52.6% in September. Again, in the top ten, only two players improved their rate the following year: 2005 Lance Berkman and 2002 Jeromy Burnitz. Jose Bautista's 2009 season ranks 30th in September improvement and 19th in next year improvement.

Which of the top ten players who improved their next year home run per flyball rate did so in September the previous year? 2011 Ian Desmond and 2008 Troy Tulowitzki. 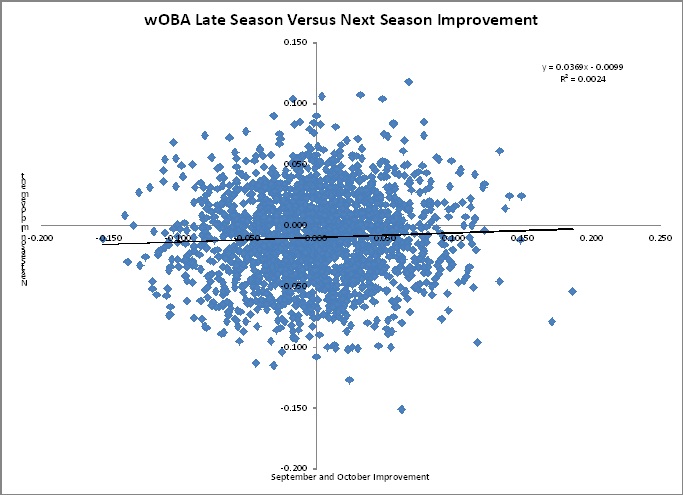 For those players who best improved their wOBA the following year, a whole five of them did so the previous September: 2003 Adrian Beltre, 1999 Darin Erstad, 2003 Jermaine Dye, 2011 Aaron Hill, and 2009 Jose Bautista.

Quick and dirty analysis, but good enough. There are variables missing: age, previous career levels, different statistics, but the axiom remains the same. Small sample sizes don't mean as much as large sample sizes. There are no trends here at all, even when just looking at the top players to improve their performance. Next time someone tries to tell you about how a player improved in September, tell them, "Yeah, so did Randy Winn in 2005 and look how that worked out for him."