When you have Mike Trout on first base and a singles hitter at the plate, steal first, then you can bunt.

Share All sharing options for: Stealing, Bunting, and Mike Trout

This will be an article about a (probably) bad bunt. Have you read an article like that before? Yes? Well, too bad, because you're going to read another one. This time it will be the story of the Angels, the story of a bunt, the story of a bunt that came to be while Mike Trout, a god among men, was on first base. Yes, the same Mike Trout that successfully stole 49 of 54 bases last year. But we're getting ahead of ourselves.

Here's how the inning started: 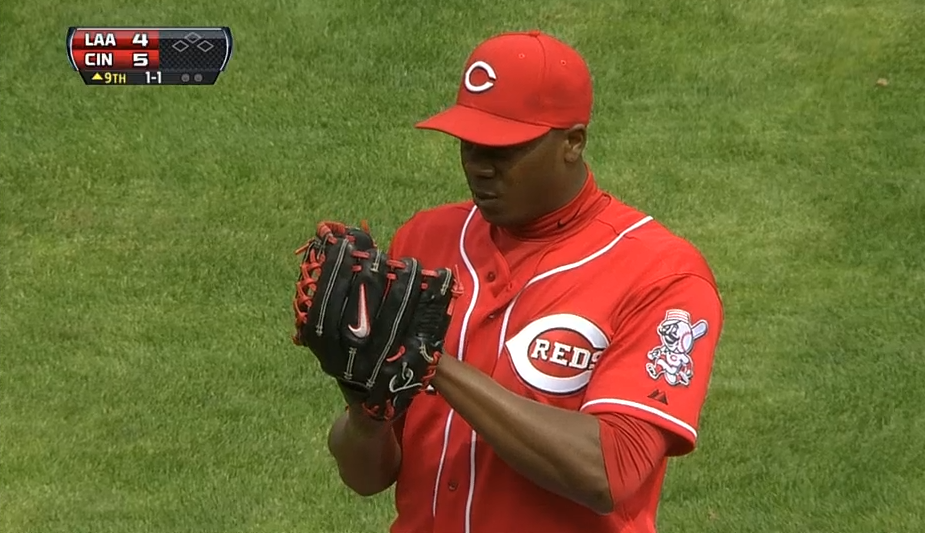 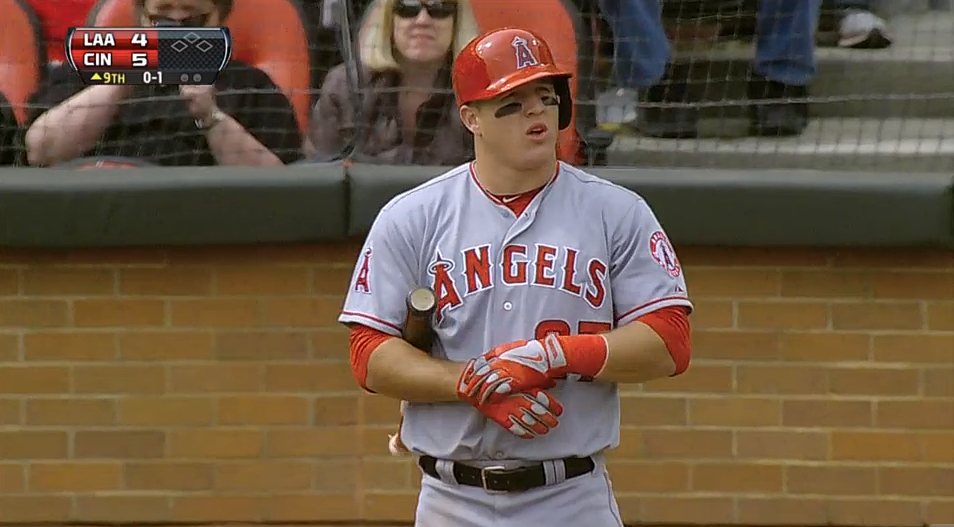 Oh, and because we're a saber-inclined website where we use numbers and nonsense like that, I suppose I should give you some numbers regarding this situation.

The first part of the story isn't too important. Mr. Trout, doing what he does best, beat the Cuban Missile, lining a single to the right side. He ends up on first, and looks handsome doing it. 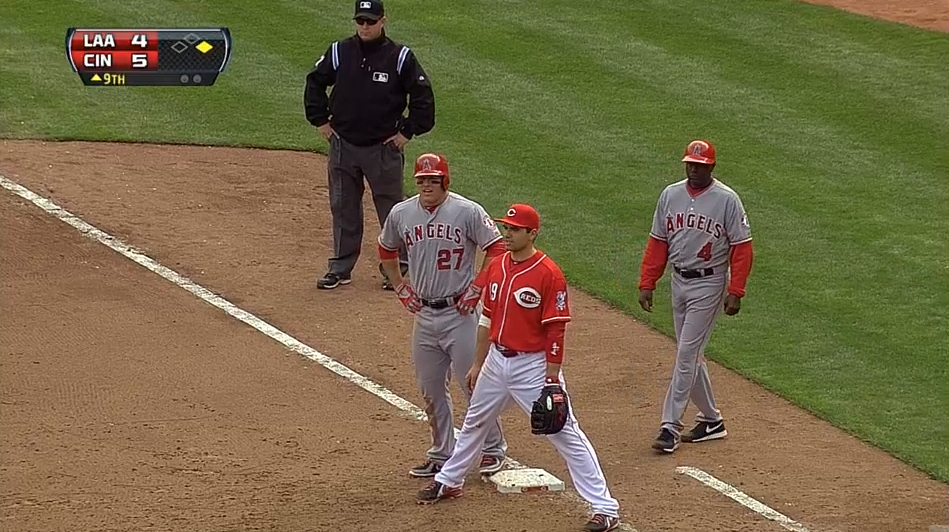 Here's where things get interesting, and by interesting I mean frustrating as hell. But first, more numbers:

In fact, let's look at the hypothetical numbers if Mike Trout had in fact stolen second base. Remember, these are hypothetical, not what actually happened (because that's what hypothetical means):

Look at those numbers, then look at the numbers right above them. That's a pretty significant shift, isn't it? Just by stealing a base, Trout increases his team's probability of winning by 8%, and the chances of scoring at least one run (this at least tying the game) by 20%!

So, assuming Trout has an 80% chance of stealing successfully, a stolen base attempt has an expected win probability added of 2.74%. However, there's one very important thing to note: the batter at the plate. Batting after Trout was Erick Aybar. Aybar is not a power hitter. He is a singles hitter, but he does not get on base at a great rate for the number of singles that he hits (read: he doesn't walk a lot); last year his line was .290/.324/.416. When singles hitters who don't get on base at a great rate are at the plate, it is a much better idea to steal than when good power hitters are at the plate.

In fact, I talked about this a while back, and even calculated the breakeven stolen base rate while each individual hitter is at the plate, sorted by number of outs. Aybar, with no outs, had a breakeven rate of 68.5%, which, though not at the bottom of the list, was definitely in lower end of qualified hitters.

Long story short, this means that it was an even smarter idea to steal second when Aybar, who doesn't get on base much and when he does hits singles, was at the plate than the average batter.

Instead, Mike Scioscia decided to do this: 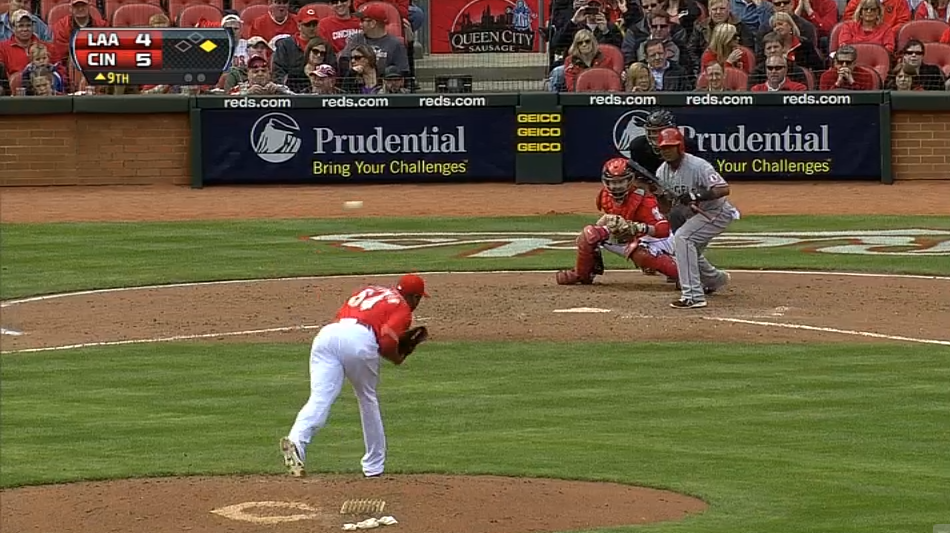 The bunt was successful, and probably seemed like a fine idea at the time because Albert Pujols was coming up next. However, consider the win probability numbers after the bunt:

Compare that to the numbers above for while Trout was at first, and you see that all three dropped, even the chances of scoring just one run. Now these numbers aren't perfect because of the fact that Pujols was coming up after Aybar. However, even if the bunt didn't hurt the Angels, it was certainly a worse idea than having Trout steal second. And, once that happened, it may have actually been a good idea for Aybar to bunt Trout to third, because that would bump their chances of scoring at least one run to 66.2%, higher than if he was on second with no outs.

But, alas, as often happens when teams decide to give up outs, the Angels' plan did not work. Pujols lined out to right, and Hamilton did this, ending the inning and the game" 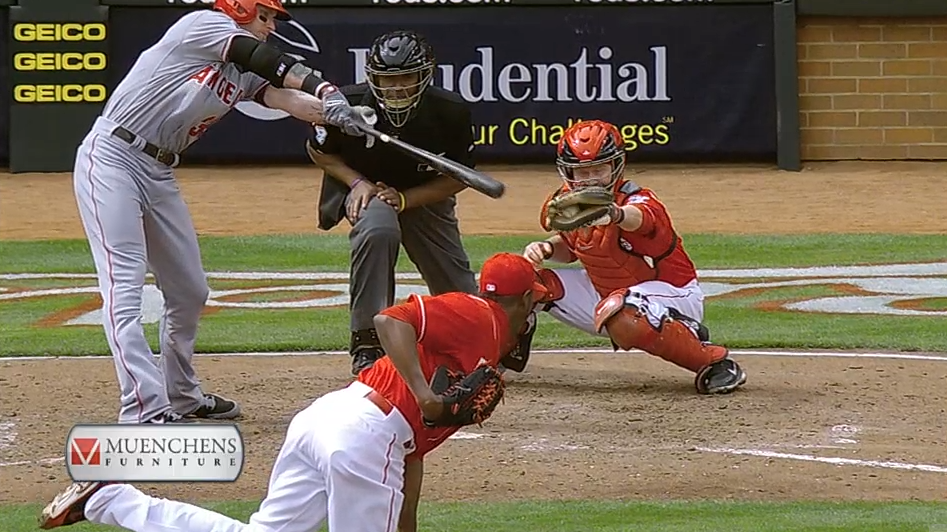 Here are the final numbers for the end of the game, because I'm just a mean person:

Let that be a lesson to the managers and armchair managers of the world. If you have one of the best base stealers in the game on first base, and the batter that is up tends to hit singles and not much else, steal second before you think about bunting. Sure, the risk is higher, but the reward - winning the game - is well worth it.