Building on the strike zone pitch location quality metric introduced last week, we look at how 2013 closers fare in locating their pitches in combination with pitch velocity.

Share All sharing options for: 2013 Closers: Pitch Location vs Velocity

Last week, I introduced a metric that in its current form attempts to quantify how well pitchers locate their pitches within the strike zone. At this point, the measure is completely context neutral, in that it does not consider league, ball park, defense, base state, out state, count or even the eventual result of the pitch in terms of what the batter was able to do with it. It uses league average wOBA against per pitch type per strike zone sub-zone to determine the typical success of each type of pitch in each section of the strike zone.

While I plan to add other components on top of just location to build it into a potential performance analysis tool, as it is it offers some useful information about a pitcher that I do not think we currently have in one number.

The next pitch characteristic that I will endeavor to work into the equation will be velocity. There was a relatively small, yet statistically significant positive correlation (0.22) between the strike zone pitch location number (essentially estimated wOBA against) and velocity.

After looking only at qualified starters last week, before I move on to consider velocity I thought it would be interesting to examine another subgroup of pitchers where velocity tends to be high - closers. Closers tend to be relievers that have experienced some amount of success and in general throw the ball very, very hard. If nothing else, I wanted to see which 2013 closers were the best at locating their pitches within the strike zone in 2012. I also wondered what sort of correlation I would see with velocity in this small group of specialized pitchers.

Here is the table of 2013 closers, with their estimated strike zone wOBA against based on location alone, along with their average fastball velocity as reported by PITCHf/x. The list of closers is taken from this closers depth chart. I replaced "interim" closers Mitchell Boggs (.3177, 95.7) and Bobby Parnell (.3133, 95.8) with expected-closers-when-healthy Jason Motte for the Cardinals and Frank Francisco for the Mets. For a few pitchers who did not throw pitches classified under FF/FA by PITCHf/x, I used the velocity of their fastest pitch type (sinker).

To see graphically how the strike zone pitch location quality metric correlates with velocity, we can run a simple linear regression. While the sample size here is small, the relationship is actually pretty stunning for closers. 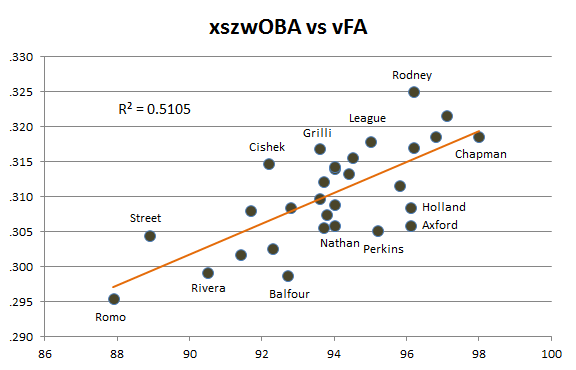 We see a much stronger positive correlation here between strike zone location quality and fastball velocity than we did with the set of qualified starters, all the way up to 0.71. With such a small group, just changing out a handful of names with others could like change the correlation quite a bit, but there does certainly appear to be a trend here. I should say that correlation does not necessarily imply causation. So we cannot look at this and say that throwing harder causes a pitcher to have less control over the location of his pitches within the strike zone, for example.

While not all closers are equal, we know that for a pitcher to be tagged the closer on a particular team, the organization must feel that he can perform at a high level relative to the other options that they have. Given that these pitchers tend to all be quite successful, the relationship above should not be surprising, but it does serve as evidence of something we inherently believe to be true - that pitchers who throw gas do not need to be as refined in their pitch location as those who can't just blow it by hitters time after time. Closers who can pitch at an elite level without elite velocity tend to have much better strike zone command than the fireballers.

This helps to give us a quantitative explanation of how guys like Mariano Rivera, Sergio Romo, Huston Street and Rafael Betancourt can cut it as closers without standout velocity. These pitchers know how to locate strikes in areas where hitters do not as much damage as others.

I should point out that both Fernando Rodney and by a slim margin Craig Kimbrel appear on the wrong side of the line here for 2012, so this combination is certainly not proof of actual performance. As a reminder, the location quality metric is also not adjusted for home ball park or team defense, two aspects that certainly would help Rodney's performance as a closer. In fact, as a group those pitchers below the line averaged a more damaging basic home park factor of 101.7, while those above the line averaged a more favorable 98.8 home park factor.

The measure of location quality is also specifically focusing within the strike zone, meaning pitchers that operate most effectively outside the zone (i.e. high O-Swing%) may not be entirely appreciated using this approach. Location and velocity also make up just two thirds of individual pitch characteristics available through PITCHf/x, with movement also being ignored in this analysis.

On the whole, I believe even at this point that this is an interesting way to look at the closers around the league today. If I had to choose closers without knowing anything else about them I would take guys who possess a good combination of strike zone pitch location quality and high velocity, although would lean toward more velocity if I had to choose. Long term successful closers Mariano Rivera, Joe Nathan and Jonathan Papelbon all ranked as better than average using this methodology, to cherry-pick some familiar names.

Next week I will build velocity into the strike zone pitch quality metric and see where that takes me.

What do you think about this way of assessing the relative merits of closers?

Credit and thanks to Baseball Heat Maps for PITCHf/x data upon which this analysis was based and to Fangraphs for other pitching statistics and park factors.