Cardinals Succeed When it Matters Most

The St. Louis Cardinals are the early leaders in an NL Central that sports 4 winning teams. What has propelled them to the top of the division? The answer may surprise you.

Share All sharing options for: Cardinals Succeed When it Matters Most

I don't know about most baseball fans, but to me, nothing proves more fun then perusing the standings in April, pondering the oddities that have arisen after only a few weeks of the season. This is a time when one or two players can carry their team to first place in the division, and those same players slow starts could push their club into the cellar.

April is the first month of baseball, meaning that there's a lot more baseball to play, enough to give the teams with dismal records a chance at the playoffs and teams with inflated win-loss totals back to earth. Still, when glossing over the current MLB standings we see some surprises sure, but many teams are already living up to their pre-season expectations.

For example, while the predicted juggernaut Toronto Blue Jays come in last in the AL East, the Braves and Nationals find themselves, as projected, in the top two spots in the NL East. We could have fun discussing the surprising teams in both leagues, but some of the subtler and more interesting trends lie elsewhere.

In the National League Central, the St. Louis Cardinals currently hold the top spot with a 14-8 record heading into Saturday's game with the Pittsburgh Pirates. In 2012 the Cardinals finished second in the division to the Reds, winning 88 games and losing 74. Still, when it comes to the postseason, no recent team has been better than St. Louis, and the Cardinals struck again by beating the upstart and favored Nationals in the division series before the Giants shoed the Redbirds away in the NLCS.

The Cardinals have played in three World Series in the last decade, winning two of those three. Since 2008 the Cardinals franchise has averaged a .545 winning percentage, an impressive feat given that star first baseman Albert Pujols hasn't played for the team since leaving via free agency for LA during the 2011-2012 offseason. Add in the various and numerous injuries the team has suffered to ace pitchers Chris Carpenter and Adam Wainwright, and there's no way any observer would expect St. Louis to continue to win so many games.

That leads us to 2013. After watching the Cardinals play, both in person and on television, I wondered, what exactly was the driving force behind their success. I noticed above average starting pitching, and a lineup that had high profile hitting names, but also a mess of a bullpen. In a piece for Yahoo! Sports, Dave Radcliffe comments on the reasons behind the Cardinals' winning ways:

...The Cardinals have dealt with injuries in the early going, but their starting pitching has been off the charts -- the best in baseball through 20 games by a wide margin with a sparkling 2.38 ERA.

Dave's first conclusion, that the Cardinals have ridden some stellar starting pitching to the top of the NL Central tells some of the story. Cardinals' starters have combined for the 6th best K% in the Majors at 22.5%, the highest ground ball percentage in baseball at 55.1%, and most importantly have given up the fewest home runs in the league sporting a miniscule .032 HR/9 rate. All of this despite a pedestrian 8.1% walk rate that places the Redbirds starting staff 19th in MLB. Most importantly for the Cardinals starters, these great statistics do not prove top heavy. No one pitcher constitutes a significant outlier, with Wainwright, Shelby Miller, Jaime Garcia, and Lance Lynn all contributing in a positive manner. Jake Westbrook brings up the rear, but his stats portray more of a league average pitcher.

So, the starting pitching has been awesome, but for a team to win games more often than lose them, some offense must exist. To quote Radcliffe again:

Of course, there is also the potent Cardinals offense, anchored by Matt Holliday, Carlos Beltran, David Freeze and Allen Craig among others. These big bats have St. Louis ranked in the top five in runs.

Radcliffe may not have made an impressive leap, but it definitely seems like the right one. Just look at those names, the Cardinals, at least by names alone, look to have a stellar, almost unbeatable offense. In addition to the players listed above, the Cardinals also have Yadier Molina, Jon Jay, and rookie Matt Adams.

Well, if you believe the facts thus far, you're in for a surprise. The Cardinals offense ranks 19th in the Majors in wOBA and OPS, 22nd in BB%, 20th in Iso, and only 19th in true average. At those point in the season it can be important to look for outliers, as one everyday player who has contributed little by this point in the season can easily skew a team's statistics.

Of the Cardinals regular players, only 4 have a wOBA above .300. While this may not seem awful, but regulars like Jon Jay, Daniel Descalso, Allen Craig, Pete Kozma, and David Freese all have a wRC+ below 90. In fact, starting pitcher Adam Wainwright who has 14 plate appearances has a higher wOBA than Daniel Descalso who has 50 plate appearances.

Offensively the Cardinals have not been potent, it's been a bit top heavy. Most importantly, given their offensive statistics, this doesn't seem like a first place team. Well, now we've arrived at the crux of the matter. The Cardinals have been excellent, nay stupendous at hitting with runners in scoring position. The always coveted RISP situation, the chance to knock in a run, rack up the RBIs, but most importantly an increased chance to score runs.

I decided to look a little deeper into this line of thought. Knowing that the more runs a team scores the more wins they will accumulate, I decided to see if the same could be true for wOBA with runners in scoring position. Interestingly, after regressing teams' wOBAs with RISP and winning percentages since 2008, I came up with an r^2 of only .22, showing minimal significance. 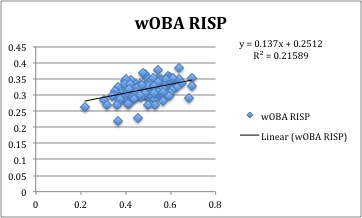 Many teams with high wOBAs with runners in scoring position faired well from year to year, but similarly, teams with average or below average wOBAs also had high winning percentages. Some of this is easily explained in that hitting is only one facet of the game that leads to victories. In addition, there is the difference in the opportunities a team has to hit with runners in scoring position versus all other possible hitting situations. There is much more to delve into when looking specifically at how teams fair offensively with runners in scoring position, and in time I plan on exploring these aspects. For now though, it is fairly safe to say that St. Louis has been mashing the ball when it counts the most, and that clutch hitting, combined with very good starting pitching has placed them, once again, atop the NL Central.

All data used in this piece came courtesy of Fangraphs.com

1) Where should I go next, what specific aspects of hitting with RISP jumps out at you?