Sampling pitching coach philosophies around the American League East and examining how well teams are executing to date in 2013.

While the details of the philosophies will differ, we tend to hear many of the same high-level catchphrases quoted in interviews with pitching coaches. "Getting ahead", "attacking the zone" and "commanding the fastball" are just some of these common refrains. Today I will seek to examine some specific aspects of pitching philosophies espoused by pitching coaches in the American League East, and assess whether their pitchers are following through on these marching orders.

"After the first three pitches, I want everybody to be 1-2. That’s my favorite count," pitching coach Juan Nieves said.

"It's almost a 200-point swing in on-base percentage with one ball and two strikes as opposed to two balls and one strike," Hickey told the pitchers. "Get ahead, and everybody becomes David Price," the team's 2012 Cy Young Award winner.

Interestingly, all three of the aforementioned pitching coaches believe strongly in making the 1-1 pitch count. This idea has also been trumpeted by Dr. Mike Marshall, with the idea that while the first pitch is very important, it is also a pitch where a lot of damage is done by hitters, so trying to get ahead with an uninspired first pitch fastball should not be automatic.

One way to interpret the philosophy shared by these coaches is that they want to maximize the number of 1-2 counts and minimize the number of 2-1 counts. With this in mind, we can look at how these three teams have executed in getting to these counts.

Data: Baseball Reference (2013 up to and including April 24)

The Red Sox pitching staff is off to a flying start this year, currently on pace to break some all-time team strikeout records. Here we can see that while their first pitch strike percentage (which includes first pitches where contact is made) is middle-of-the-pack in the league so far, they are near the top of the leaderboard in getting to Nieves's "favorite" 1-2 count as opposed to the alternative 2-1 count. This offers some support that his 1-2 count mantra is getting executed by the pitching staff in his first year in the role of pitching coach. 2013 Grade: A. Pre-2013 Grade: N/A (other pitching coach).

The Rays staff has been quite efficient at getting ahead on the first pitch so far in 2013, yet find themselves below average at getting to 1-2 counts as opposed to 2-1 counts. This is a contrast to recent seasons in Tampa Bay, where the Rays have been stellar at achieving 1-2 counts versus 2-1 counts. In 2012, the Rays were third in the league, behind the Reds and the Tigers. From 2009-2012, all years within the Hickey reign, the Rays were also a clear third overall across MLB, just ticks below the Phillies and the Dodgers. Across his body of work, it would appear that the Rays are heeding Dickey's advice, although to date in 2013 the Rays staff has struggled at executing on 1-1 pitches. 2013 Grade: C. Pre-2013 Grade: A.

And then, there's the Orioles. Mired in the bottom here. To be fair, Rick Peterson is not their major league pitching coach (it is Rick Adair), so his philosophy may not be directly applicable in this study. The Orioles have been atrocious at generating 1-2 counts so far this year, although like the Rays accomplished this feat much more last season in Peterson's first season in his role, when they placed 11th in the league in the 1-2 versus 2-1 differential. 2013 Grade: F. Pre-2013 Grade: B.

For what it is worth, with both called strikes and strikeouts on the rise, we see a different history of 0-1 versus 1-0 counts compared to 1-2 versus 2-1 counts: 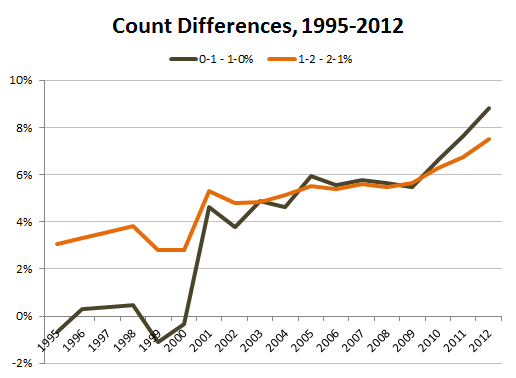 Here we can see clearly one of the impacts of the 2001 decision by Major League Baseball to direct its umpires to call the strike zone based on its official definition as opposed to the conventional zone that was being called at that time. In 2001 there is a noticeable increase in 0-1 counts compared to 1-0 counts, whereas prior to that point they tended to be roughly equal in number.

We can also see a sharp rise in both of these count differentials over the 2010-2012 stretch of seasons, when strikeout rates have been shooting through the roof. In this time, we have seen the relative frequency of getting up 0-1 versus 1-0 surpass that of getting ahead 1-2 versus 2-1, where in the late 1990's before the strike zone interpretation change we clearly saw the opposite.

In running yearly linear regressions of these two count differentials and ERA since 1995, we see on average a negative correlation of about -0.5 for each of them. This serves as some evidence that getting into these pitcher-friendly counts early in plate appearances do pay dividends.

There is much more work that could be done here, although Craig Burley already covered the relative importance of counts in 2004 in a multi-part series at the Hardball Times That said, given the developments of the past couple of seasons with respect to the strikeout environment, this sort of study would be worth repeating in my opinion. I suspect one might arrive at the same conclusion, which is that while 1-1 pitches are in a vacuum "more important", the fact that there are far fewer of these than 0-0 pitches makes them have less impact on total runs allowed than the first pitches of plate appearances.

"I want to avoid three-ball counts, forcing contact early in the count,'' Walker said. "We want to limit our walks. Aside from keeping the ball down, it's attack early and expand late.''

To examine how well the Jays have been meeting Walker's goals, we can examine the number of 3-0 counts that the Jays have faced relative to the league, as well as their BB%. Likely any Jays fans will have a pretty good idea what this assessment might look like at this point of 2013:

Data: Baseball Reference (2013 up to and including April 24)

The Jays have certainly not been elite at either avoiding 3-0 counts or limiting walks, placing slightly below the league midpoint in each measure in the early part of 2013. They hit 3-0 counts at an almost identical 20.53% rate last season, with a BB% of 9.2%. That said, the starters are starting to look better after the first couple of times through the rotation. Over the past several seasons, the Jays did not appear to place much importance on getting to 0-1 or 1-2, as evidenced by their 28th place ranking in the league at both 0-1 versus 1-0 counts as well as 1-2 versus 2-1 counts between 2009-2012. Despite the continuation of a dreadful F-Strike% as seen in the earlier table, the Jays staff has reached 1-2 counts at a decent clip compared to 2-1 counts this season. 2013 Grade: C. Pre-2013 Grade: N/A (other pitching coach).

"I tend to look at guys individually," he said. "The one thing they have to be able to do is repeat their deliveries. It's something I harp on a lot. If you can repeat your delivery you should be able to control the ball to a certain extent. But philosophy-wise, I tried to take everybody on an individual basis, because every individual is different."

What am I supposed to do with that, Mr. Rothschild? Unfortunately, I have not come across any good quotes from Rothschild describing a specific philosophy. I suppose I could look at PITCHf/x release point variability among Yankees pitchers compared to the rest of the league, but comparing at this level of detail would certainly require release point data correction first and thus would be a study for another day. Sorry Yankees fans.

While the 2013 season is still young, I find it interesting to look at what people involved directly with the game are saying, and then see if we can find traces of these strategies in the underlying data - hopefully you enjoy this as well!

Credit and thanks to Baseball Reference for data upon which this analysis was based.