A PITCHf/x look at Jose Fernandez.

When it was announced that Jose Fernandez would start the season in the majors, many people within the baseball community questioned the move because Fernandez had yet to pitch above A+ ball. He's only 20 years old, and it was just a head scratching move overall. While Fernandez has definitely shown his age in his four starts, overall he's been extremely impressive. 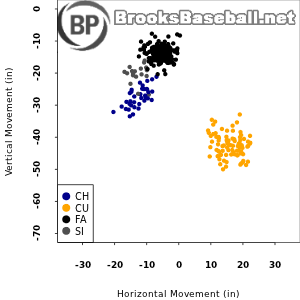 So far Fernandez's fastball has looked awesome. As I stated earlier it averages 95 MPH, but according to Brooks Baseball it has touched 97-98 MPH. It doesn't have much movement at all; it doesn't matter though, because when you can reach those speeds you don't need much movement anyway. If you're a visual person (like myself), I was able to get a GIF* of a Fernandez heater.

He's been able to get ground balls at an extremely high rate when throwing it, inducing ground balls over 56% of the time. According to Baseball Prospectus, that is the fourth highest rate among all starting pitchers who have thrown at least 100 fourseam fastballs.

With a high ground ball rate obviously comes low line drive and fly ball rates, and Fernandez has been able to keep both of those under the 20% mark. In fact, he is yet to give up a home run yet when using his fastball. He doesn't generate many whiffs per swings, but that still hasn't prevented him from being successful.

His curveball, which could arguably be his best pitch, has extremely good movement. While it isn't like a Stephen Strasburg sweeping curve, it is still a belt buckler:

Like his fastball, his curve doesn't generate a ton of whiffs either. What it does do though is get a ton of ground balls. 55%, to be exact. Fly balls are a bit of a problem, but on the other hand he's only giving up line drives 11% of the time. His curve has the lowest TAv against, only .211.

He doesn' t throw his changeup a lot, but so far it has gotten solid results. He's either gotten ground balls or fly balls, both occurring 50% of the time on balls in play. His changeup has made the most whiffs per swing occur, just over 28%, and has also given up Hernandez's only home run of the season.

He does throw a sinker, but not as frequently. It's gotten whiffs on swings exactly half of the time, but every time a ball has been put in play it has been a line drive.

Fernandez has had some struggles though, and we can them if we take a look at his PITCHf/x plate discipline statistics. So far he's only managed to throw first pitch strikes 56% of the time. League average tends to hover around 59-60%, but the fact that Fernandez is only 20 and hasn't pitched above A ball should tell you something. Batters are also rarely swinging at pitches outside of the strike zone, and they don't generate a ton of contact either.

All in all, this has been a very impressive start to the season for Fernandez. His three main pitches have been quite good, but he does have some things to work on. It'll be interesting to see how he adjusts to hitters as the season goes on, since they will undoubtedly adjust to him.

All statistics are taken from Brooks Baseball and FanGraphs.

Huge thanks to Matt Hunter for supplying the GIFs used in this piece.