Is There A Team More Collapse-Proof Than The Detroit Tigers?

The MLB season is long and can feature some unexpected injuries or poor performance. The teams that usually survive and move onto the postseason have some elements that could be described as collapse-proof necessities. In 2013, the Detroit Tigers are the least likely to collapse.

Share All sharing options for: Is There A Team More Collapse-Proof Than The Detroit Tigers?

About 10% of the 2013 MLB season is in the books. It's hard really to tell which hot starts are unsustainable and which performances are legitimate. Right now, the Rockies have the best record in baseball whereas the Angels, Blue Jays and Dodgers are stumbling out of the gate. Would you wager that the Rockies are going to end the season with more wins than these teams? Unlikely. If you're a big fan of Beyond the Box Score or Sabermetrics in general, you're likely aware of the risks of predicting future success off of small sample sizes.

Then again, some teams look great on paper at the onset of the season just to underperform throughout the year, ending with a disappointing record and unfulfilled expectations. For any contender to sustain success throughout the long, enduring 162 game season, they have to have some collapse-proof elements. David Schoenfield has developed a collapse-proof criterion over at ESPN Sweetspot:

Diving into the strength and weaknesses of a couple collapse-proof contenders, Schoenfield explains that the Tigers scored well in the quality and depth of their rotation, durability, star players and division. As of right now, Detroit is boasting one of the best rotations in the league (albeit in a small sample size) with Justin Verlander, Anibal Sanchez, Max Scherzer and Doug Fister boasting ERAs under 2.85 and FIPs under 3.6. Right now, the black sheep in the rotation is Rick Porcello but with Drew Smyly waiting in the wings, their rotation should not be much of a concern unless there's an injury to one of the top four. It wouldn't be surprising if Smyly is pushed to the rotation if Porcello continues to falter.

As Schoenfield mentions, Miguel Cabrera has played in at least 150 games since 2004 and Prince Fielder has only missed 12 games in his seven plus year career. Having a trio of bonafide stars with Cabrera, Fielder and Verlander, the argument could be made for Max Scherzer (4.5 fWAR in 2012), Anibal Sanchez (3.6 fWAR), Doug Fister (3.5 fWAR), Austin Jackson (5.2 fWAR) and Torii Hunter (5.1 fWAR) to be listed as well. It's just a matter these players repeating their previous success. Hunter seems to be the only one who is due in to regress from their excellent 2012 performance. Fueled by a .389 BABIP (80 points higher than his career average), it can be expected that Hunter will fall more into the 2-3 WAR player that he was prior to last year. Regardless, the Tigers do not have a shortage of star power and durability.

Age really isn't a concern for Detroit either. Miguel Cabrera and Justin Verlander have just entered their 30's. Johnny Peralta and Omar Infante are going to be primarily responsible for the middle infield at age 31, but both have been pretty durable and should be fine. Victor Martinez is 34 and recovering from knee surgery, seemingly having trouble adjusting to pitchers to start the season. Oldest of all is Torii Hunter at 37 but he's been pretty healthy over the paste decade. These two are the primary concerns in regards to age but when there are only three every day players who are 31 or older, it is not a serious red flag. 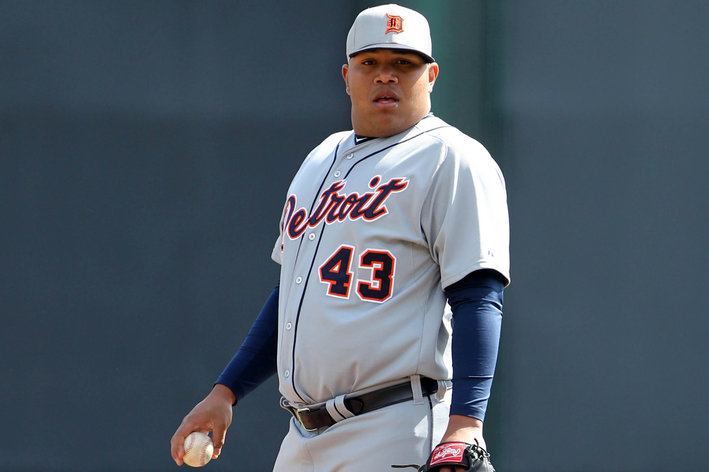 The Tigers do not have a proven closer right now and may have some holes in their late inning setup. Is that really a serious concern?

Onto the bullpen. As of right now, Joaquin Benoit is the closer but Jose Valverde could assumingly trek his way through the minors and find himself in the same role that he was in last year. Smyly will likely be promoted from the bullpen to the rotation as Porcello is either traded or converted to a reliever. This move would likely weaken the bullpen but improve the rotation. Phil Coke is best suited as a LOOGY, holding lefties to a .619 OPS compared to .805 for righties. Al Alburquerque was excellent in 2011 (2.08 FIP In 43.1 IP) and in a super small sample size in 2012 (2.19 FIP in 13.1 IP). Octavio Dotel is 39 and is already battling elbow inflammation during the early part of 2013. With Bruce Rondon and Valverde in the minors, there are viable replacements for Dotel if an extended disabled list stint is needed. With the lack of a proven closer at the moment and some mediocre arms in the pen, this is Detroit's biggest weakness. In reality, it's a testament to their other strengths and not really a serious concern.

The Tigers play in the AL Central, one of, if not, the weakest divisions in baseball. As of April 22nd, the Royals are leading the division. Lorenzo Cain, Eric Hosmer and Mike Moustakas fulfilling their potential all in the same year could really catapult them into contenders with James Shields and Alex Gordon continuing to be great but could that happen this season? The Indians may surprise some people in 2013 but they're probably still a year or two out of contention. The Twins are currently boasting a rotation where Vance Worley is considered their best starter. The White Sox were competing for the AL Central crown with an underperforming Detroit team last year but slipped out of contention in the summer. Could they conceivably compete again this year? Possibly. But they will probably need incredible performances from Jake Peavy and Chris Sale again. Chalk this up as another strength for the Tigers.

The Tigers have some viable starting pitching depth, durability, young, star players in a relatively weak division. The only attribute that couldn't really be considered a strength would be its bullpen, primarily because of their dominance in other elements in Schoenfield's criterion. Is there a team that is more collapse-proof than the Detroit Tigers? Are there elements that should be considered besides the ones listed above?