Is Miami's offense the worst ever?

Through the first few weeks of the season the answer is yes. Can the Marlins keep up the pace to cement their place in history?

Share All sharing options for: Is Miami's offense the worst ever?

After Saturday's 19-6 defeat, rumblings about the Astros chances to be historically bad started once again. Quietly, possibly due to the lack of anyone actually watching their games, the Miami Marlins have the worst record in baseball. As Cliff Corcoran notes, the pitching staff has actually has been competent through 18 games, allowing 4.38 runs a game to this point. The problem has been an anemic offense that is scoring runs at a historically poor pace.

How bad has the Marlins' offense been so far? Their hitters have posted a triple-slash line of .206/.266/.275 and have combined for a pedestrian 48 wRC+. Yes, they are performing at a rate that is less than half of league average. That mark would make them the worst offensive team since 1900, and it wouldn't be particularly close:

Looking at the list, you may notice that six of those seasons came before 1950 and all of them came before 1985. The number we are using, wRC+, is park and league adjusted, but the game has changed over the years. Below you can see the progression of runs per game since 1900: 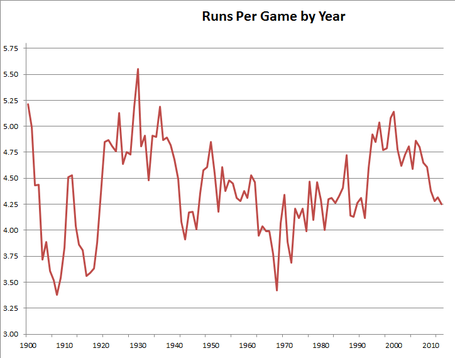 Since a low point in 1968, offense has been on a steady rise, peaking at 5.08 runs scored per game in 2000. While it has been slowly declining the last few seasons, we are still in a better run scoring environment than 50 years ago. Even if the Marlins don't claim the title for the worst offensive team in history, the worst offensive team in recent memory should be well within their grasp. The table below shows the worst hitting clubs since the year 2000. My advance apologies to Mariners' fans for dragging up recent woes.

The gap between Miami's current 48 wRC+ and the full season totals of recent teams is rather large. Obviously these teams saw their struggles continue throughout the entire season, whereas the Fish have another 144 games to change their fortunes, so the question becomes do they have the personnel to prevent historical lows. Based on their current depth chart, here we can see their ROS ZiPS projections, and their current wRC+:

The offensive struggles by the Marlins look to be somewhat sustainable. The rest of the season numbers only project two players, Justin Ruggiano and Gincarlo Stanton, to perform at league average or above. There will be other hitters who will be added to the mix, including Casey Kotchman, Logan Morrison, Adeiny Hechavarria, and potentially top prospect Christian Yelich at some point, but none of them will be difference makers this season. With the current roster, the Marlins have a real shot at besting the marks for worst offensive team of the 2000's, and possibly of all time.

The only person that may be able to prevent the dishonor is young slugger Giancarlo Stanton. Stanton finished the last two seasons with wRC+'s of 140 and 156, and most experts pegged him for further improvement in 2013. He is struggling as much as anyone, though. In his first 52 trips to the plate (microscopic sample alert), he has hit .163 with just two extra base hits, surprising for someone with 80-grade power. The alarming thing for his season outlook is the way he is being attacked by opposing pitchers. With the dearth of talented hitters in the lineup around him, teams are simply choosing to take the bat out of Stanton's hands. Although he has just 1 intentional walk, his 33.9 Zone% is last in the Majors among players with at least 50 plate appearances, and his walk rate has nearly doubled from last season. If pitchers continue to work around Stanton, he will be hard pressed to carry the offense like he may be capable of. And that assumes that he stays in Miami through the entire season which is no certainty.

Not even a month into the season, it seems presumptuous to declare that any team has a shot to break records. However, Miami's putrid performance and season outlook make it possible. Will they be the worst ever? I will say no, simply just betting on improvement and some fortuitous bounces over the next five months. Still, while the masses have presumed the Marlins to be irrelevant this year, they could be chasing history all season long.

Thanks to Fangraphs for all stats and ZiPS projections.