Which parks have the most home runs hit per game at different areas in the park compared to average?

The day I found Hit Tracker (now-named ESPN Home Run Tracker) was a life-changing experience for me. At first I perused the site as normal people are wont to do, looking at the longest homers, finding hitters who are getting a little lucky, and reading about the physics of pokes.

Then I started to, well, do my thing. The first research I did on this data set was to create the Home Run Damage statistic, which I still feature on my personal blog, Steal of Home. Next, I confirmed that hitters who hit a bunch of "Just Enough" home runs actually hit fewer the following year.

But of course, that is not enough. Today I will look at a different part of the data, mainly horizontal exit angle. At which angle do most home runs leave the bat, how does this compare for different handed batters, and which parks are more conducive to different angled home runs?

The second important thing to talk about is horizontal angle. This is the exit angle off the bat, not the angle at which the ball landed. The best example of this I can give you is that one time Giancarlo Stanton hit a grand slam off Jamie Moyer (I'll wait for you to watch that video multiple times, get a glass of water, and regroup). The ball lands on the foul side of the right field line (past 135 degrees, knocking out part of the scoreboard), but it actually left the bat at 124.7 degrees and curved because physics.

Finally, I grouped home runs into nine buckets for two reasons. The first is to better explain the angles in terms of an actual baseball field, as shown in the following chart. The second is because I really like using the term "buckets" when talking about data.

I created an equation to determine how many home runs should have been hit at each angle at each park. This equation is as follows:

I didn't have the actual amount of games played at each park, so I just assumed a value of 81 for the amount of full seasons played there. The numbers are not 100% correct, but that does not change the conclusion.

The final thing to discuss is that the following results are not park factors. In order to calculate those, one must account for hitter quality in each park, particularly for the home team. That's not what I'm interested in. I want to see where more home runs are getting hit overall, regardless of hitter quality.

You may notice that Minute Maid Park is on the National League charts. This is because the Astros played in the NL for a majority of the time covered by the data set.

Before we get into the specific results, here is a chart that shows where right-handed and left-handed hitters hit home runs. 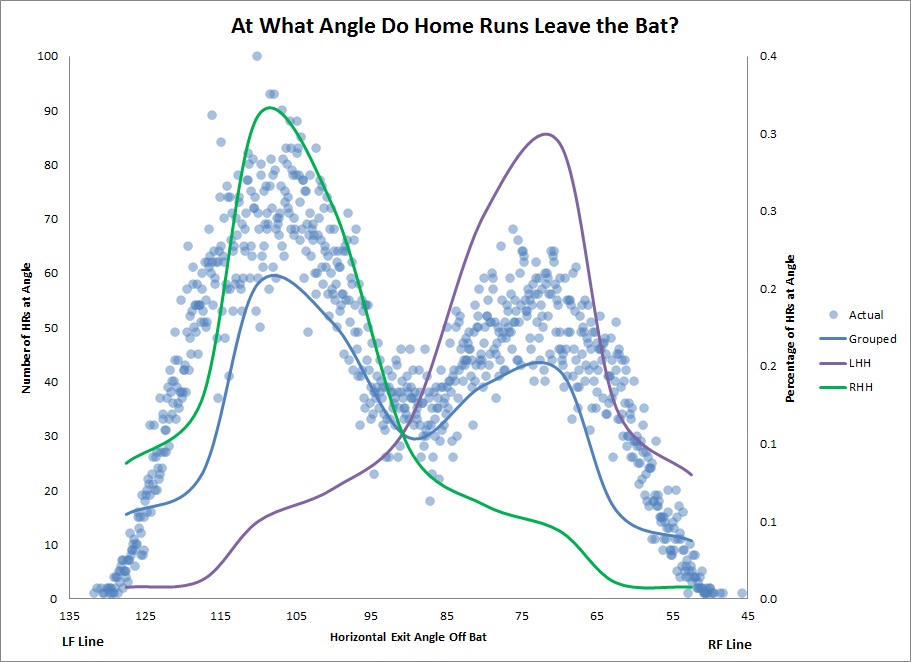 The blue dots represent the actual data points for each exit angle for all hitters and is the only one to use the total number of home runs y-axis. All others use the percentage y-axis. The blue line represents all home runs for all hitters, but the angles are grouped into the buckets shown above. The green line shows these groupings for right-handed hitters and the purple line is for lefties.

Another takeaway from this chart is that no home runs are hit past an exit angle of 132 degrees. This does not mean that they do not land on the foul side of third base, it just means that the ball tails a whole bunch when hit hard enough to get out of the park. 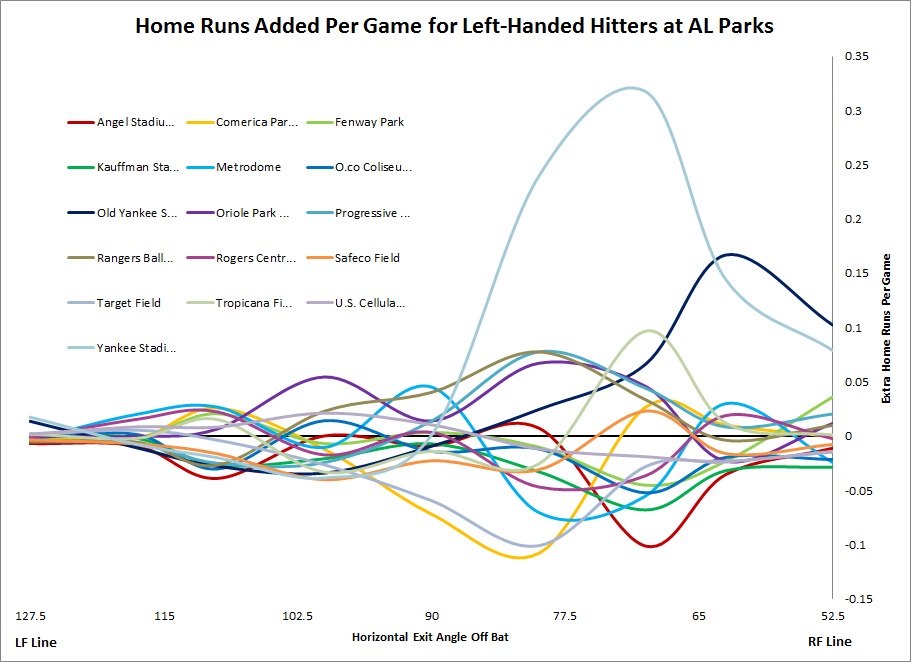 Oriole Park is the most extreme left-handed opposite-field home runs in the American League, but the Metrodome and Rangers Ballpark show favorable dimensions as well.

Four AL East stadiums - Yankee Stadium, Oriole Park, Tropicana Field, and Fenway all show up as giving up more home runs to lefties than average in one way or another. Perhaps this is a result of hitter strength, but at least some of it has to do with dimensions. If you're a lefty power-hitter, the AL East is the place to be.

And just for fun, how about the home run with the highest HRD value so far in New Yankee Stadium? Perhaps you remember Raul Ibanez vs. Chien-Ming Wang. 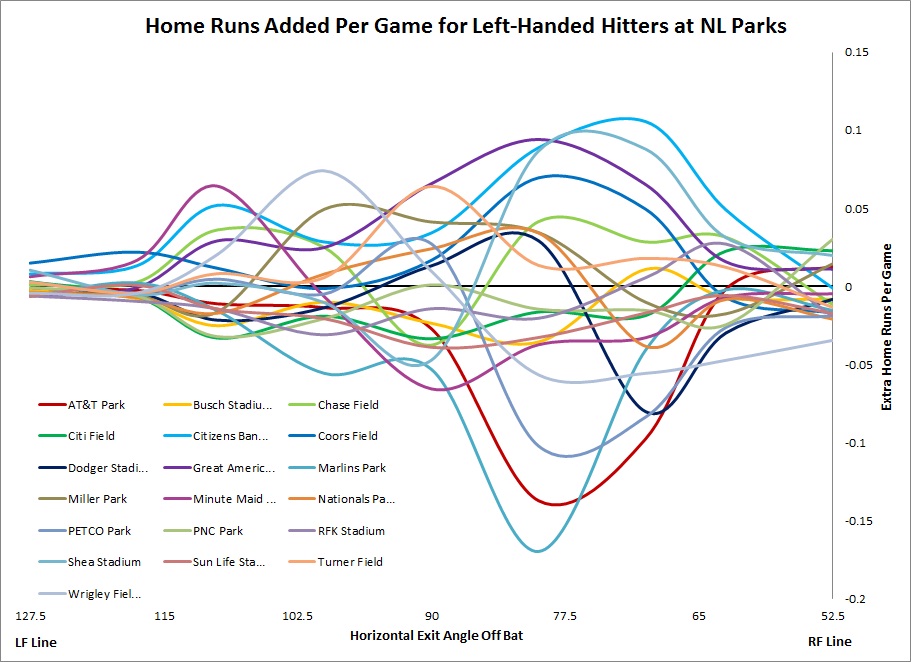 The NL graph looks a little more spread out, but that is due to the change in axis. Citizen's Bank Park, Shea Stadium (RIP), Great American Ballpark, and Coors Field are the top home run parks for lefties in the NL. Marlins Park, AT&T Park, PETCO Park, and Dodger Stadium all prove difficult for lefties to get the ball out. The Crawford Box effect can be seen for Minute Maid Park as it is one of the more difficult pull parks for lefties, but the easiest to hit home runs to left field. Wrigley Field follows a similar and even more extreme pattern.

Chase Utley, Ryan Howard, and Jarrod Saltalamacchia all hit more damaging home runs in Citizen's Bank Park, but why would you pass up the opportunity to watch Jim Thome hit a 466-foot moonshot? 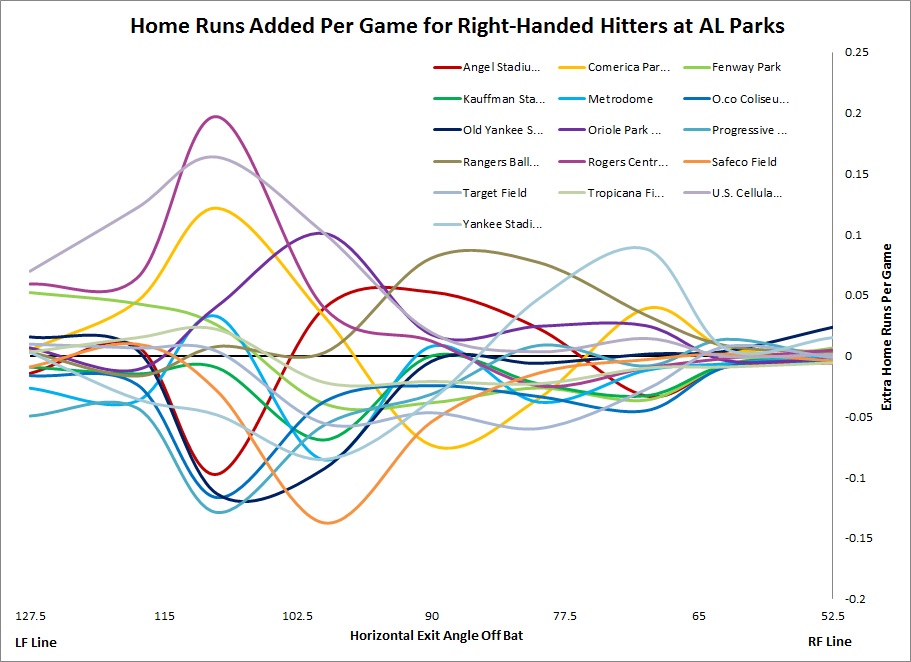 Rogers Centre has the highest HR/G added rate in left field, but U.S. Cellular shows a more consistent rate overall. Parks Oriole and Comerica give a slight boost to righties as well. Rangers Ballpark and Yankee Stadium are the best parks for opposite field blasts from righties and Angel Stadium gives them an advantage to center, which almost makes up for the disadvantage to left field.

You remember that scene in Nacho Libre where Jack Black sings Encarnacion a whole bunch? At first it annoyed me, but I'm starting to like it. Anyway, my wife loves it and whenever she hears Edwin Encarnacion's name on a baseball broadcast, she never fails to sing ala Nacho. When I hear his name, I think about home runs where the contact is so loud, it bursts your ear drums. 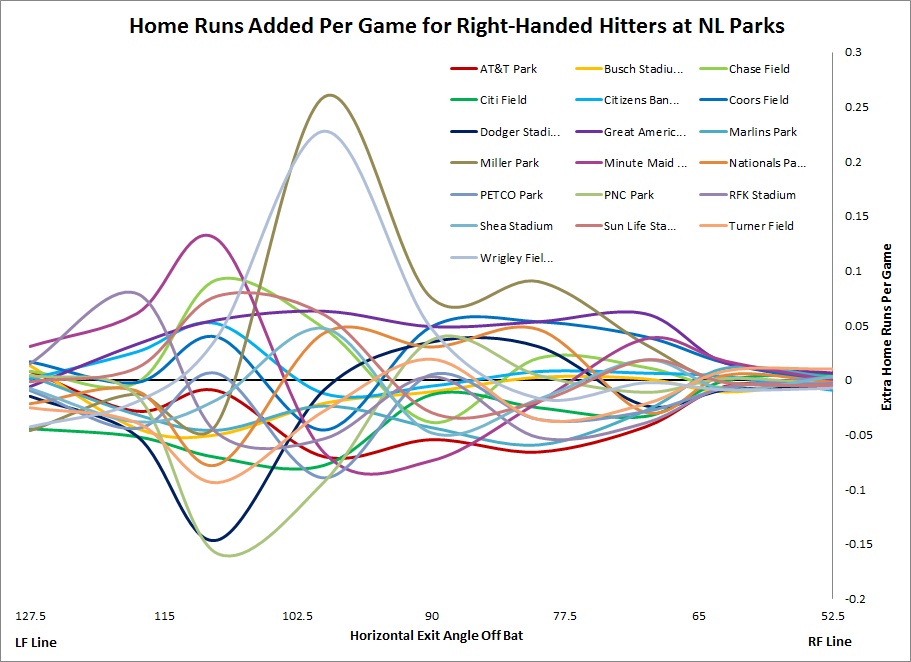 Again the scale is slightly different for the National League chart, but only slightly so. Miller Park and Wrigley Field definitely stick out above the rest. This is a bit of a surprise to me, as I have not heard of Miller Park being a particularly home-run friendly park. The Crawford bump shows for Minute Maid as well.

PNC Park and Dodger Stadium are the two most extreme NL Parks for fewer home runs than expected from righties.

The list of most damaging home runs in Miller Park starts and ends with Prince Fielder. However, this is a paragraph about right-handed hitters, so you'll have to make do with Ty Wigginton hitting a bomb off CC Sabathia. Ryan Braun and Rickie Weeks hit more damaging home runs, but highlights on MLB prior to 2008 don't work. 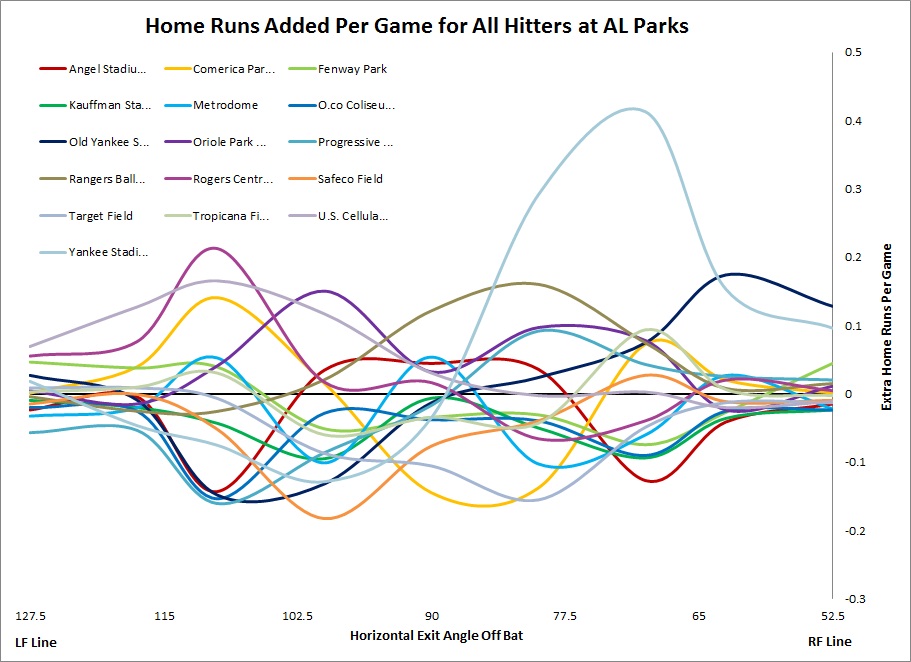 These graphs are a combination of the previous ones, where all hitters are compared. The New Yankee Stadium effect jumps up to 0.4 extra home runs per game, while Rogers Centre adds 0.2 home runs to left field. Perennial pitchers park Safeco field is consistently below average in left field leading to a league-worst 0.18 fewer home-runs per game in left-center, but is actually a bit above average in right. This is probably why the Mariners did not bring the walls in down the right field line when changing the dimensions this offseason.

Comerica Park and Angel Stadium follow a nearly opposite trend. Switch the two centerfields and you have a consistent hitters' park (Comerica) and pitchers' park (Angel Stadium).

You know who doesn't have a problem hitting home runs in the vicinity of center field? Wily Mo Pena, that's who. Just a side note on Pena, because he's such an interesting hitter. His 2.00 HRD/HR ratio for all home runs in the data set is the highest for any hitter with more than 20 HRs. Justin Upton is second with a ratio of 1.66. Let's just say he rarely got cheated on any of his home runs. 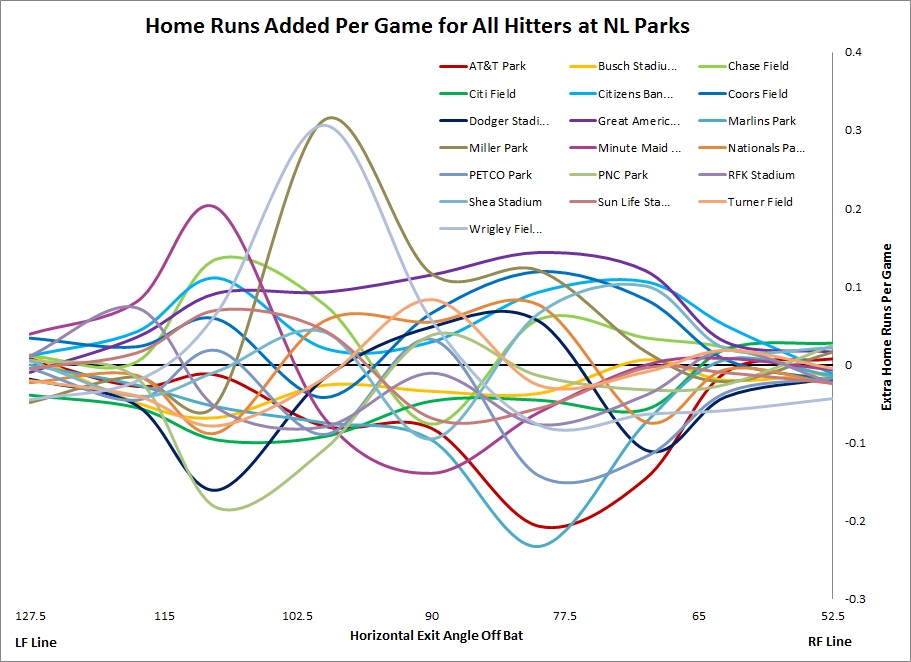 Miller Park and Wrigley Field still stick out, along with Minute Maid Park in left field. Great American Ballpark adds the most home runs in right field and is consistently above average all over. Marlins Park has a very similar trend to AT&T Park, but is not as bad to right and is a bit worse to left.

PETCO Park also changed its dimensions this year, primarily focusing on right field. Why? It had been the third highest park to depress home run per game totals to that area.

Since I previously mentioned Justin Upton, I thought it would only be fair to include a home run of his. Although it doesn't appear to be very impressive because of its location in the ballpark, this homer had the distance and speed to be the 19th most damaging since 2006.

The most neutral park according to this data is Busch Stadium. It has consistently fewer home runs per game than the average NL stadium, but its most extreme dimensions is only -0.07 to left field. The rest of the top five most neutral ballparks are Tropicana Field, Sun Life Stadium (in all variations of the name), Turner Field, and Kauffman Stadium.

The top five ballparks with the highest sum of the absolute value of home runs allowed per game at each angle are Yankee Stadium, Wrigley Field, Old Yankee Stadium, Miller Park, and Great American Ballpark.

A lot of this proves what we already knew. New Yankee Stadium is a bandbox, PETCO and Safeco are (or were, we'll see) pitchers' havens, and it's really hard to hit a home run to center field in Detroit. However, an important lesson is learned when comparing these parks using a ball in play locator like Katron. Overlay two extremely dissimilar stadiums like Rogers Centre and PNC Park, and it doesn't look like many home runs are lost in left field. However, I believe a large chunk of the home runs that appear to be over the wall would have actually hit the wall on the way down. Weather effects may be in play as well.

One study that may be interesting to follow up on this is to answer the question of whether hitters change their approach based on the stadium. I remember a few years back that a hitter (and I don't remember who) would always try for the Crawford Boxes when he played in Houston. Do righties try to pull more in Houston and push the ball to right in New Yankee Stadium? And what about the other side, do pitchers try to force lefties to hit more pitches on the outside corner in New York, making it more difficult to pull?

There are definitely some interesting game theory and player approach questions to be answered based on the various dimensions of individual parks. Until those are answered though, look at the pretty graphs, watch some Giancarlo Stanton home runs, and think about the word "buckets."