Looking at Justin Masterson through the lenses of PITCHf/x.

Justin Masterson arrived at Cleveland during the 2009 trade that sent Victor Martinez to the Boston Red Sox. During his time in Cleveland he's been a solid piece to the Indians' starting rotation. He's accumulated just under 10 fWAR, while posting slightly above average strikeout and walk rates. Masterson has started off the season on a strong note, so I thought I'd look at his PITCHf/x data and compare it to his career rates.

Masterson throws three pitches exclusively. They are as follows: a fourseam fastball that averages 93 MPH, a sinker that averages 91 MPH, and a slider that averages 83. He also occasionally throws a changeup, but he's only thrown it 196 times during his career, and none at all in 2013. For our purposes I will be ignoring the changeup.

His fourseam fastball has fairly average movement, although it's worse noting that it has slightly less vertical movement than average. In terms of overall results it's a pretty solid pitch. Career-wise it doesn't generate a ton of whiffs per swing - just over 14% - but it is able to induce ground balls just over 45% of the time. This season, Masterson's whiffs per swing are slightly down, but when using the fastball he's still getting ground balls half the time.

One area that he is struggling with is getting batters to swing outside the strikezone. While that number isn't extremely high for his career, his 16% O-Swing% is 7% lower than his career numbers.

His slider is probably his second best pitch that he throws. Career-wise batters whiff just over 36% of the time, while also hitting ground balls nearly half the time. In 2013, though, he's getting some mixed results. Batters are getting a large amount of whiffs, but the ground ball rate has fallen nearly 10% from his career average, and he's also seen his flyball percentage rise over 15%. Even though he's seen an increase in fly balls, he still hasn't given up a base hit with it.

A big reason for that is because batters are having a difficult time of making contact on balls outside of the strike zone. Batters are whiffing over 35% of the time when they do in fact swing. They hardly ever make contact, only managing to do so one third of the time.

Lastly is Masterson's sinker. One could easily argue that his sinker is the best pitch out of the bunch, especially in 2013. Career wise Masteron's sinker gets batters to hit into groundballs a robust 68% of the time, while whiffing slightly under 20% of the time. In 2013, his groundball percentage is essentially identical to his career norms, whiffs per swings 3% more of the time.

Like the slider, Masterson's sinker gets a fair amount of swings outside the strike zone, but his 70% O-Contact% is a lot more normal.

I also was curious to see how Masterson's movement from 2013 compare to his career movement, so I grabbed a couple of graphs from Brooks Baseball. 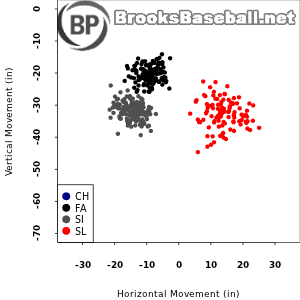 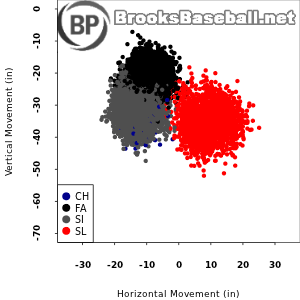 For the most part his movement in 2013 looks almost identical to what his career numbers show us. It does appear that his slider might be getting a little more movement than in the past though, specifically when it comes to horizontal run, going inside to lefties and away to righties, which shouldn't be surprising.

Masterson isn't necessarily an ace type pitcher, but he's still a guy who can go out there and give your ball club some nice starts during the season. He doesn't throw a ton of different pitches, but the three he does throw have been quite successful, especially in 2013. He's only 28 years old, so he should be an average to slightly above average pitcher in the majors for a few more years.

All stats and images are taken from FanGraphs and Brooks Baseball