Taking a look at the Three True Outcomes Rate for teams throughout history.

Share All sharing options for: Three True Outcomes Throughout History

The Oakland Athletics have seen more than 200 more pitches than any other team in baseball through the first few weeks of the season and have the league’s highest walk rate at 10.8 percent.

The Houston Astros have struck out a ridiculous 27 percent of the time, leading the Majors by far and looking good enough to obliterate the MLB record.

The Boston Red Sox are second in each of these categories.

Yes, as has been espoused ad nausem, we know the Three True Outcomes are on the rise. In a serious way. But what has mostly been looked at is the player level, trying to find out if guys like Adam Dunn could be the rare 50% TTO player.

Today I want to have a look at whether these teams, performing at extremes in our current small sample, have any sort of claim to being the Three True Outcome-iest team of all time.

I pulled data for all team seasons from the "Retrosheet Era" (1916 to the present). Below are the teams with the highest walk rates for an entire season.

The late 1940s seemed to be walk-happy at the high end, as most of these leaders are from that era, save for the 1999 Athletics and 2000 Yankees. Was this an unusually large time frame for walks? I plotted all individual team seasons over time to have a look. 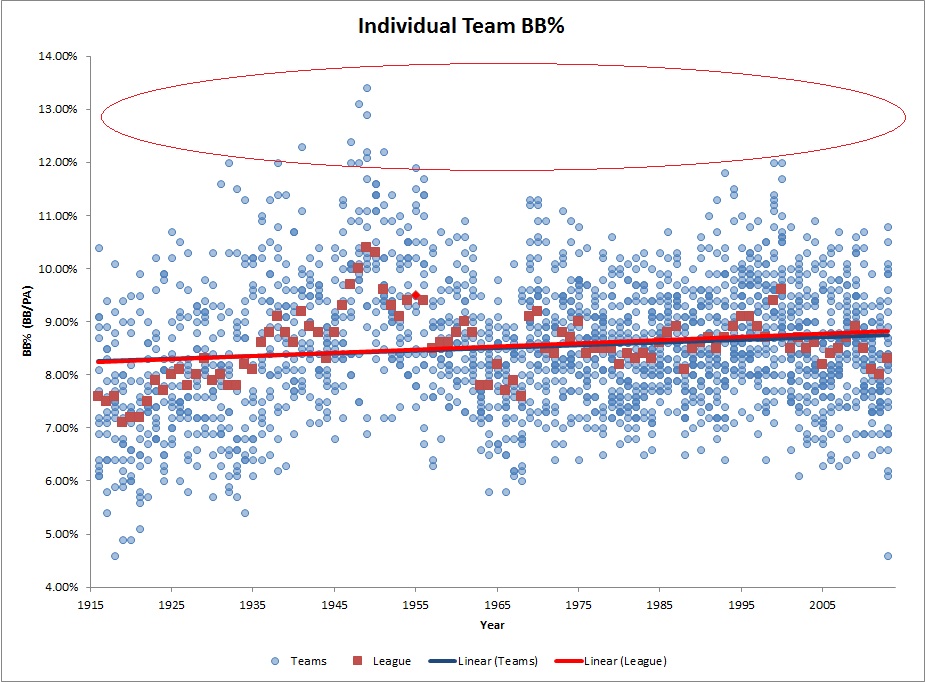 So it doesn’t appear that peak walk seasons have risen over time, which backs up what we know from that previously linked piece on TTO players throughout time.

This will be a bit more interesting since we know strikeouts have climbed a great deal (thanks primarily to called strikes. First, here are your top team seasons.

So, do you think teams are a bit more accepting of strikeouts now? This list is littered with current teams. Small sample caveats and all that, but that ish cray. The 2001 Brewers are the only team on the leaders prior to 2008. Let’s look at the same type of graph as we did for walks, plotting team seasons and league average. 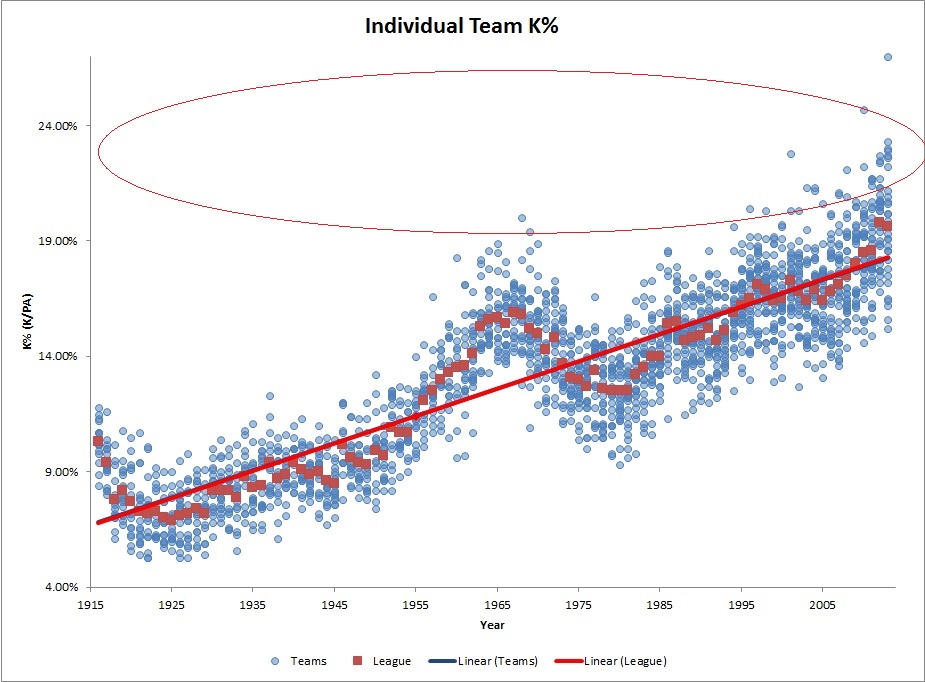 Obviously we’re witnessing a massive rise in strikeouts over time. We’re also seeing the first extreme strikeout teams over the past decade or so. Note that the lowest strikeout teams in recent years would have been the most strikeout prone in the league until the 1950s.

We see a bit more of a spread here, with the 1961 Yankees joining a bunch of teams from 1997 onward. And Vernon Wells having a massive impact, as we all predicted he would. Let’s once again take a look at how individual team seasons look over time. 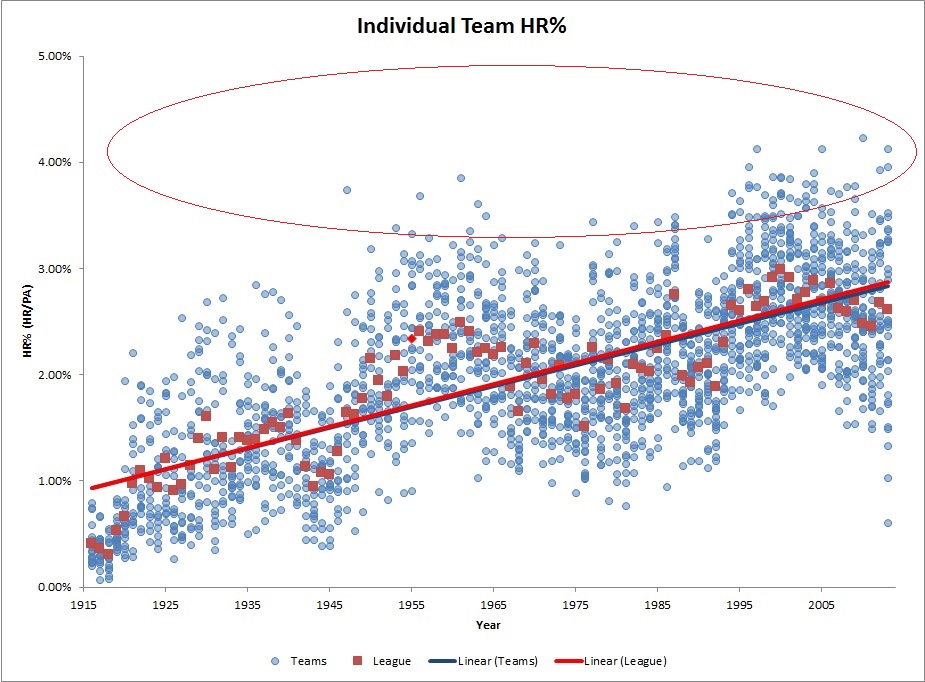 Again, we see a sharp rise over time, with the same bump in the 1960s that we saw with strikeouts. We also see that, while extreme home run seasons weren’t non-existent before, they’re certainly becoming more commonplace.

Now let’s look at all this junk together to see the movement of Three True Outcomes.

I simply added K%, BB% and HR% here, since they’re all using the same denominator of plate appearances. Your most TTO-heavy teams of all time are…

Your 2010 Arizona Diamondbacks put the smallest portion of balls in play of any team ever, posting a 37.11% Three True Outcomes Rate. This year’s Red Sox, Astros, Braves and Indians are all close behind in our small sample, before we get to a spread of teams spanning the 2000s…and the 1994 Detroit Tigers, oddly enough. Let’s see how these rates look over time. 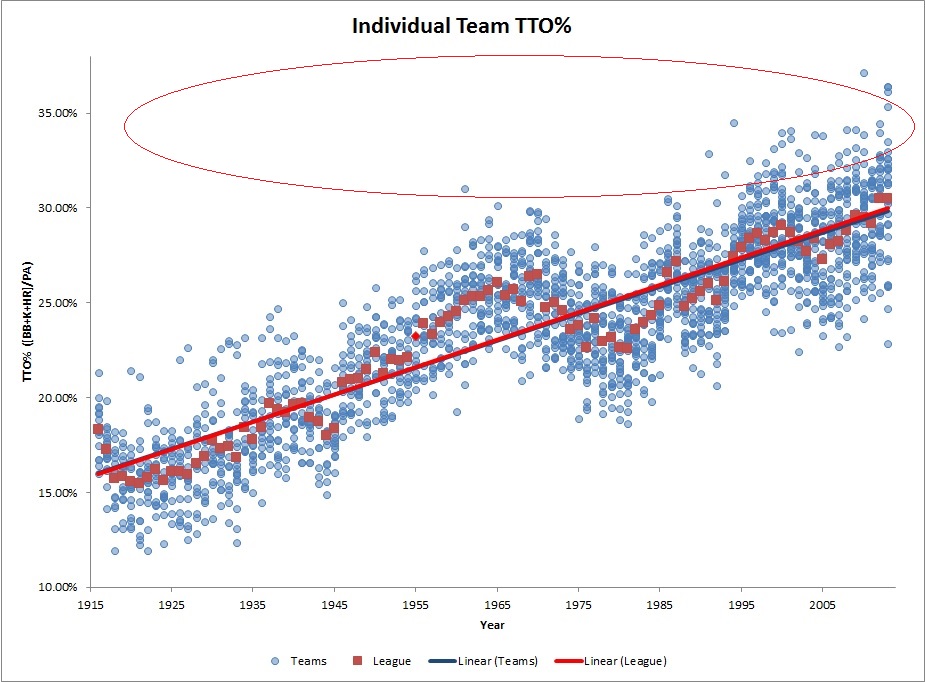 So we see a similar trend to strikeouts and home runs, which makes intuitive sense, especially since strikeouts are by far the highest percentage (and thus the largest proportion of TTOs). Like earlier, we see that teams with 30% TTO-rates are pretty new, save for the 1961 Angels.

What does this tell us?
Nothing that hasn’t already been discussed, really. We knew that TTOs were on the rise, especially strikeout rates, and now we can see graphically how individual team seasons have moved over time. We also know the bar that four lucky teams have to strive for if they want the TTO crown.

This is all just further reinforcement that baseball has fundamentally changed in how it’s played and how it’s evaluated. 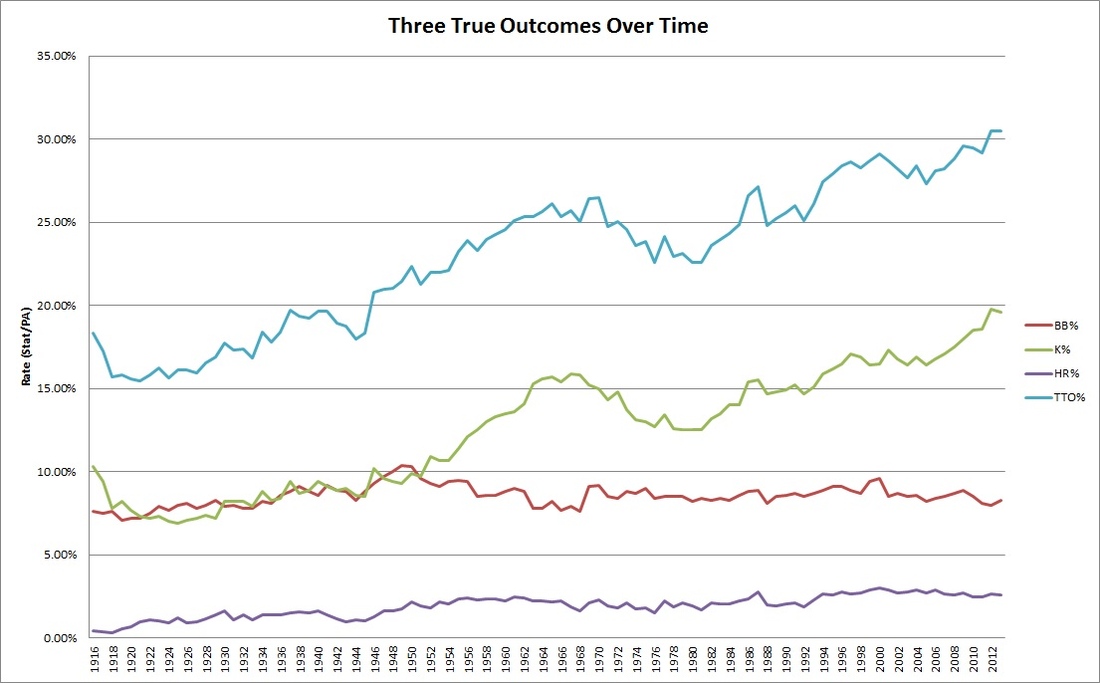