How Clutch Are Rookies?

Do rookies perform better or worse than the league in clutch situations?

Share All sharing options for: How Clutch Are Rookies?

I have wanted to look at how well rookies perform in the clutch for a while and I'm finally doing it. Fangraphs makes this data acquisition extremely simple, so I hope to answer a simple question: How do rookies perform in clutch situations compared to the league average? Are they overmatched? Do they get flustered? Are they oblivious enough to not let the situation bother them? All these questions and more will be approached!

Clutch, as defined by Fangraphs is "how much better or worse a player does in high leverage situations than he would have done in a context neutral environment." I like that it measures a player against himself. Rookies may not be as high quality of players as the rest of the league, but that doesn't matter in the calculation of this statistic. What matters is only how well they performed compared to their own skill.

I first found the league average clutch per plate appearance, then I summed the clutch scores for all rookies and divided that by total PA for every year since 1974. Finally, I subtracted league clutch per PA from rookie clutch per PA. I multiplied these numbers times 100,000 just to force the values to more normal looking whole numbers.

Throughout the post, I'll also be talking about win probability added (WPA). This measures "how individual players affect their team’s win expectancy on a per-play basis."

I will only be looking at hitters in this analysis for no apparent reason.

Here is the comparison graph: 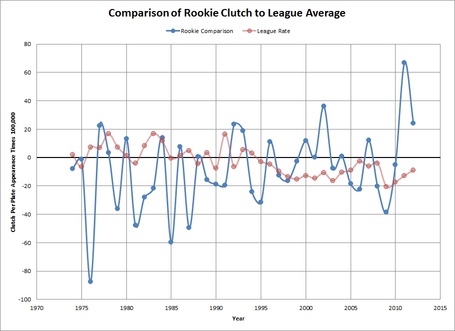 The blue line is the one of interest here. I included the actual league average clutch per plate appearance rate in red for context's sake.

Rookies performed better than average in the clutch in 16 of the 39 years represented, although in four of those years the difference is practically zero.

Two years stick out the most in this comparison: 1976 - the worst year for rookies - and 2011, their best year. In '76, no players stand out as having particularly bad clutch years. Jerry Mumphrey had the worst year with a -1.76 clutch score in 427 PAs, but that is only 42nd worst out of 1,703 qualifying rookie seasons. Only two people (Butch Hobson and Jim Essian) had a good year and eight had bad years.

2011 was by far the best clutch season for rookies. Six players had good years, seven players were great in the clutch and another seven were bad. No one was absolutely terrible. Who are some of those headlining super clutch rookies of 2011? Rene Tonosi, Michael Martinez, Desmond Jennings, Daniel Descalso, and Josh Harrison.

In the entire data set, four player seasons are worth mentioning in more detail. For all players, 1996 Troy O'Leary had the highest clutch per PA score and 2005 David Ortiz had the highest total clutch score. On the rookie side, 2010 Brooks Conrad had the best Clutch rate and 1986 Wally Joyner accumulated the most clutch points.

Troy O'Leary, he of the career 8.3 fWAR and 1.44 WPA had one season where he was the most clutch player since at least 1974. His three most clutch games of that year occured on August 2nd (game-winning two-run triple), August 25th (fourth inning three-run home run down by four), and July 11th (double in the second inning, down by three).

2005 was in the peak of Ortiz's career. Not only did he have 5.1 fWAR that year, he also added an 8.21 WPA. His most clutch game was May 19th, when he hit a two-run home run in the fifth inning while the Red Sox were down by three. The clutch statistic certainly provides some odd examples of extremes.

Brooks Conrad is probably more known for being non-clutch in 2010 after he infamously committed three errors in the third game of the NLDS. However, with the tight race in the NL wild card that year, the Braves may not have even made the playoffs without his good performance in the clutch, particularly late in the regular season.

Wally Joyner played in parts of 16 seasons and none of them matched the clutchiness he showed in his rookie year. Fangraphs doesn't have his game logs, so I can't find his most clutch games, but he did have three occurrences with a WPA greater than 0.6 according to baseball-reference: April 26th, May 26th, and July 10th. Joyner twice hit ninth-inning game-tying home runs and once scored on a 12th inning wild pitch to give the Angels the lead. Essentially, this is a group of random performances. Players were put in a high-leverage situation, performed well in it, and basically never repeated it again.

Let's switch to the red line instead because I want to talk about an actual trend: the league average for clutch has been below zero since 1994 and reached its historic low in 2009. My initial explanation for this is relief pitcher specialization. The clutch statistic measures how well a player performed in a high leverage situation compared to his performance on average. If opposing managers create an environment where players are less likely to succeed in high leverage situations, this could create a poor league-wide execution in the clutch.

As is generally the conclusion when studying clutch: There's not much measurable skill here. In general, rookies tend to perform worse than average, but a lot of times they do better. The biggest takeaway from this analysis doesn't even have to do with rookies: the league has not had a positive clutch score since the early 1990s and I think that has a lot to do with relief pitcher specialization.