The Rangers' southpaw arrived in the big leagues with scouting reports touting his changeup as his best offspeed pitch. We examine the decline of its success at the major league level and a potential rebound in 2013.

Heading into the 2009 season, Baseball America touted Texas Rangers pitcher Derek Holland as the number two prospect in their rich farm system, slotting him right behind Neftali Feliz and just ahead of Justin Smoak and Elvis Andrus. The scouting report on Holland's repertoire at the time touched on his secondary offerings as follows:

Holland's second pitch is a slightly above-average 81-83 changeup with good arm speed and fade. He's confident enough to use it in any count.

With this as a background, let's review the history of Holland's changeup at the major league level. To start, consider how often he has thrown his supposed best secondary offering to both right and left-handed hitters, both in general as well as in specific count states to see if he has truly been comfortable using it in any count. 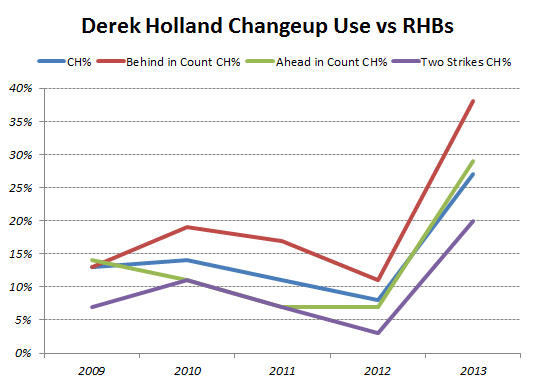 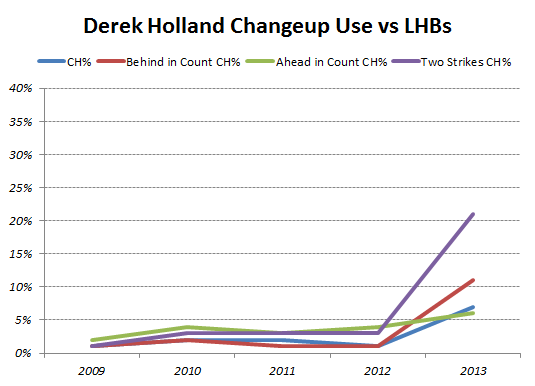 Not surprisingly, Holland uses his changeup much more frequently against opposite-handed hitters. Looking at the yearly trend, we see that his overall changeup usage stayed close to the 10% usage level over his first three seasons at the major league level. The last two seasons are where things get even more interesting. In 2012, Holland shied away from his changeup, using it just 6% of the time. In stark contrast, in the early part of 2013 he has pulled the string in 21% of all pitches.

I am not the first person to notice this revival of the changeup. As early as the All-Star break last season, Holland worked with minor league pitching coach Terry Clark while on an injury rehab assignment and reported a rediscovered feel for his circle change. An ESPN article recently noted that Holland worked on his changeup during spring training to regain the feeling for it such that he could keep it as a weapon in his pitch arsenal.

One caveat here is that the percentages in the graphs above include all games tracked by Brooks Baseball in a given year, which would include preseason and playoff games. While Holland has thrown changeups much more frequently this year, part of the reason for his high total changeup count is that he worked on it during spring training games. If we focus only on his two April starts, he has still thrown 20% of all pitches for changeups, but exclusively to right-handed hitters.

It is interesting to note that Holland experimented with his circle change as a strikeout pitch against left-handed hitters in the early part of spring training. He seems to have abandoned that idea as the season approached, and now in his first two starts has only featured his changeup against right-handed batters.

We can examine his 2013 changeup in a few ways in comparison to previous seasons. Of course it is early in the season, so we're working with small sample sizes for this year. The interesting thing to note, however, is that due to his affinity for the changeup to date in 2013 and the scarcity of its use in 2012, he has already thrown more than half the number of changeups this year compared with the entire 2012 season (with spring training games included).

Consider the following table, showing the total number of changeups thrown by season, the number of them that ended plate appearances and the Baseball Prospectus True Average (Tav) against these pitches.

Again, it should be pretty clear that the sample sizes are small here, in particular if we discount the weight of his spring training performance given the questionable quality of the hitters he would have faced.

Nevertheless, it is a promising sign that Holland has regained the confidence in what once was his best secondary offering. Another way to look at his changeup in the early part of this season compared to others is by comparing the velocity difference between his four-seam fastball and his changeup.

Clearly in the early part of this season, he has achieved a larger difference in speed between the two pitches. While this is not direct proof of anything, it is an interesting observation. It is also interesting that in the ESPN article linked above, it describes Holland as thinking that he has the best feel for his changeup since 2010, which is the season other than 2013 where he had the greatest difference in velocity. September 2010 was also the last time he posted a stellar Tav on changeups over the course of a month, at a sparkling .157.

I should note that this augmented velocity gap in 2013 has arrived through a slower changeup as opposed to a faster fastball. Holland has thrown his average changeup so far in 2013 almost 3.5mph slower than it was last season, which seems like a major difference to me.

It would also be prudent to point out that PITCHf/x data is not perfect, so velocities can be off slightly from stadium-to-stadium and game-to-game. Certainly one unfortunately calibrated camera setup in a stadium could skew the results from a handful of starts, but I have taken the reported results at face value. Classifying pitch types is also of concern, but by using Brooks Baseball I believe that I am using the most accurately classified pitch database that is publicly available to mitigate this issue as much as possible.

It would appear Derek Holland has rediscovered the feel for his circle changeup, and is throwing it more often to right-handed batters than he ever has before at the major league level. We'll have to watch if this trend continues as the 2013 regular season marches on, whether he starts to mix a few changeups in to left-handed hitters, and whether batters are able to adjust to the pitch that they now have to be more prepared to face when they step into the box against Holland.

Credit and thanks to Brooks Baseball for data upon which this analysis was based.