From 2008-2011, Ubaldo Jimenez was one of the better pitchers in all of baseball. During that timeframe he accumulated nearly 20 fWAR while posting a 3.47 FIP. What makes that more impressive is the fact that he pitched the majority of his games in Colorado, which, as you all know, is a notorious hitters park.

In 2012, when Ubaldo was in his second year with the Cleveland Indians, he was a totally different pitcher, and it wasn't for the better. He was one of the worst pitchers in the game, and finished the year with a .1 fWAR, essentially replacement level. In this piece we'll look at some PITCHf/x data to see if we can discover the cause of such a rapid decline.

During his 20 WAR stretch, Ubaldo had one of the nastiest four-seam fastballs in all of baseball. It averaged over 96 MPH, and had more movement than average. While he was having his most successful years, his four-seam fastball wasn't even his primary pitch. According to Brooks Baseball, Jimenez's most used pitch was a sinker that sat around 95-96 MPH.

When he did use his four-seamer, however, he had great success with it, getting ground balls over half of the time and whiffs on nearly 20% of swings. His sinker saw similar success, also inducing ground balls at an extremely good rate. In fact, during the 2009 season he induced ground balls almost 60% of the time when throwing the sinker.

His repertoire also features a slider, change-up, curveball, and, according to Brooks, a splitter introduced in 2011. Before his epic downfall, each of the pitches that I mentioned (minus the splitter) were all pitches that got good results. They got their fair share of whiffs, as well as their share of ground balls. It looked like Jimenez was primed for an excellent career.

Now I know I included Jimenez's 2011 season in that above 20 fWAR sample, because overall it wasn't a bad year. He had over 3 fWAR, and all in all it was a solid year. That doesn't mean there weren't concerning factors though. In fact, there was one extremely concerning factor: the loss of velocity on his four-seam fastball and sinker. From 2010 to 2011 his four-seam fastball went from 96 MPH to 94 MPH, and his sinker went from 97 MPH to 93 MPH.

Jimenez's ground ball and whiff per swing rates didn't see a giant change, but the one area overall that got affected the most was his HR/FB%. In 2010 that mark was just over 5%, but in 2011 it nearly doubled to just over 9%.

2012 is where it gets really concerning though.

In 2012, Jimenez saw his four-seamer lose an additional mile per hour of velocity, while his two-seamer remained constant at 93 MPH. Notably, his four-seamer's whiff per swing percentage saw a 7% decrease, going from 20% to roughly 13%. His ground ball percentage on the pitch fell 6%, going from 41 to 35%. Needless to say, that is extremely concerning. His two-seam fastball saw similar results, although the groundball percentage took a bigger hit, dropping nearly 13%. 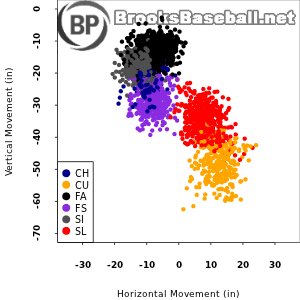 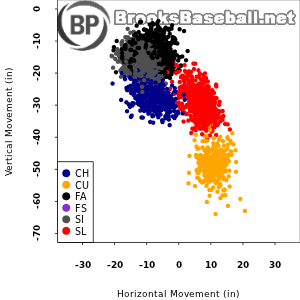 In regards to his movement, here are two charts: the first one is from his 2012 season, while the second one is from the 2009 campaign. The most notable thing is obviously the addition of a splitter, and in 2012 it appears that he has additional movement on both his slider and curveball. Besides that it doesn't appear like there was a big change in anything.

Another possibility could be that he just began to break down.

If you've seen him pitch, you'll know that his wind-up isn't exactly the most fundamentally sound wind-up in baseball. Just looking at him pitch could cause anyone to feel pain in their elbow, so it wouldn't be a surprise if that was his ultimate downfall.

After looking at Jimenez, the most obvious thing that we can see is that he lost nearly 7 MPH combined between his four-seam and sinker. Pair that with a horrifying wind-up, and we might have the reason why Ubaldo literally fell off the map. Still, there might be some other reasons, but I don't know if we'll ever really know how Ubaldo Jimenez went from one of the better pitchers in the game, to one of the worst.

All data was used from Brooks Baseball and FanGraphs.