The Perfect Two-Headed Monster: Theoretical Performance of an All-Platoon Team

Using "Platoon Score" we locate players at affordable prices that would provide great value in duos. Then we assemble an entire lineup of 18 players rotating according to handedness. Lastly, we evaluate the effectiveness and value of this theoretical team by creating theoretical WAR totals.

Share All sharing options for: The Perfect Two-Headed Monster: Theoretical Performance of an All-Platoon Team

A week ago, I wrote an article on players that would best serve their teams as platoon players. I used a methodology to isolate the players that had the best improvements in performance based on facing a southpaw or a righty.

For a refresher, I will review the methodology. We created RIGHT and LEFT -- measuring skill against right-handed pitching and left-handed pitching. But we have made a few changes to localize those who would provide the most value in a platoon rather than improve the most.

We can use RIGHT and LEFT as context for which side the player hits better. Using the z-scores of both RIGHT and LEFT, we will create a platoon score by finding the absolute value of the differences of the z-scores.

The higher the z-score, the more the reason to platoon that player for his favorable side. However, we must also look at the RIGHT and LEFT totals to tell us which side the "Platoon Score" favored.

Now that we have that update, lets put Platoon Score to work:

"Platoon Score" is a better descriptive tool than a predictive one (r = .16 year to year), so the only useful way to use it is in retrospect.

For that reason, let's pick all the players whose "Platoon Score" suggests that they should pair-up, then create an 18 man rotation with a platoon battery at each position.

Now this is a theoretical creation of a lineup, but we will assume that this team faces the league average distribution of lefties and righties. As a result, we will scale each player's WAR totals to their expected PA in this configuration.

Buddy up! Players who should be platooned in 2013 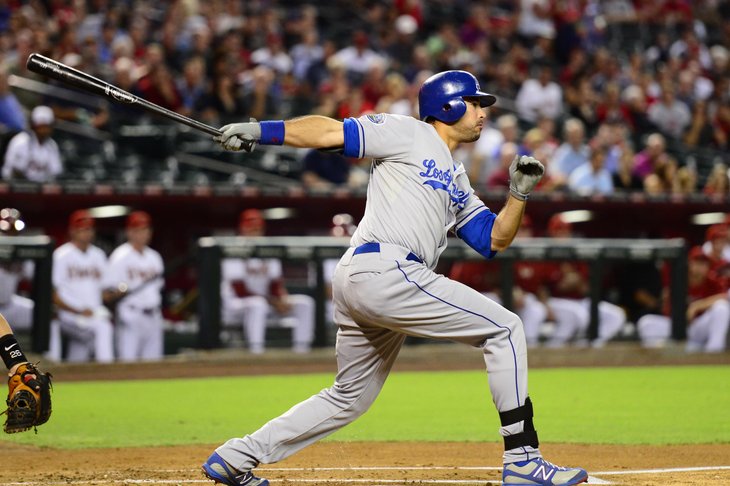 Read about the methodology behind RIGHT and LEFT platoon scores here.

At the end we will evaluate the performance of this team in context to the league.

The league average team PA against righties last season was 4,307 PA and 1,831 for lefties. So in any platoon situation the right-handed hitters are going to much more playing time, if we assume that they stay healthy for a full season (which we will for practical purposes).

We will go through each tandem, project their WAR totals for this theoretical season and make an accumulative assumption on this process. But our calculation of WAR will be very raw and just give us a snapshot of what this setup would do under real life circumstances.

Using this formula we will calculate WAR, as suggested by Tom Tango here:

This would be switched if we used a LEFT rotation player instead:

We will adjust for replacement: PA/312.5

Next, we adjust for positional replacement values. Meanwhile, our distribution of PA for RIGHT is 490 and LEFT is 210.

For catcher, "Platoon Score" has selected Wilin Rosario to face lefties and Alex Avila to spend his time against righties.

Rosario's wOBA against lefties last year was 0.479 compared to a .201 wOBA against righties, so using the formula above, we get this:

Using this same method for both players we get the following results:

[Note: these are theoretical results, not the actual 2012 results -- also players with large contracts were not chosen]

Platoon Score yielded the following two players as the best candidates for a platoon at 1B:

Once again we will use the same methods as above:

Lets add up all the theoretical WAR totals of our team and analyze where they would rank in the league in 2012:

That total team WAR total would be good for second in the league, not bad for a team full of journeymen and pre-arbitration players. Also, that is before this theoretical team's value is adjusted for base-running and fielding.

There are a few inefficiencies about this methodology that I would like to point out and later improve upon:

1) For the next installment we would need to create an optimized lineup so that we can more accurately scale the PA by batting position in the order. So in the comments below please tell me how you would optimize the batting order for LEFTY and RIGHTY dominant rosters.

2) We did not calculate the pitching side of this team, so basically we are assuming league-average pitching performance.

3) Fielding is devoid from the measurement of value and instead we are using an offensive value of WAR -- scaling fielding and base-running might best be done by bootlegging.

In next installments I would like to improve upon these inefficiencies, but for now I think this methodology gave us a nice little snapshot of the value of an all-platoon team. Maybe someday a front office pioneer in a small town might be inclined to bring this theoretical exercise to life? Now that would be fun!

Big thanks to Lee Trocinski (@Lee Trocinski) and Stephen Loftus for some huge methodology help.