Kansas City traded away a prized prospect to get Tampa Bay's James Shields. What can they expect from the right-hander in 2013?

The Kansas City Royals, needing to shore up a starting rotation that lagged behind a great bullpen last year, took a big gamble this offseason. They traded away über-prospect Wil Myers and got in return Shields, an extraordinarily durable starting pitcher (nicknamed "Complete Game James") who finished 3rd in AL Cy Young voting in 2011. 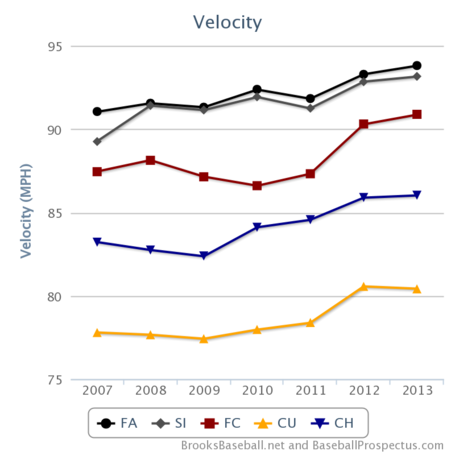 I’m not in love with his mechanics—he externally rotates his pitching arm too much in his delivery for my taste—but you can’t argue with results. He has started exactly 33 games for five consecutive years, for a total of 165 starts. Only Justin Verlander has more. Ever since he underwent shoulder surgery as a minor leaguer in 2002, Shields has not had any kind of arm problem causing him to miss time. He’s 31 this year, but without a history of arm troubles I wouldn’t expect him to be a Tommy John surgery candidate.

Shields is a serviceable fielder, with a .947 fielding percentage and average-to-good range. Not a liability. He’s also been pretty good at holding runners throughout his career, and he somehow picked off 12 runners in 2011. (Don’t expect that to happen again this year, though.)

I’m not going to wade into whether Kansas City made a worthwhile trade to get Shields, but I will say that he should provide the organization excellent value in 2013. He will anchor an improved Royals rotation and is the kind of innings eater that saves young bullpens from overuse.

As I said above, a repeat of his masterful 2011 season is optimistic. It would also be unusual for him to continue gaining velocity as he has the last few years. Still, his improved strikeout rate and track record point to a solid season that will make his $8 million salary seem like a bargain.