Bud Norris pitched an effective game last night, but how exactly did he do it?

Share All sharing options for: Bud Norris and pitching with two pitches

First of all, baseball is back so nothing else matters in all of the world ever again. Second of all, there was quite a fascinating pitching performance going on as we watched Opening Night.

Astros starting pitcher Bud Norris threw 5 2/3 innings and allowed only two unearned runs. Obviously this doesn't seem like much at face value, but a deeper look into the outing reveals some interesting patterns.

Common wisdom dictates that a starting pitcher needs three pitches to turn a line-up over: a fastball, a breaking ball, and a change-up for batters of the opposite hand. A good deal of pitchers will mix in a variation of a fastball, mainly cutters and two-seamers.

While I am not a PITCHf/x guru, as someone who does a good deal of scouting, I couldn't help but notice the manner in which Norris was relying on the fastball-slider combo.

Tonight, it appears as though Norris pitched his way through those 5 2/3 innings on the strength of his four-seam fastball and his slider (which appeared to be a cut-slider). Before we dig too deeply into this, I want to mention that I am analyzing Norris from last night, and not anything more. I also should mention that such a small sample of PITCHf/x data may not be fully reliable yet.

To right-handed batters, Norris was mainly using his fastball-slider combo. According to Brooks Baseball (chart below), he threw only one changeup to a right-handed batter. The pitch appears to be a sinker though, not a changeup. 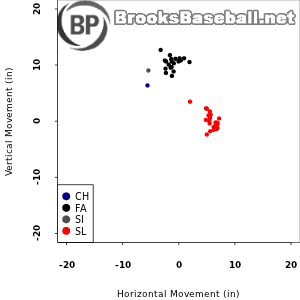 In total, he threw 20 fastballs and 24 sliders to the right-handed hitters. The whiff/swing on the fastballs was a meager 11.11%, but the whiff/swing against the slider was a much more impressive 46.15%. The fastball appeared to have late life on it, and the first time through the order hitters were unable to square it up. The 44.44% foul/swing rate exemplifies this.

The slider was effectively set up by the fastball, as he went to the fastball-slider sequence to strike out Mitch Moreland in the second and Elvis Andrus in the 6th.

To get back to right-handed hitters, I thought Norris did a good job of using his fastball, and trusting it in most counts. One pitch that stood out to me was the whiff he got with the fastball on a two-strike pitch to Elvis Andrus in the 1st innings. He simply dialed his fastball up to 94 and put it up in the zone, and Andrus was unable to make contact with it.

Against lefties, Norris used his changeup sparingly. According to Brooks Baseball, he threw his changeup 10 times in total, and had very mixed results. 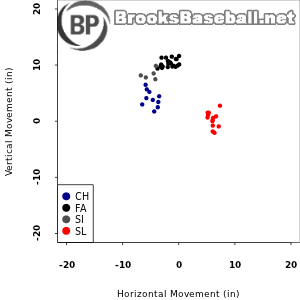 Although he had mixed results against lefties, he still was able to pitch very effectively tonight. His mixing of the fastball-slider combo, with the occasional changeup, was able to get him through the line-up a couple of times while staying relatively effective.

Now, none of this is conclusive analysis on the capability of Norris going forwards. I noticed something in his pitching strategy tonight and chose to write about it, but this is in no way making a long-term statement about Bud Norris as a pitcher.

The long-term conclusion to draw from Bud Norris' performance tonight in this: he is a good pitcher, and if he can effectively mix his stuff and keep hitters off balance, he should have a good deal of success this season. For a team that is supposedly bereft of talent, Norris could be a fun pitcher to watch this year.