The SPRiNG Projections for 2013 MLB Standings

What can the spring standings tell us about the upcoming season?

Share All sharing options for: The SPRiNG Projections for 2013 MLB Standings

A year ago, inspired by the notion that the better team is always more likely to win no matter how small the sample size, I did a study of the relationship between spring training records and regular season standings. Perhaps surprisingly, I found that about 11 percent of the variation in teams' end-of-season records could be explained by the talent they showed in the preseason.

Inspired by my findings, I developed the Simple Projections Rooted in Non-seasonal Games projection system—or SPRiNG for short. SPRiNG is incredibly simplistic and should hardly be considered a substitute for, say, PECOTA, but it does work better than, say, guessing that every team will play .500 ball. In its inaugural season last year, SPRiNG correctly predicted four of the 10 playoff teams (a very modest success, but better than you'd expect from picking teams at random) including that the Oakland Athletics would win the AL West.

So let's take a look into SPRiNG's crystal ball. What's in store for the league in 2013? 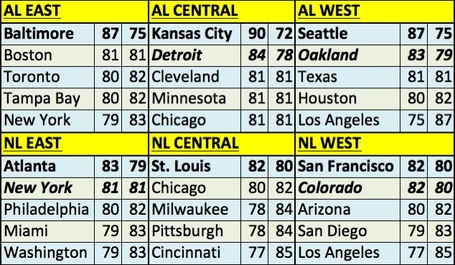 Well this is interesting. At least three of SPRiNG's playoff picks—the Cardinals in the NL Central, the Giants in the NL West, and the A's for a wild card—look pretty solid. The Orioles winning the AL East, the Tigers taking a wild card, and the Braves winning the NL East also seem plausible.

The rest of the picks? I think they might be an April Fool's joke. I can maybe possibly get my head around the idea that the Mets and Rockies will win wild card spots. But if we see a Royals vs. Mariners matchup at any point in the 2013 postseason I will eat a cactus and/or grapefruit. (Probably just the grapefruit.)

Beyond the playoff picks, SPRiNG's projections return some surprising results. The Blue Jays come in at under .500. The Royals win 90 games. The Nationals, Reds, and Dodgers all finish in last place—and the Astros don't. And the entire AL Central finishes at or over .500.

Another interesting thing to note is the American League's clear supremacy in the standings. Just four NL teams project to win more than 81 games, while just five Junior Circuit clubs project to have losing records. Obviously that has something to do with the greater proportion of interleague games in the preseason than in the regular season, but I found it striking nonetheless.

So, there are your SPRiNG projections for the 2013 MLB season. I hereby endorse all of it as 100% guaranteed to happen.