Is It Lights Out for the New York Yankees and Mark Teixeira?

The New York Yankees can't seem to catch a break this spring. First baseman Mark Teixeira is out for upwards of three months to begin the regular season and it's likely the worst has yet to come.

Share All sharing options for: Is It Lights Out for the New York Yankees and Mark Teixeira?

The hits keep on coming for the New York Yankees and I don’t mean in a good way. First it was Alex Rodriguez, then it was Curtis Granderson, then it was Phil Hughes and now it’s first baseman Mark Teixeira getting injured and will miss up to 10 weeks to start the season with a wrist injury (it’s being described as a strained tendon in his right wrist).

Jeff Sullivan from FanGraphs commented that:

Teixeira’s going to do nothing for four weeks, then he’ll begin rehabbing, provided everything has healed up. According to the timetable, Teixeira should return to the Yankees around the middle of May. In theory, he’ll be 100%, but this is a wrist injury, so it’s possible Teixeira could play with diminished power. No hitter ever wants a wrist injury. Actually no hitter ever wants an injury at all. Who would?

The one hitter the Yankees didn't want to face any kind of set back to being the season was Teixeira for his notorious ability to get off to incredibly slow starts to just about every season over the course of his career. His .238/.342/.423 batting line through 949 plate appearances over 214 games in March/April tells us all we really need to know. Teixeira is the type of hitter that needs to step into the batter’s box around 100 times before he really gets going and that’s during the regular season.

It’s not enough that Teixeira routinely gets between 50 and 60 plate appearances in Spring Training, he also needs around an additional 100 before he’ll start producing for you offensively. This is the real story here because even though he should return around the middle of May he still won’t truly be ready until at least June. Can the Yankees really handle not having his bat in the lineup through May and then not having his bat produce until well into June?

This may not be the worst of it for Teixeira or the Yankees though as a trend has really started to take shape. Big Tex has seen his OBP, wOBA, and wRC+ decline in four consecutive seasons and even more troubling is that he no longer appears able to hit for contact against right handed pitching. Over the last three seasons he has a .236/.333/.451 batting line, a .343 wOBA, and just a 112 wRC+ against right handers.

At 32 years of age you don’t want to think that he’s starting to break down but he turns 33 on April 11 and history is not on his side. As you can see from the aging curve for hitters that Jeff Zimmerman put together we can expect Teixeira to have a decrease in walks and an increase in ground balls and strikeouts, which is something we've already begun to witness with regard to his walk and ground ball totals. 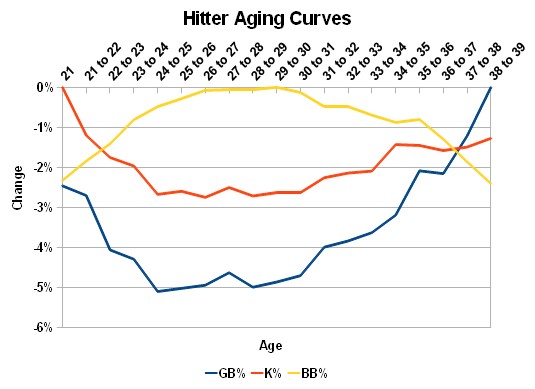 Jeff Zimmerman used the delta method to weight the work of players in each age bracket.

It will be interesting to see if Teixeira continues to age in the manner consistent with Jeff's findings or not. One thing's for sure though, the Yankees may be able to afford the money still owed to him but they cannot afford to have another veteran slugger experience a steep decline in his overall performance.