Ryan Vogelsong has had a rather interesting career path. From 1998 to 2006, Vogelsong played with four different organizations, with the majority of the years being spent with the Pittsburgh Pirates. Vogelsong wasn't very good - essentially a replacement to below replacement level player. 2004 was the only season in which he pitched more than 100 innings in the majors, and he was pretty bad to say the least. His 5.55 FIP was one of the worst in baseball, and his walk rate and strikeout rate were some of the worst as well. After that horrendous season, Vogelsong failed to make a start in the majors until 2011.

In 2007, Vogelsong was sent to Japan and stayed there for three seasons, then returned to the majors in 2010. He made stops in the Phillies and Angels organizations before finally returning to the place where his MLB career started: the San Francisco Giants.

During his first tenure in the majors, Vogelsong featured a fourseam fastball*, sinker*, slider, changeup, and curveball. Since only BIS data was available for the first part of his career, we won't get great results, but it's the best we have.

In 2004, the only year he made a substantial number of starts, Vogelsong primarily use his fastball, throwing nearly 75% the time. From time to time he would mix in an off-speed pitch, but not nearly as often as one would expect.

*FanGraphs lists fourseams, two-seams, and sinkers under a generic fastball category, so I am just assuming he threw a sinker since PITCHf/x says he's used one the past seasons.

One thing that really sticks out in the plate discipline statistics is that he really struggled at throw first pitch strikes. For 2004, the league average F-Strike% was 58%, and Vogelsong only threw strikes 56% of the time, a slightly below average mark.

In 2007, Vogelsong was sent to Japan, and while it isn't much, Paul Newman was able to supply us with some 2009 PITCHf/x data of Vogelsong's time in Japan. 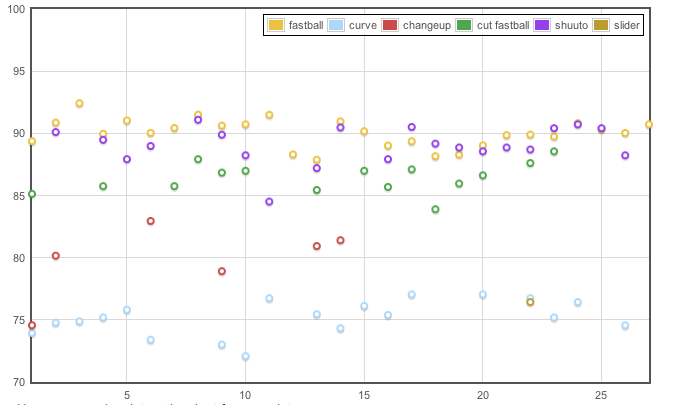 During his first year in Japan, Vogelsong started 20 games and posted fairly average strikeout and walk rates at 19% and 8% respectively. Now I don't follow Japanese baseball by any means, so those numbers could be more impressive than I am currently making them out to be. For that year his ERA was a less than impressive 4.13. The next two seasons didn't see a huge change in his numbers.

While it was nothing to write home about, Vogelsong's first season back in the majors was exceptional. He managed just over 2 fWAR, and posted similar strikeout and walk rates as he had in Japan. He ended the year with a 3.67 FIP. What were his most successful pitches? With PITCHf/x data we can find out. 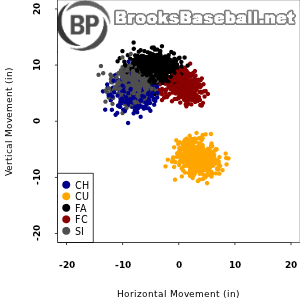 For the most part none of Vogelsong's pitches had any extraordinary movement. His curveball had slightly less horizontal movement than average, but it was arguably his most successful pitch. When using it he generated whiffs nearly 30% of the time, while also inducing groundballs on balls in play over half of the time. His sinker and change-up were also exceptional, as both pitches got groundballs over half the time on balls in play. His four seam fastball and cutter weren't quite as successful as his other pitches, but they got the job done. 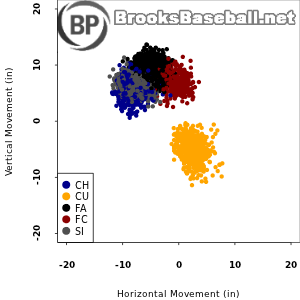 Movement-wise not much changed in terms of Vogelsong's pitches in 2012. Groundball rates for his individual pitches saw an overall decrease, with his curveball having the biggest gap. In 2012 he "only" induced groundballs 45% of the time, a 10% difference from 2011. This could be due to batters having a year's worth of information on him, or other factors. His sinker still remained effective, getting groundballs over half of the time.

One thing that is worth keeping an eye on is Vogelsong's loss in velocity. From 2011 to 2012 he saw some type of velocity loss on all of his pitches, with his sinker losing the most. It's hard to say how big of a problem it will be, but it is worth monitoring in 2013.

Vogelsong definitely had one an interesting career paths, but when given a second chance he took advantage of it. It will be interesting to see what other success stories pop up when pitchers go to Japan and return to the United States.

Data used in this analysis was taken from FanGraphs and Brooks Baseball.