Can Halladay Rebound in 2013? A Case Study Using Dan Haren, PITCHf/x, and FIP

Roy Halladay used to be the best pitcher in the National League. Lately, he's looked nothing like himself. What can PITCHf/x and advanced pitching stats tell us about how he's likely to perform in 2013?

Share All sharing options for: Can Halladay Rebound in 2013? A Case Study Using Dan Haren, PITCHf/x, and FIP

A major source of concern for Phillies fans heading into the season is whether Roy Halladay will be able to regain the form that made him the best pitcher in the National League in 2010 and 2011. His injury-shortened season last year was terribly below par by Doc’s standards, producing a 4.49 ERA that was his worst in his entire career in a season over 100 innings. His 2.1 BB/9 rate, while still above-average, was far above what he had posted the three years before, in which he had led his league in that stat each year. It was also the highest walk rate he posted in a full season since 2002.

Even worse, the 2013 spring has been nightmarish for Doc. He’s pitched 12 innings to replacement-level players and surrendered 9 runs on 13 hits—and most uncharacteristically, walked 7 hitters. Although PITCHf/x has not tracked Halladay this spring, reports indicate he is sitting at 87–88 mph with his fastball, several notches below where he was in 2011. He’s not throwing first pitch strikes, either.

There are a lot of statistics and PITCHf/x trends that point to poor performance by Halladay, but which of them really identify a problem, and which are red herrings?

For this part of the analysis, I’m going to look at Nationals starter Dan Haren for comparison. Haren has a nearly identical repertoire to Halladay, relies on pinpoint control for his success, is fairly close in age, and like Halladay suffered a back injury last year that brought his numbers out of his career norm.

Among the most recognizable trends that both Halladay and Haren—especially Haren—have had to deal with in the last few years is a decline in pitch speed. Halladay is on the left, Haren on the right, with the graphs comparing their year-by-year averages in pitch speed on their sinkers, cutters, and curveballs. 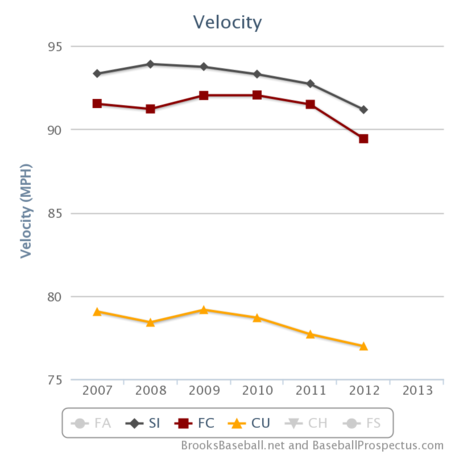 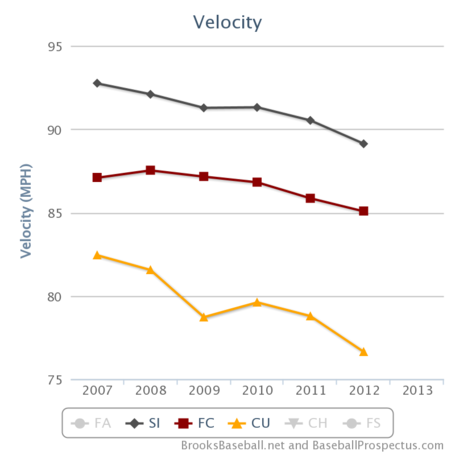 In Haren's case, a decline in velocity has not been a problem so far. He has dropped for several seasons and only saw his performance suffer last year. What's more, he was true to form during the season (3.55 ERA) except for five starts in which he was feeling back stiffness (9.69 ERA). (He went on the DL in July to rest his back.) During the five bad starts he had in June and July, his velocity on his sinker and cutter were not different at all—actually rising .3 mph above their regular-season averages.

Like Haren, Halladay has never really relied on "blowing the ball by" hitters as a pitcher (although his above-average speed in the past was definitely no hindrance to success). There's really no reason to believe that Halladay's performance would suffer dramatically because of a dip in speed, as one would expect to happen with a power closer like Craig Kimbrel. Halladay's K% last year, 20.4%, was still above his career average of 18.8%. Speed is not his problem.

In some ways, looking at fielding-independent pitching stats, other than Halladay's strikeouts, predict a fairly successful year ... and in other ways, not as much. Halladay's BABIP last year was .301, only a hair above the .298 he posted in 2011 (in which he had a 2.35 ERA). That would lead us to believe that hitters were not making significantly better contact against him than usual, that his inflated ERA was due to bad luck, and that is ERA should regress to a more Halladay-esque level this year.

On the other hand, there is strong countervailing evidence. Halladay's GB% (45%) was by a good margin the lowest of his career. His HR/FB% (12.0%) was also considerably above his career average (10.0%), meaning he was allowing fly balls more frequently and home runs as a percentage of fly balls. The end result was 1.0 HR/9—his highest since 2000! The fact that these trends occurred in tandem makes them especially worrying.

Doc's curveball and splitter lost considerable potency in 2012, especially when they were thrown in the strike zone. The batting average on his curve in the zone in '12 (.365) dwarfs what it was the year before (.145). The splitter had a smaller, but also noticeable jump (.231 to .317). His cutter and sinker did not experience big jumps.

The fact that these two pitch types were hit harder and more frequently without any major changes in pitch location (check for yourself) or spin deflection (check here), and because velocity should not explain these drastic changes, we're stuck with what is likely a non-statistical explanation.

What other explanations could there be?

This can't be proven here, but I could easily see a mechanical issue explain Halladay's increasing wildness on the one hand, and on the other the decreasing effectiveness of his off-speed pitches. Indeed, Halladay disclosed last month that his original injury was in his lower back—exactly like with Haren—and it was that injury that led him to alter his mechanics, which introduced the shoulder injury that placed him on the DL.

Halladay is almost learning to pitch again this spring, by his own admission. It may take more than just the next week to figure out how to be Doc again. If he struggles early in the season, it will be difficult to tell whether he's working out kinks or if he's gone full-blown Steve Blass on us. One thing I would not be very concerned about is what he's registering on the radar gun. Of much greater import is the smoothness and consistency of his mechanics, and whether he is able to use his off-speed pitches effectively.

I am grateful to MLB Advanced Media and Sportvision for PITCHf/x data used in the research of this post, as well as the manual pitch labels provided by Harry Pavlidis.