The Rise of the Called Strike

Called Strikes are on the rise over the last two decades, while swinging strikes have remained static. Is the new pitcher's era an empire built upon the Called Strike?

Share All sharing options for: The Rise of the Called Strike

I'd estimate a good 20 percent of the baseball-related writing I do here at Beyond the Box Score and elsewhere is essentially asking the question, How has "x" changed over the years? I especially enjoy writing these types of articles because I'm a fan of the history of the game, I have the resources to crunch the data, and I presume that you are similarly interested.

On other considerably less frequent occasions, I'll write a post that demonstrates, Why "x" has changed over the years. These posts are reserved for when I'm feeling bolder, assertive and almost combative, with an army of facts and figures to support a working theory to explain some brand of tremendously confounding baseball phenomona.

And yet, on other still rarer occasions, I'll write a post that asks, No, seriously, why has "x" changed over the years? I have no clue and it's driving me crazy.

This is one of those posts.

A few months ago I ran some data on an aspect of the game that we've probably all recognized over the years-- that major league at-bats are getting longer. I honestly don't remember if this made it into an article or not, so let me supply (or re-supply) you with that graph (click to enlarge): 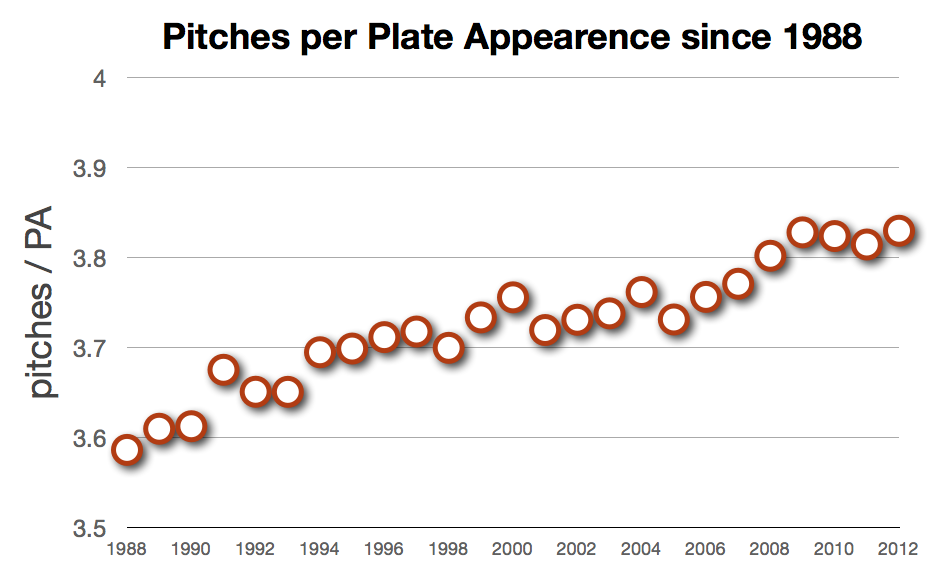 It's impossible not to notice that the three true outcomes are monopolizing baseball's at-bats as the game evolves, and that there is no sign that they have any intention of slowing down as we head deeper into the twenty-first century.

Of the three true outcomes, home run rates likely have the least effect on the length of a plate appearance (at least directly). And while walk rates surged during the heart of the steroid era, they have since returned to the same levels they were in the late 1980s, and yet the rise of pitches/PA continues.

Clearly, the rise in strikeout rates is the real concern.

One very prominent figure in the sabermetric community even went so far as to sound a call to arms against the strikeout, fearing nothing but disaster awaits our beloved pastime in the future.

When we talk about the amount of pitches per plate appearance rising over the past two decades, it occured to me yesterday to ask, what types of pitches are increasing?

Using the retrosheet files dating back to 1988 (when pitch count data first becomes prevalent), I found that the amount of Balls per plate appearance has remained relatively stable since 1988, but the amount of strikes per PA has risen considerably.

This shouldn't come as too much of a surprise-- walk rates in the majors have returned to normal, while strikeout rates continue to inflate exponentially. 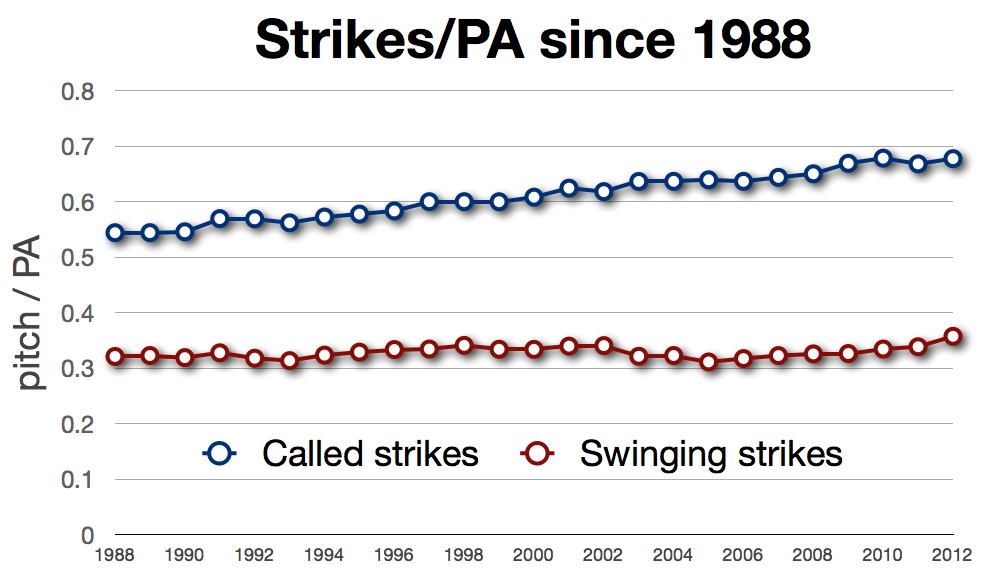 Now, it seems we have a variety of possible explanations for this. The first few that came to mind:

Certainly without pitchF/X we're relying on scattered video and personal accounts for verification of #2. But those of us who remember Glavine and Maddux in the 90's know that the outside edge of the strike zone seemed to extend out into infinity at times during that era.

Additionally, baseball's official strike zone was expanded in 1996 to include a few more inches in the lower part of the zone as well. In 2001, major league baseball attempted to expand the upper and inner portions of the strike zone as well, and even began evaluating umpiring habits with the new technologies offered by the QuesTech pitch tracking system.

Yet, despite these official attempts at restructuring the "rulebook" strike zone, certain pitchers like John Smoltz remain adamant that "there is no doubt the strike zone shrunk during my career."

What causes this disconnect between the data from retrosheet and Smoltz's account of the changes that may have occurred over the course of his career from 1988-2009?

Then, once you are done contemplating that, I'd like you to also explain the rise of foul ball strikes during that same period: 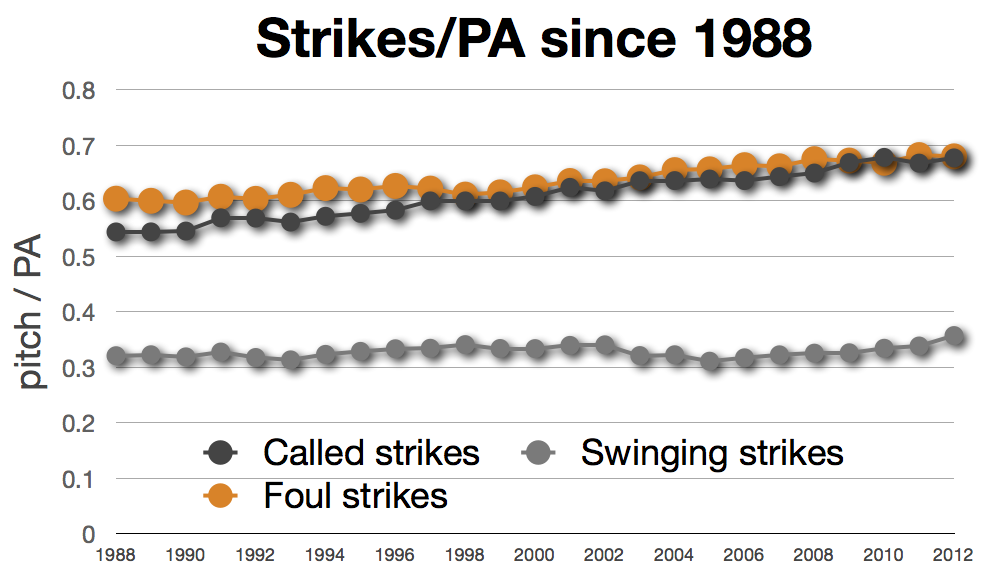 How do we explain this as well? Is it that pitchers are throwing harder and have nastier movement, and therefore batters are fouling off more pitches? And this in turn leads to more strikeouts? More strikes = more potential for strikeouts? Possibly.

But how does this coincide with the simultaneous rise of the Called Strike as well? Batters are so dumbfounded at the supreme velocity and cut of modern pitches that they just let them go by? Doubtful.

Or are batters these days simply "waiting their pitch" more often-- more willing to take a strike and foul off the 'pitcher's strikes' in hopes of catching a mistake later on in the at-bat?

Bill James reminds us in his piece that organizations over the last few years have flooded their ranks with hitters that are more willing to strike out because "hitters who strike out are generally just as effective as or more effective than hitters who don’t strike out." Is the rise in Called Strike and Foul strike percentages evidence of this trade-off between K-rates and power?

In other words, by taking and fouling off more pitcher's strikes, are batters as a result putting more hitter-friendly pitches in play?

My best guess at the moment is that the rise in strikeout rates has more to do with a change in hitter philosophy than we think. It is much more than simply some sort of uniform improvement in pitcher skill or approach.

Of course, all is not doom and gloom for the whiff fanatic. Even though the swing-and-miss strike has seen the least amount of growth among the strike types over the past twenty years, 2012 was still its best season yet. The .35 mark major league pitchers set this past season beats out the previous swing-and-miss peak of .33 established ten years ago in 2002. I'd also put good money on the possibility that this number continues to follow this trend in the future.

But that the Called Strike is the true kingmaker of baseball's recently emerged Pitcher's Era is news to me.

I'd love to know what you think about all this.

Thanks to Fangraphs, Baseball Heat Maps, and Retrosheet for data.