Which non-prospects turned into stars?

Which players went unranked in the top 100 but still had great careers?

Share All sharing options for: Which non-prospects turned into stars?

I am intrigued about the idea of a player coming from out of nowhere to contribute. They are the ultimate surprises. Sure, prospects have a very low success rate, but the guys that aren't expected to help are even less likely to succeed. It's also fun when a guy is written off by prospect experts and vindicates the crazy people who ask if Evan Gattis is the next Brian McCann (I'm not sure if anyone has asked this, I just made it up).

It would be great to run this analysis for players who were never even ranked on a top ten team list, but that data is not readily available (The lists are online, but adding ID numbers would be a huge pain). Instead, I'll just use Baseball America's (BA) top 100 lists which are much easier. It's mostly players like Mark Trumbo that I'll find. He was consistently ranked in the top 10 on BA's Angels list, but never made it to the top 100 of all prospects. He was not exactly a non-prospect, but his usefulness has been somewhat of a surprise. The power? Not a surprise. He was named the best power hitter in the Angels system every year from 2008 - 2010.

I looked at all players whose rookie season was 1990 or later - meaning they were eligible for a BA top 100 list - and then found their total career WAR through 2012. Andrew Ball (@Andrew_Ball) sacrificed a Friday night to help me find most of the organizational ranks.

I also included a look at how prospects who were ranked on the top 100 list fared in their careers. To do this, I found each prospect's best rank and summed the career fWAR for all prospects at that rank.

As usual, I split up hitters and pitchers for every part of the analysis.

Here is the list of offensive players who were never ranked in a BA top 100 list but are in the top 100 fWAR of all hitters to start their career since 1990:

Jim Edmonds was never ranked in the top 100 prospects by Baseball America and only ranked as high as ninth in the Angels organization. John Sickels did a career profile on him and includes this quote from the 1995 STATS Major League Scouting Notebook:

Edmonds can expect to see his playing time diminish. While he showed some signs of developing as a hitter, his role will probably be reduced to fourth outfielder. This more closely suits his abilities.

Fourth outfielder he was not.

Four of these 17 players (Kent, Giles, Cirillo, and Valentin) were not ranked on their organizational lists.

I would definitely like to see a retrospective on Kent, but JockBio has a long story on his career, including some notes about his minor league performance.

Sickels has a prospect retrospective on Brian Giles and says this:

Like his little brother Marcus, Brian Giles never excited scouts, even when he was putting up big numbers in the minors. He didn't have "great tools" or any plus attribute, except of course his bat, which is the most important tool of all.

Now we shift gears to prospects who were ranked in the top 100. On this graph, I included both a third-order polynomial trend line and a 5-slot moving average line. Again, this only includes the top rank in a player's career. 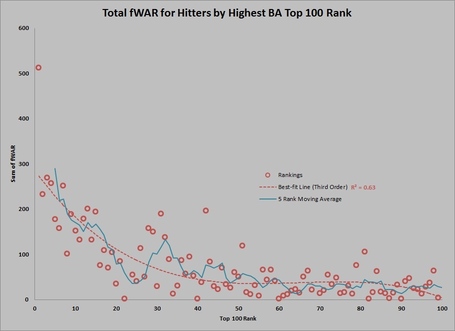 There is an odd dip in the early 20s. It might be randomness or something inherent in the way prospects are ranked. The bump at 42 is thanks mostly to Albert Pujols, Larry Walker, and Russell Martin. It's thanks less to Ryan Sweeney, Kevin Orie, A.J. Hinch, Choo Freeman, and Pedro Castellano.

Number one ranked hitting prospects are the best. They're fantastic! Here is the short list:

Ben Grieve and Delmon Young are the only busts that stick out. The rest either had good careers or are still promising youngsters.

These are the unranked pitchers who are in the top 100 fWAR of all pitchers to start their career since 1990.

The list of pitchers is much longer, including the second and ninth highest totals. 13 of the pitchers were not even ranked on their organizational lists. Alex Fernandez was drafted and lost his rookie eligibility in 1990 so was never eligible as a prospect.

Curt Schilling has the honor of being the best player (according to fWAR) to be eligible for a BA top 100 list, yet not be ranked on it. Take it away, Sickels:

...[H]is general reputation [by 1989] was as a guy with a very good arm who was underachieving a bit but still had time to turn things around.

Who knows if his career would have gone the same way, but I'm sure the Red Sox would have liked to keep him instead of Mike Boddicker. Or the Orioles instead of Glenn Davis. Or the Astros instead of Jason Grimsley. Boddicker and Davis had good careers, but Schilling still had a higher career fWAR than all three of those players combined.

Tim Hudson was only ranked as high as 10th in his organization, but has turned in a very solid career. This is what Sickels recalls:

Scouts [liked] his tenacity, but his fastball excited no one, he walked too many guys, and [he] wasn’t rated among the best prospects in the Southern League by Baseball America.

Kevin Millwood, who retired this offseason, is the best pitcher not to even appear on an organizational ranking. He doesn't have a full prospect retro, but he was named as an underrated prospect by Sickels. Here is his reasoning:

Component ratios were pretty good, but his ERA was somewhat high, and scouts complained about inconsistent command and occasional emotional immaturity on the mound.

Again I digress to bring you pitchers who were ranked in the top 100. 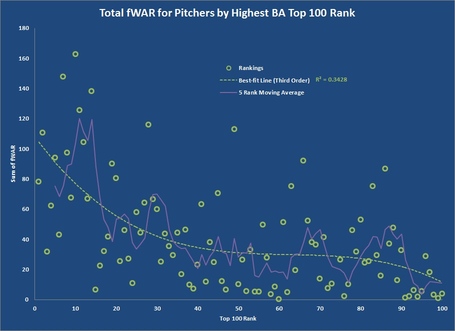 (Click to enlarge)
Number one pitching prospects don't even have the best careers; that distinction belongs to those ranked 10th. Pitchers who were ranked have a much lower correlation than hitters, although it looks like the top 20 does provide more contributions than normal. There is an almost repeating pattern about every 20 slots. The total fWAR shoots up to a peak (28, 49, 66, 86) and then drops back down again. I have no explanation for this.
Here are the pitchers that BA decided to put above everyone else:

Josh Beckett has done okay for himself, and Steve Avery had a few average years, but there is not much value here besides that. Most of Ankiel's value came after he switched to hitting, so he goes down as a busted pitcher as well. TINSTAAP, people. TINSTAAP.

Sometimes players bloom into stars before we even have time to react. Sometimes they show skills in the majors that were not evident at any point in the minors. It would be interesting to compare each of them to see what scouts missed and how they snuck under the radar. Schilling and Edmonds had better careers, but they were still on the prospect map. You heard it here first: Jeff Kent is the patron saint of non-prospects.