After making adjustments to his swing last August, Justin Smoak hit the cover off the ball in September and is on a tear this Spring. Many are wondering if we will see the once-fabled prospect come to life in 2013. I use Smoak's pitch data to analyze the flaws in his approach and to propose a few keys to success for him in 2013.

It’s kind of hard not to hear about the new Justin Smoak lately. He is a Spring Training All-Star, and he finished strong last season after retooling, revamping, reworking, rethinking, relearning, and redeveloping his swing. He is the kind of player that we are warned not to get too excited about, and yet we do anyway. When I saw how small his September sample sizes were, I tried not to get excited too.

A few articles have been written on the mechanical changes Smoak made, but let’s hear from Smoak himself (per Ryan Divish):

In this FanGraphs article, Jeff Sullivan suggests that most of the work done on Smoak's swing in August focused on the left side. This makes sense, given that in 2012 Smoak was a much worse hitter batting left-handed than as a righty. He struck out a lot more (23.9% as L, 14.9% as R), posted a lower wOBA, and hit lot more ground balls (1.10 G/F as L, .73 G/F as R). He did hit more line drives as a lefty, and a chunk of those line drives were hit in September. I’ll focus my analysis on Smoak’s approach on the left-hand side of the plate.

Smoak's batted ball profile is generally consistent with a player who has a long swing. It is pretty evident that he has been trying to pull the ball (see the spray charts below), and that he has been rolling over to the right side of the infield on many of those attempts. As you’ll see on the charts, Smoak hit all but one of his home runs off fastballs as a lefty to right field. When he started using a different bat after his "Tacoma Experience," we see that his profile isn’t much different. He still is rolling over to second base, and he’s also still only hitting for power to right field. If Smoak really has shortened his swing, we should see more of those green dots in left field in 2013.

Note: These spray charts (courtesy of Texas Leaguers) only display fastballs faced by Smoak as a lefty.

Let’s get a better idea of where exactly Smoak’s lefty swing has failed him. Below, I’ve put down two heat maps that plot fastball locations Smoak faced as a lefty (both are from the catcher’s perspective). The first one plots swinging strikes, and the second plots hits. Most of his hits against fastballs came on the middle to the outside edge of the plate. Smoak swung at fastballs off the outside corner of the plate, but he didn’t hit them. His "whiff zone" is essentially his "hit zone," shifted a few inches to the left. He also struggled with the low-and-in fastball, but we'll ignore that for now. 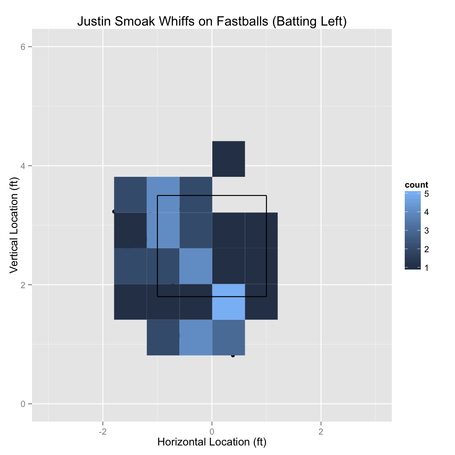 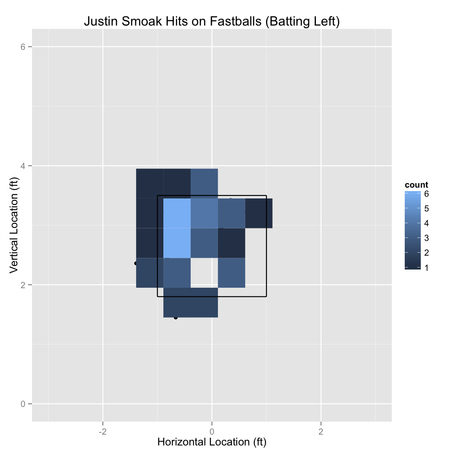 It is obvious that we are dealing with both a swing issue and pitch selection issue, but I wanted to highlight just how "long" Smoak’s swing truly is here. If Smoak is going to have a breakout season in 2013, his plate discipline is going to have to be much better. He doesn't swing and miss at pitches outside of the zone extremely often, but it seems like he does have difficulty identifying pitches in the zone. While we don’t have much of a sample size to work with on Smoak’s post-August swing, the pitches he didn’t swing at might be just as telling. 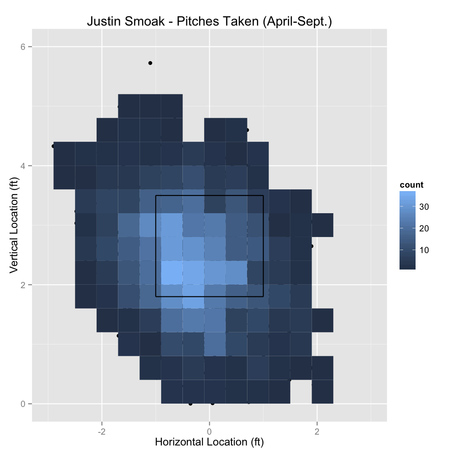 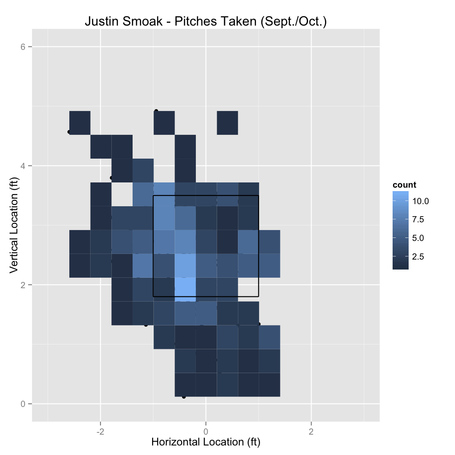 Check out the inner half of the plate. Let’s assume that Smoak is going to maintain his heavy pull tendencies in 2013 (given his similar batted ball splits above). Because it is extremely difficult to pull a pitch on the outside part of the plate, Smoak would be better off not swinging at these pitches at all. The second heat map suggests that Smoak might have figured out that he can be more successful if he focuses on swinging at pitches on the inner half of the plate. We're obviously looking at this in relative terms, and again we don't have a very large sample size to look at.

I am planning on doing more work on pitch selection and success dependent on batted ball profile, because it would be helpful to have solid evidence that "long swing" dead pull hitters have trouble with the outside fastball. I am not sure that I will find other big league hitters that have as much trouble with this pitch as Smoak does, though.

One last explanation for Smoak’s September numbers could have been the L/R distribution of his at bats. It turns out that his plate appearances from the right (around 38% of all PA) in September were pretty much in line with his season average (35% of all PA). It looks like Smoak did not have an inordinate amount of at bats from his better side in September, so we are still left questioning the new swing.

Smoak's September PITCHf/x data doesn't allow us to project better results for Smoak in 2013, but it does help us understand what we need to be looking for. One might argue that he could choose to jump on pitches on the inner half of the plate and avoid swinging at outside fastballs. It doesn't look like pitchers are going to throw anything near the inner half, though, at least until he proves he can go the other way with outside pitches. If he really has shortened his swing, Smoak should be able to hit to left field from the left-hand side of the plate in 2013. If he can't display this ability, I think we'll be looking at the same old Smoak. How many more ground balls to second base can Mariners fans handle?