Kimbrel vs Gagne and K%+

Share All sharing options for: Kimbrel vs Gagne and K%+

Before the 2013 season officially begins, I'd like to take one last opportunity to celebrate Craig Kimbrel's historic season out of the Atlanta Braves bullpen in 2012. Striking out half of all batters one faces is an amazing accomplishment that no pitcher had ever done prior to this past season (in at least 50 innings). Eric Gagne had set the previous record back in 2003, but Kimbrel had bested Gagne's rate by more than five percent.

Of course, it should be noted that Kimbrel and Gagne pitched in two entirely different eras, despite having just nine seasons elapsed between them. Alex Kienholz began to address this issue for Beyond the Box Score back in October, but what we really need in order to put strikeout rates in proper context is some sort of "plus" type metric which would appropriately account for the sharp increase in league strikeout rates in the past decade.

Bill Petti provided us the first glimpse of such a metric back in early July, but focused mainly on starters. So, before the 2013 season comes in and washes away the magic and awe of Kimbrel's season into the undertow of history, let's see how the right-hander's season holds up historically according to K%+ (minimum 50 IP):

Ideally, we'd like to compare each pitcher's strikeout rate to the league average, rather than the majors as a whole, considering the obvious advantages of facing pitchers as hitters. But for relievers that isn't necessarily an issue, since most pitchers have been replaced by the time a Kimbrel or Gagne reaches to the mound. So I've decided to leave that option up to you, and have included metrics with both baselines in the table.

Before we get to Kimbrel, however, let's first take a moment to appreciate that Bob Feller's 1936 season dethrones Dazzy Vance and all three seasons of his unimaginable stretch of dominance from 1924 to 1926. Petti's article went on at great length about Dazzy's achievements and states that "Vance appears more dominant in terms of strikeouts than any other pitcher."

This is undoubtedly true (especially considering he pitched over 300 innings in one of those epic seasons), but Feller's 1936 season ought to at least be a part of the conversation with a startling K%+ of 334 that year. What is nearly impossible to grasp is that 1936 was Feller's rookie season. But what is wholly impossible to grasp was that Bob Feller was just 17 years old in 1936. Yes, that's right, just 17 years old.

Gagne's famous 2003 season shows up as the fifth most strikeout-heavy season of the live ball era, once Dazzy Vance decides to stop hogging up all of the leaderboard.

After the Canadian, we find the recently retired Billy Wagner honored for his 1999 campaign for the Astros just before the turn of the century, and "nasty boy" Rob Dibble from 1992.

Only then, at eighth overall, do we find Kimbrel's 2012 season. This is still massively impressive-- the eight greatest strikeout season of all time is nothing to scoff at. But how many of you-- by a show of hands-- were disappointed that Kimbrel did not beat out Gange at least?

There is one other factor that ought to be considered when trying to adjust for strikeout rates and context however-- a pitcher's role.

Relievers are notorious for heading to the mound with the presumption that they only have three or four batters to face and that they can "give it their all" during that brief session of pitches. Plenty of studies have been done demonstrating that both strikeout rate and velocity significantly increase when a pitcher changes roles from starter to reliever.

Since 1980, reliever strikeout rates have become noticeably higher than their starting counterparts, and that gap may be widening even more still as the game evolves in the twenty-first century: 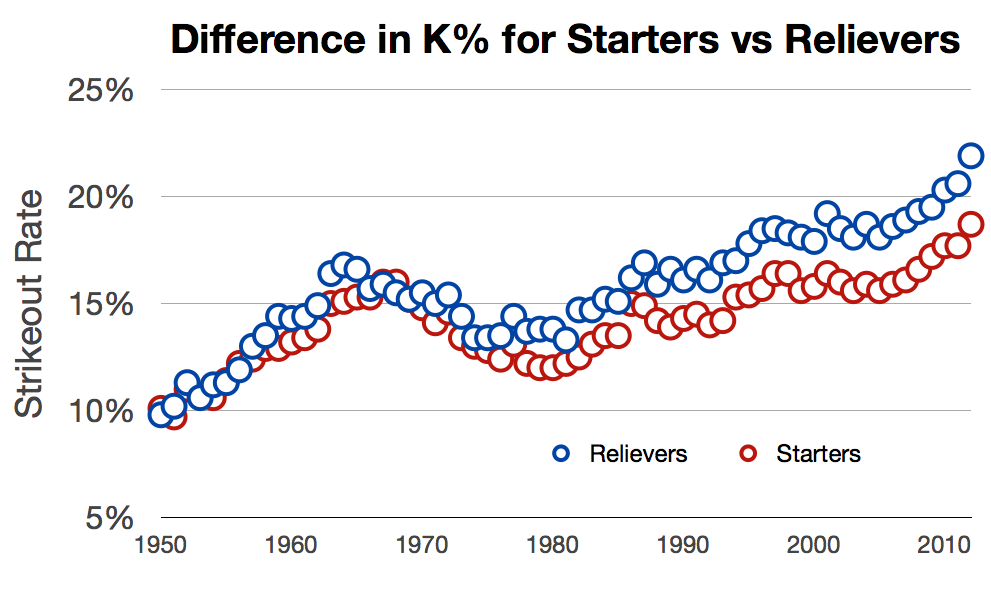 In 1981 relievers had an advantage of 1.1 percent over starters. In 2012 that difference was at 3.2 percent, and trends suggest that it should only continue to increase as the roles become further specialized in the future.

So, looking forward, shouldn't we then create separate averages for the two distinctly different roles?

If we look at the greatest K%+ rates of relievers compared only to the average strikeout rate of other relievers in that season, their numbers all take a significant hit.

Greatest Strikeout Seasons for relievers since 1950

The formerly elite K%+ rates from Gagne, Kimbrel, Hiller, Benitez, and Lidge would all fall below Lefty Grove's K%+ of 252 when we adjust for pitcher role. Grove's 1926 season, which placed as tenth best in the previous table, now jumps to the fifth best strikeout season of the live ball era. (Keeping in mind here that I don't have reliever/starter splits prior to 1950 on hand at the moment.)

Even still, a twenty-four year old pitcher posting the fourth greatest strikeout season for a reliever is supremely impressive and absolutely an historic event. Moreover, I do not believe it is too much of a stretch to imagine that Kimbrel could actually top his mind-blowing 50.2 K/PA in the near future, perhaps as early as this upcoming 2013 season.