When Do Prospects Break Out?

How long should you wait before considering a top prospect a bust?

Share All sharing options for: When Do Prospects Break Out?

A few years ago, I knew nothing about prospects, but once I joined a dynasty baseball league, that all changed. Now I have a fever and the only cure is more prospect research. I look at tons of top 100 lists and analyze them (coming soon!) endlessly. I'm also always looking for a leg up on the competition to figure out which prospects will fail and which will succeed. Last year at The Platoon Advantage, I did a wonderful study looking at minor league walk and strikeout rates and correlating them to major league success. This time around I want to answer a different question: When do you give up on a prospect?

This question arises from the career arc flat-line of Justin Smoak. I traded for him a couple of years ago, thinking I was getting a future stud to fill my first base void (and so did the Mariners). Rumor was at that point that he, in fact, did not put his pants on one leg at a time. In 2010, he was ranked the 13th overall prospect by Baseball America, 17th by Kevin Goldstein and 9th by Keith Law. In his rankings, Law called Smoak "an impact bat from both sides of the plate with a plus glove at first base." Nearly 1,500 Major League plate appearances and a total of 0.0 fWAR later, Smoak has not exactly met those lofty projections. Law talked on the ESPN Baseball Today podcast (RIP) that Smoak may have been injured for much of last year and that was impacting his swing. He absolutely performed better in the second half with a 0.326 wOBA versus a first-half 0.264 wOBA and by all accounts has looked good in spring training. I'm still holding out hope that he will have a break-out year, but how valid is that hope?

I have maintained a historical list of all of Baseball America's (BA) top 100 prospect rankings on my own, but now they have placed them in one convenient place for all to consume. BA has been ranking prospects since 1990 and is still the industry standard, though many other places provide great quality work. For each listed prospect, I found the first year and age (if ever) he achieved at least 2, 4 and 6 fWAR in his career. These values are the cutoffs for whether a player is a solid starter, all-star or MVP. I compared the year and the age at which they achieved this value to the last year they were ranked in a Baseball America list.

I split up hitting and pitching prospects because well, they're different. John Olerud and Frank Rodriguez were included on both lists because they were still considered as two-way prospects at the time (and boy, did their careers go differently).

There are a lot of tables, since I looked at two categories of career length (years after last prospect ranking and age) for three separate thresholds of fWAR. There are two sets of tables for each subcategory and two tables in each set, one for hitters and one for pitchers. The first two tables answer the question "What percent of prospects first reached this threshold in this specific year or age?". The second two answer the question "Of the prospects who reached this threshold in their career, what percentage reached it by this specific year or age?" The chart for each fWAR threshold shows the prospect's probability of achieving that value in his career based on the year or his age. 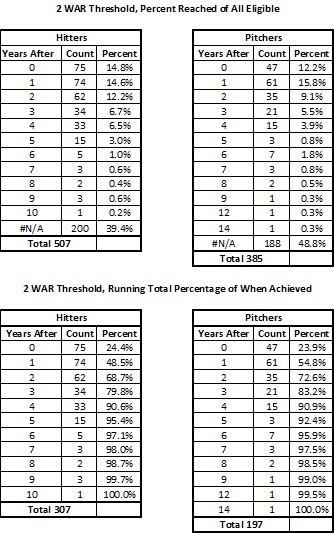 44% of prospects never achieve 2 fWAR in the Major Leagues, or 39% of hitters and 49% of pitchers. Of the hitters who do reach the 2 fWAR mark, 69% do so in their first two years. The hitter with the latest solid season was Ricky Gutierrez. After being ranked 82nd on the 1991 list, he slaved away as a replacement-level short-stop until 2001 when he busted out for 2.2 wins. After that, he returned to his previous performance, bounced around for a few years and was out of baseball by 2007.

For pitchers, the cliff is a tiny bit steeper. 73% of those who reach the 2 fWAR mark do so in their first two years and another 18% do so in years three and four. If a pitching prospect has not reached 2 fWAR through his fourth year, the probability drops all the way to 9%. Two pitchers really stand out in this area: Mike Timlin and Todd Jones. Timlin was ranked 69th on the 1991 list but never had a 2 fWAR season until 2005 when he was 39. He accumulated 14 fWAR in 18 seasons and retired in 2009. Jones was ranked 42nd in 1993 and had his first two win season in 2005 with the Marlins as a 37-year old.

This comparison looks slightly different because prospects reach the majors at different ages. It is most common for a hitting prospect to reach 2 fWAR when he is 24 or 25. For pitchers, those ages are 23 and 24. It is a common theme throughout this post that pitchers are a more known quantity about half a year younger than hitters.

This graph looks at the overall probability that a prospect will have a 2 fWAR season based on his career year number and age. 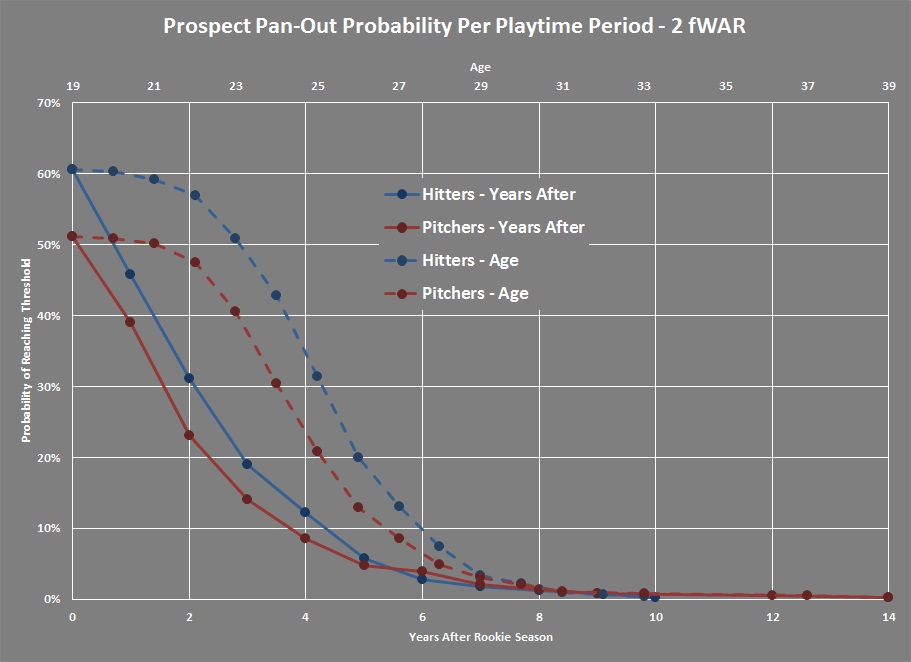 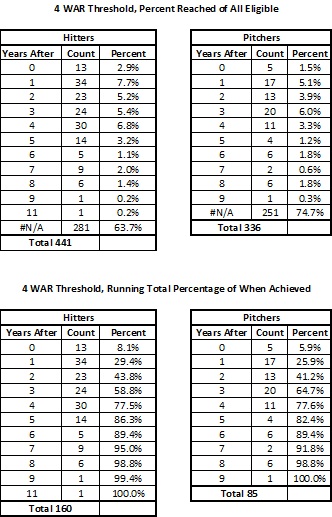 Only 32% of all prospects have at least one all-star season in their career (and I'm pretty sure that's the percentage of players that get invited to participate in the game every year). This season most likely happens one to four years into a player's career. The absolute late bloomers are J.T. Snow (11 years in) and Jake Westbrook (9 years). Westbrook's all-star season came just six full years into his career, but he was not ranked on a Baseball America list from 1998-2000 even though he was eligible. The five pitchers who reached all-star level performance in their first season are Kevin Tapani, Matt Morris, Kerry Wood, Roy Oswalt and Francisco Liriano. 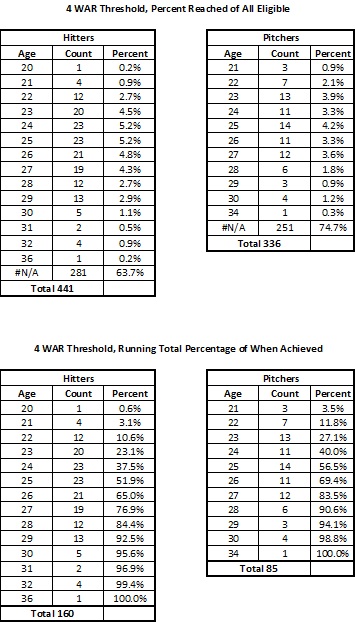 The most common first all-star season for a prospect occurs when he is between 23 and 27. Snow is the 36-year old hitter and Jose Contreras is the 34-year old pitcher. Contreras was a 31-year old rookie signed out of Cuba and was ranked 6th on the 2003 list. The youngest prospect (excluding 2007-2012 lists) to reach all-star level performance was Alex Rodriguez as a 20-year old. Wood, CC Sabathia, and Felix Hernandez were all 21-years old when they did so. 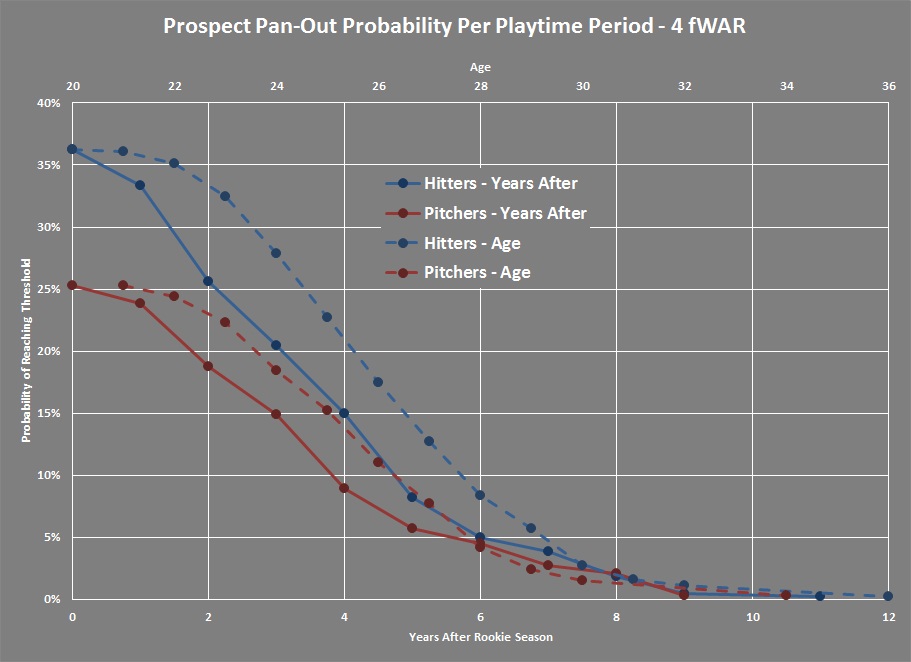 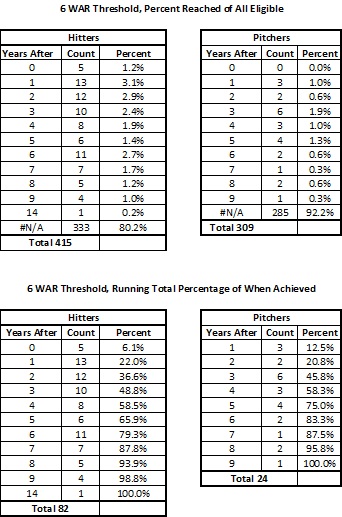 Only 20% of hitting prospects and 8% of pitching prospects ever have an MVP-level season and most players will have done so by their 7th year. It is important, though, to heed the warning of Aramis Ramirez. He was ranked 5th in 1998 but did not have his 6.5 fWAR beast of a season until nine years later in 2012. Mike Trout isn't included in this data because he was last ranked in 2012, but five other hitting prospects have had MVP-level rookie years: Kenny Lofton (6.3), Mike Piazza (7.6), Nomar Garciaparra (6.6), Ichiro Suzuki (6.1), and Albert Pujols(7.7). 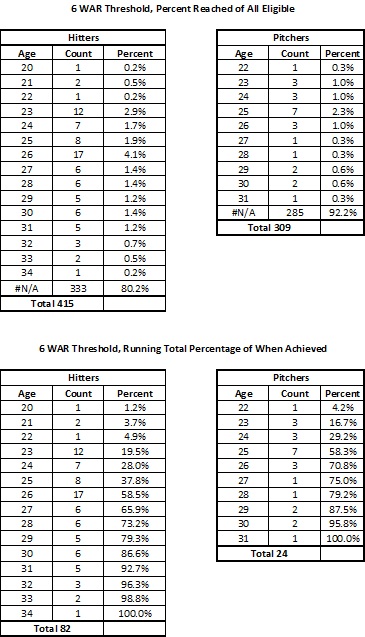 Pitchers who come in and do incredible right away tend to be slightly older than hitters, which makes common sense that they have refined their repertoire more in the minor leagues or have gone to college. However, it becomes apparent much more quickly than hitters if they will ever be great. 90% of hitters who will have an MVP-level season do so from age 20 to 30.5. For pitchers, that age range is 22 to 29.5. The youngest MVP-level pitcher was Mark Prior at 22-years old. 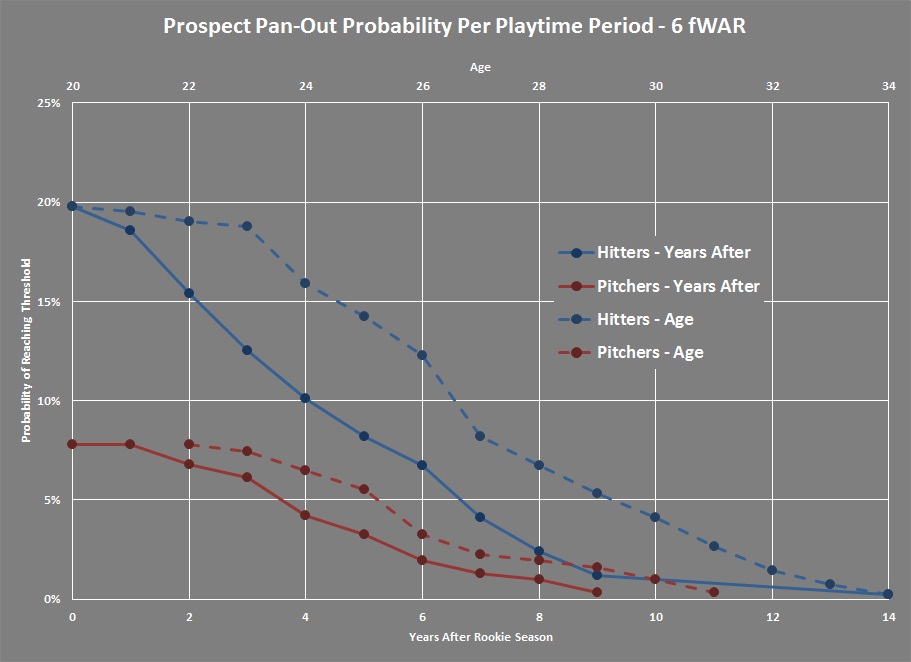 The overall MVP gap for hitters and pitchers is 12% and early on in a player's career, that is the difference in probability. However, in years three through six and ages 27-28, hitters are only 5.5% more likely to have their first 6 fWAR season.

You could read all of the preceding words (and you should, very carefully) or you could just look at this next chart that summarizes it all.

The third and fourth columns of each table represent the years after or age at which 90% of all prospects who will reach that threshold have done so. Basically, if it hasn't happened by that point, it probably never will.

So what does this mean for the Great Smoak Hope? We're halfway there. He was last ranked in 2010, meaning he is already two years past his final ranking. However, he still has a chance in years three and four to reach at least the 2 fWAR threshold. I'm hoping he's a late-bloomer, but his leash is shortening. If at the end of this season, you see white smoke rising from Safeco Field, you'll know you have a winner. If you see black smoke, call the fire department because the retractable roof gears may have ignited.