Can he drive 55? A PITCHf/x Approach to Projecting Aroldis Chapman's Fastball as a Starter

As the Reds prepare Chapman for the possibility of opening the season as a member of the starting rotation, we should all be wondering if the left-hander could learn to pace himself and remain effective. I broke down Chapman’s PITCHf/x data to try to get closer to answering this question, while also taking a look at the possible fragility of his arm at the end of this article. Since we don’t have any data on Chapman throwing anything more than 30-35 pitches on a given day, I tried to be creative in the way I looked at what we do have.

Share All sharing options for: Can he drive 55? A PITCHf/x Approach to Projecting Aroldis Chapman's Fastball as a Starter

[Editor's Note: Welcome Noah Woodward to Beyond the Box Score! Noah previously contributed at Fire Brand of the AL and will be using PITCHf/x data to provide analysis.]

On May 20th, according to a CityBeat article, Aroldis Chapman was pulled over for going 93 miles per hour on a small highway in Ohio. It was the sixth speeding ticket he received since acquiring his U.S. license, and the last before it was suspended. At this point I thought I would try to make a joke about how he might have trouble slowing things down. But I can’t think of a good one, and you get the point.

I took the approach of examining Chapman’s fastball for different batter-count situations. My thought process went something like this: If Chapman has displayed some sort of "get-me-over" fastball in the past, might we see that same fastball as a starter? And if we haven’t seen that sort of fastball, what reason do we have to believe that he can come up with it?

The easiest way to start looking at Chapman’s fastball is through differences in velocity. The chart below depicts fastball velocity depending on count, and I threw in Chapman’s 0-2 fastballs to help highlight the trend. We see some evidence that he is adding something extra when he has a hitter on the ropes, but there isn’t enough here to identify distinctly different fastballs. Chapman’s fastball recently topped out at 94 MPH during Spring Training this year, as he prepares for his new role.

Next, let’s look at Chapman’s release point in these different count situations. A lot of questions have been raised about changes on in Chapman’s release point (see Jason Collette at Baseball Prospectus and Dave Allen at Fangraphs). What I’m really trying to identify, though, are any differences between Chapman’s "put-away" fastball and his "get-me-over" fastball (that slow 97 MPH one). The graph below depicts these release points. PITCHf/x can be a little spotty in picking up release points, but we should be able to get a rough idea if we assume that these categories are equally distributed across parks he has pitched in. The most noticeable different on this graph is Chapman’s vertical release point. The significance of roughly a 2" in change is up for debate, and I’ll admit that it isn’t much relative to what I’ve seen with other pitchers. 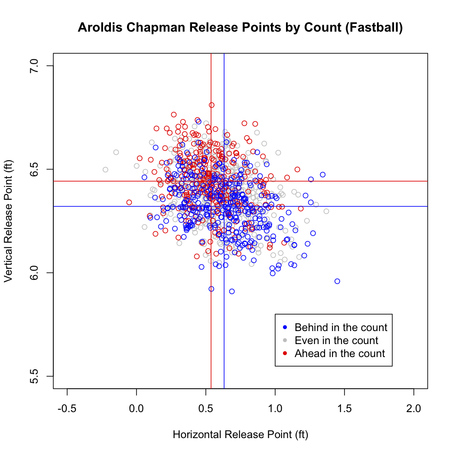 On a side note, I found some troubling information on variance in Chapman’s release point when he falls behind in the count. Compared to situations where Chapman is ahead in the count, variance in his horizontal release point is 35% greater than when he falls behind. I would argue that he is not an ideal candidate for a starting role solely based his control issues, especially if you throw in a pitch count ceiling. Chapman threw 4.36 pitches/PA in 2012 (according to ESPN), ranking him in the top ten among ALL pitchers, and I couldn’t find a qualified starter with a mark above 4.05.

Let's check out how much Chapman’s fastball moves (without the effect of gravity) depending on count. Again, the graph below shows about a 1" behind/ahead difference (on average). I also looked at 3-0 counts vs. 0-2 counts, and found relatively the same difference. Batted ball data confirms that Chapman is more hittable when he falls behind in the count. His HR/FB rates are highest when he is behind, and his FIP is extremely high. 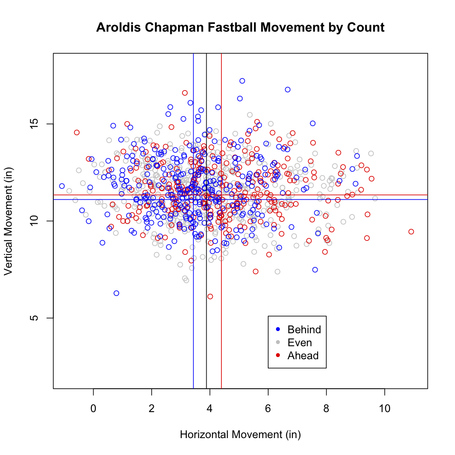 Finally, I wonder about Chapman’s current health and the vulnerability of his arm. Chapman dealt with some fatigue in September of last year. He experienced a noticeable decrease in velocity after throwing three days in a row two separate times in August and was sidelined for almost two weeks. How did Chapman fare after he came back, and what (if anything) do his post-fatigue appearances tell us about his ability to start?

Most who covered Chapman’s injury identify September 7th as the point of his unraveling. As you can see on the chart below, Chapman lost about 2 MPH on his average fastball during that appearance and his next appearance. It looks like he regained all of that lost velocity when he came back, and that the fatigue didn’t linger. I’ll pull up his release point and movement data to confirm this.

We’re dealing with a small sample size when we look at September 22nd-October for Chapman. The first graph shows less than an inch difference in vertical release point, and about an inch laterally. We really can’t glean much from this data. 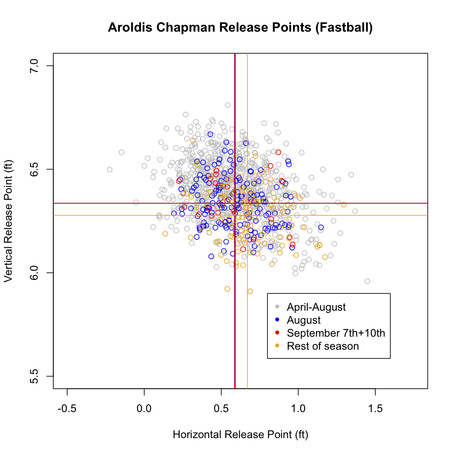 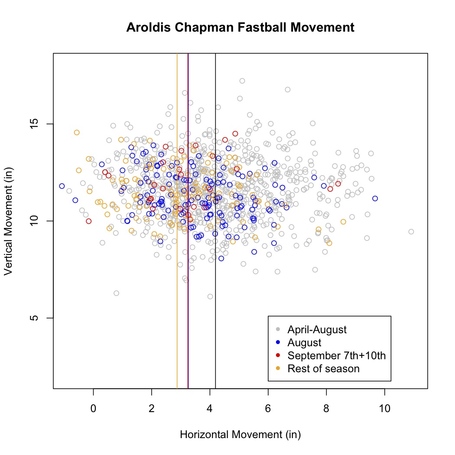 If we look at his fastball spin movement, though, we might see a clearer shift. From August-October, Chapman’s fastball moved a little over an inch less horizontally. I am pretty confident this difference is significant, because these also happen to be months in which Chapman posted his lowest K/9 ratios of his 2012 season (12.15 for August and 10.57 for September/October, from Fangraphs). This decline is concerning considering it came as he began to feel fatigued. We obviously would be pleased with any other pitcher for putting up these numbers, but keep in mind that everything is relative here.

All in all, I can’t find much in Chapman’s performance as a reliever that suggests he would make a smooth transition to a starting role. I’m going to project that his "fast-but-not-record-breaking" fastball that he will be forced into throwing as a starter will not be nearly as effective in getting whiffs as his current stuff, and that the Reds risk losing him if he tries to push the envelope. His ability to control his fastball will also really be put to the test as a starter, as will his ability to go deep into games. Dusty Baker should be careful what he wishes for.

Note: This piece is meant to complement and respond to Mike Mulvenna’s piece on March 10th here at BtB. Check it out here