The Baltimore Orioles went 29-9 in one-run games in 2012. That aint happening again.

Share All sharing options for: One-Run Game Performance is Unsustainable

Alright, Baltimore Orioles…let’s talk. You had a wonderful 2012 season, finishing 93-69 and earning a Wild Card berth. It was a heck of a year, the 67th largest win gain from one season to the next in MLB history, and one that really confused us all when we took time to look past the fun story and think logically about it.

I mean, 29-9 in one-run games? C’mon son. You can’t expect us to believe that happened any way other than dumb luck, right? There’s absolutely no chance that skill is repeatable, at least to that degree. This is common knowledge, and there’s no point trying to argue against it. But I will argue for it, anyway, because it's fun to quantify things.

How unsustainable is that 29-9 record in one-run games? Well, for starters, it’s the highest winning percentage in one-run games in MLB history (dating back to 1901, which is 2332 individual team seasons). Anything that extreme is due for some serious regression to the mean. But do records in one-run games regress to .500, or to some other team-specific level, similar to how we now know that hitter BABIP regresses to an established hitter mean?

To find out, I pulled all 2332 MLB seasons in B-Ref’s database and narrowed to records in one-run games. I wanted to look at three things: performance in the following year in one-run games, if elite one-run teams regressed less than merely "good" teams, and if teams only regressed to the level their Pythagorean win-rate would dictate. 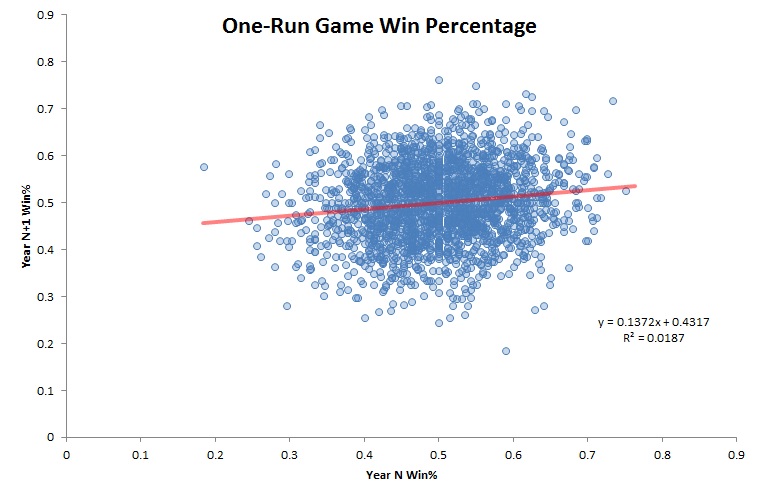 Anyway, no, it does not appear there is, in general, a relationship between success in one-run games year to year. But what if we get more specific with the set we’re looking at?

The logic behind this question is that teams who do other-worldly in one-run games may have some underlying skill or profile that allows them to do so, so they may not regress quite as far. The opposite logic might be that they have much further to fall in regression. 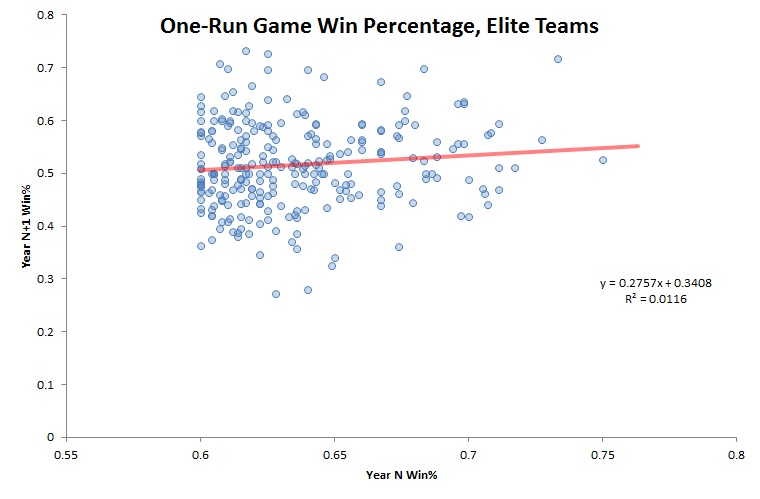 This graph just took teams who won better than 60% of their one-run games in one year, which is a sample of 267 teams, or roughly teams in the 89th percentile for one-run game performance. Please note the change in scale on the x-axis, as we’re only looking at elite teams.

We see basically the same thing as before – almost no relationship, with an R2 of just 1.2% and just as weak a trendline. It does not appear that even elite teams in one-run games show a particular skill that repeats year over year. To examine further, though, I looked at the average one-run game winning percentage for several buckets of performance levels. 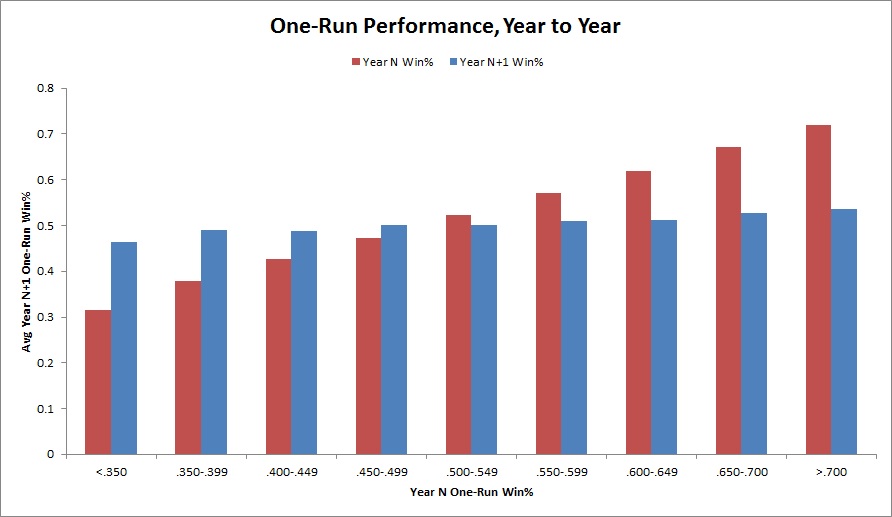 Once again, not a lot of surprise here. Every performance bucket moved closer to .500 in the following season. At the high end, we see that the elite one-run teams don’t regress all the way to .500, but this is mostly because these teams are better to begin with, leading us to our next sub-topic.

Here, we’re looking at the relationship between a team’s Pythagorean win percentage (a formulaic win percentage based on runs for and runs against rather than wins and losses) and its performance in one-run games. Since we know PythW% is a better predictor of future success than just wins and losses, perhaps it’s also a strong predictor of future performance in one run games.

The graph below plots Year N Pythagorean Win% against Year N+1 One-Run Game Win%. I realize this has the flaw of not taking into account roster changes, such as the fact that a team that blows a lot of close games may go out and acquire bullpen help, but it can give us an idea if this holds true. 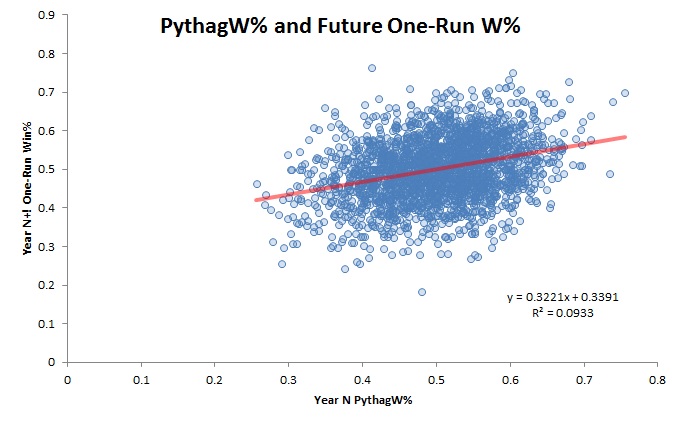 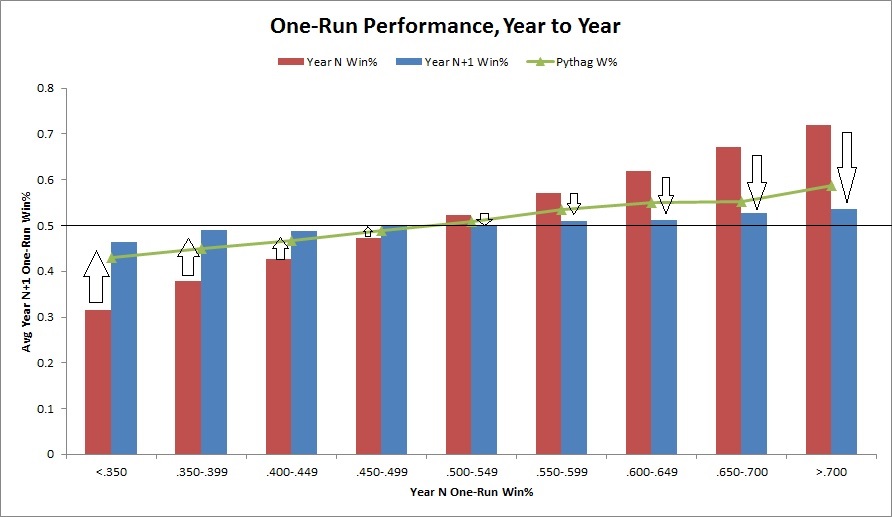 So What About the Orioles?

Well, bad news, Baltimore. Last year the team’s Pythagorean win percentage was just .505, meaning they were, as expected, playing well over their heads in close games. I’d definitely expect their performance to come back to somewhere near .500.

What About Bullpen or Manager?

The only things I could think of that may predict one-run game success is a very strong bullpen or an excellent tactician on the bench. The latter is impossible to measure, though I’d guess Buck Showalter falls somewhere short of "master strategist." As for the bullpen, well, I wasn’t going to pull reliever data for 2332 team seasons, but I DID pull it for the last three years (90 team seasons). Bullpen FIP had an 11.5% R2 with one-run game winning percentage, even stronger than the previous year’s Pythagorean winning percentage. It appears bullpen FIP, though not terribly predictive, is at least somewhat of a signal of one-run game capability. Unfortunately for the Orioles, their bullpen was merely average with a 3.68 FIP, so it doesn’t appear they have an edge there, either.

So, all of this is to confirm what we already knew – the Orioles, despite being a decent team with a decent bullpen last year, played WAY above their heads in one-run games. It’s not even remotely sustainable.