The Indians May Improve Their Pitching By Adding Defense

Cleveland's starting pitching was ranked near last in fWAR last year. In 2013, the Indians may improve their rotation by adding capable defenders to replace below-average gloves.

Share All sharing options for: The Indians May Improve Their Pitching By Adding Defense

The Cleveland Indians were extremely active this offseason following their brutal 68-94 record in 2012 where they ranked 29th in batting fWAR with 11.9 and 28th in starting pitching at 4.6. Needless to say, they had many areas in which they needed to improve to even resemble a competitive team in 2013. So the Indians traded one year of Shin-Soo Choo for Trevor Bauer, Drew Stubbs and a couple relievers then signed Nick Swisher, Michael Bourn, Mark Reynolds and Brett Myers. Not only that, but they inked Scott Kazmir, Jason Giambi, Matt Capps and Daisuke Matsuzaka to minor league deals. Overall, most of their signings were smart and have the potential to provide some good value quickly.

Obviously, there wasn't a revolutionary addition to the starting rotation. With their starters collectively posting an 8.7% walk rate and a meager 15.3% strikeout rate with a 4.73 FIP and cumulative 4.6 fWAR, Cleveland really can only improve from there. That being said, Bauer will probably start the season in Triple A and Brett Myers will be stretched out as a starter for the first time since 2011, where he posted a 4.26 FIP and a 1.5 fWAR. But the Indians have significantly improved their team defensively where they ranked 28th in defensive runs saved (DRS) at -51 and 30th with a -57 ultimate zone rating (UZR). Mike Petriello argues that the Tribe have upgraded their pitching by improving their defense ($).

Instead, the new-look Indians' defensive corps is in position to actually help their staff rather than hinder it, and that's in part simply due to addition by subtraction. Choo and Shelley Duncan were the two corner outfielders with the most playing time last season, and both were subpar defenders; Choo in particular rated as being especially poor (minus-17 UZR). If Antonetti had merely replaced them with average fielders, that would be an upgrade, but he has done much better than that -- the 2013 Indians are likely to be one of the only teams in baseball playing three center field quality defenders in their outfield. 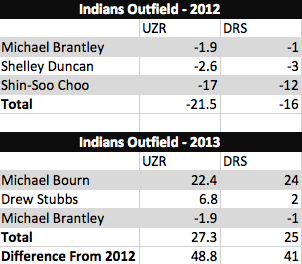 With three natural center fielders likely to be making the MLB roster, Michael Bourn will definitely be patrolling the position due to being the best defense outfielder in the majors in 2012 (22.4 UZR and 24 DRS) and his career 50.5 UZR/66 DRS. As a result, Michael Brantley and Drew Stubbs will be pushed to the corners. Regardless, they will be significant upgrades over their predecessors, Shin-Soo Choo and Shelley Duncan. Brantley posted a slightly below average -1.9 UZR/-1 DRS in center field through 2012 whereas Duncan struggled with a -2.6 UZR/-3 DRS over 404.2 innings in left. Trading Choo and his 2012 -17 UZR/-12 DRS and replacing his position with Stubbs, who registered a great 6.8 UZR and 2 DRS throughout 1107 innings in center field, will provide a noticeable improvement. With Stubbs and Brantley having less of an area to cover, it can reasonably be expected that they will post similar or even better ratings next year. Last year's outfield posted a collective -23.9 UZR/-16 DRS. Assuming Bourn, Stubbs and Brantley replicate their 2012 numbers; Cleveland will improve by 48.8 UZR/41 DRS.

Swisher provides defensive versatility at first base (.9 UZR/5 DRS in 2012) and right field (2.7 UZR) as well. As a result, the defense at first base from Casey Kotchman's below average glove (-2.9 UZR/-1 DRS) to Swisher will be an upgrade. Likely, Mark Reynolds and Jason Giambi will share duties at designated hitter, cancelling their defensive liabilities. Still, Asdrubal Cabrera and Lonnie Chisenhall must improve defensively if they are going to help their pitchers.

Petriello admits that defensive ratings are still a work in progress but UZR and DRS are still viable evaluations. The revised outfield trio of Bourn, Brantley and Stubbs as well as Swisher at first base will not cure the Indian's rotation woes singlehandedly. Defense doesn't improve below average strikeout and walk rates, but it could help improve the Indian's league worst 65.5% left on base (LOB%) and close the half run gap that's between their ERA and FIP.