Can We Predict Minor League Player Success in the Big Leagues?

If major league organizations could predict which player, or players, from their minor league system would succeed or fail in the big leagues based on various criteria then we would not only have far more legitimate Rookie of the Year candidates but each team would be substantially better overall. But what if there was a way to at least help make those predictions?

Share All sharing options for: Can We Predict Minor League Player Success in the Big Leagues?

Many fans of baseball understand that there is a difference between every single major league ballpark, sometimes a huge difference, and those differences impact how each individual player performs. One ballpark may be more conducive to putting up strong pitching numbers while other ballparks may be friendlier to the hitters.

The point I’m trying to make here is that we know there are differences in how players perform in the many different ballparks and that’s why metrics such as TAV (true average) and wRC+ (Weighted Runs Created Plus) were developed - so we could account for the ballpark factors and come to understand a players true performance and talent level in any given season.

Kevin Ebert from Baltimore Sports and Life wrote a piece detailing the minor league ballpark factors and the various run scoring environments across the different leagues in minor league ball. For the data that Kevin looked at and put together, this is what he found:

In the minor leagues, there are wildly different scoring environments between the different leagues and even between the individual parks in each league. Some leagues such as the Pacific Coast League are known for having extreme hitters parks, while leagues such as the Florida State League are known for being heavily slanted towards pitchers. But even within each league, the parks can vary greatly. 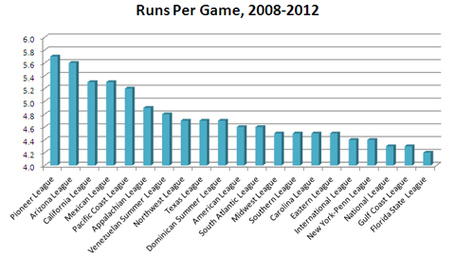 Since we know that certain leagues within the minor league system are more hitter friendly and some are more pitcher friendly we should then expect hitters to under-perform when called up to the majors, at least initially, relative to their PCL performance right?

But is there a way to (legitimately) account for the drop off in production going from hitter friendly leagues such as the PCL to the majors?

Adam Eaton tore up the PCL in 2012 by batting .381/.456/.539 with 46 doubles and 38 stolen bases and is now vying for a spot in the outfield and starting lineup with the Arizona Diamondbacks this spring. It’s reasonable to expect him to struggle just as much as Rizzo did when he first broke into the big leagues, right? The answer is an obvious yes but the question remains, by how much? In a 22-game audition with the team late last season he batted .259/.382/.412 but more impressively he had 14 walks to 15 strikeouts in 103 plate appearances (85 at-bats).

Knowing these things and being confident in the knowledge or predictors of various levels of production from the minor leagues and respective ball parks could do wonders for those players who often get overlooked because of a bad stat line that heavily favors the hitter or pitcher.

What would be the best way to go about figuring all of this out and have our findings viewed as relevant?