Using wSalary and the market trends examined previously, we will look at the best-valued and worst-valued contracts of the 2013 season, with emphasis on the first year of the contract (position players only).

In a previous post, I analyzed the market trends since 1996 and derived an evaluation model to map those trends. The outcome of that analysis: a model we will call wSalary. In that post you can see the best and worst deals of the 2012 seasons and the projected values of the 2013 season. Reading it may help with your understanding of this piece.

Now it is time to analyze which players in the 2013 offseason received deals in which they will provide value to their team for a good price or serve as a burden to the team's budget.

wSalary takes in the previous season's salary to account for the player's value in previous seasons, giving it some context into the player's body of work. It then uses regressed WAR totals multiplied by the predicted $/WAR (that $2.1 million number) for the 2013 season. All this yielded a r^2 of .76 with a p-score of 2e-16 as a significant predictor. This model was created with position players in mind. A model for pitchers would differ significantly.

Let's start with largest offseason deals given to position players:

Note: All WAR totals presented are from Fangraphs.

Verdict: This appears to be a great deal for the Tribe, right off the bat. However, keep in mind that speed players have the propensity to lose their speed skills in their early- to mid-30's. His wSalary is not too far off the AAV, but this deal is heavily back-loaded, something you never like to see for an aging speed-dependent player. As a result, it would not be a surprise to see Bourn lose his most valuable asset in the middle of this four-year deal. But for now and at least the next season, the Indians should be happy to see Bourn on their roster for the price they paid.

Verdict: As you can see, the projected salary is right there with Pagan's paycheck for 2013. I don't mind this deal at all. When you look at deals like Cody Ross and Shane Victorino, you can't hate this contract. Pagan was an integral part of the Giants' success in their championship season, and his BABIP looked normal in the context of his career season in 2010. The only thing that popped out in his numbers was his career high number of groundballs hit -- 217. That's around 40 above his career average. I do think this is a signal for some regression. His GB% has stayed the same in the previous two seasons, despite only one being a great campaign. If he is to keep up the GB% and the nice BABIP, the speed will have to remain the same. Even the slightest loss in speed could lead to regression for a guy who relied heavily on GB last season.

Verdict: The Red Sox paid market value for Victorino, surprising for a contract that at first had me shocked. He did not have a great year last year, but has been a well-rounded player his entire career. I feel like Victorino has what it takes to rebound on the offensive side. In 2012 his Batting on Fangraphs dropped from 24.0 to -1.5. Being a guy on the wrong side of 30, it is going to take a rebound on offense for Victorino to make up for his lost value as we expect the fielding to slowly wither as his speed goes with age.

Verdict: Once again, the formula is almost spot on with the actual salary for the next season. I like Hamilton -- especially when you get him at $17 million per year for the next two seasons, where you figure him to be the most productive. The back end of this deal does not look quite as good: $89 million for his age 34, 35 and 36 seasons. Surprising note: Hamilton's fielding took an apocalyptic dive last year from 3.4 Fld to -12.4 at FanGraphs. That might be a blip and is probably not an area of concern, but it should be noted that even a small improvement in his fielding would help his value significantly.

Verdict: This one has the Giants coming out on top for at least the 2013 season. Considering the market worth identified by the model, this is a very good deal for a guy instrumental in a playoff run. If nothing else this is an investment that can reassure the fanbase that they are bringing the team back for a repeat run. After all, the Cardinals were offering a two-year deal with a larger amount on a per year basis.

Verdict: Upon further review, it seems that the Indians did in fact get a good deal with Swisher. They are receiving Swisher's services under market value for at least the first season, which is great considering they also cheaply added Bourn. Since I tabbed Swisher a "marginal player" in the first installment of this series, I now feel stupid. Bill, you win, I surrender. The only comparable contract for Swisher this offseason was Cody Ross, who actually has never come close to Swisher's production. Swisher owns a career 120 wRC+ while Ross has put up a 106 wRC+. In the end, the Indians had a productively aggressive offseason with relatively smart deals for both Swisher and Bourn.

Verdict: This was the one deal of the offseason that caught me off guard. For one, Stephen Drew was coming of a season in which he posted a wRC+ of 79, albeit playing only a half season. But Drew has not played in a full season since 2010. Something like a $5-6 million one-year deal where Drew could reestablish his value makes much more sense. However, the Red Sox are basically pulling an Adrian Beltre on Drew, who signed a similar deal in 2010 for $9 million. But essentially the Sox are paying nearly market value for Drew. I think the idea is right, as there was a real need at shortstop for the Red Sox and they got a potentially pretty good one for a little more than expected. Especially considering there were multi-year offers with player options on the table.

Verdict: The "Greek God of Walks" saw his walk rate plummet to 10% and his K% rise to 21.2%. But that didn't stop the Yankees from investing $12 million in an effort to revive his career in a uniform once associated only with his enemy. According to our model, the Yankees basically paid market value for Youkilis. Having your wRC+ dip from 126 to 102 in a season's time usually does not equate to a big payday. But interestingly enough, Youkilis is making "only" $250,000 less than last season's salary despite such a horrendous campaign. Personally, I don't love the deal, but wSalary is telling us that the evaluation is not too far off market value.

Verdict: This one is a fantastic deal for the Braves. Locking up a talent like this at such an early age for a $15,000,000 AAV, sounds very attractive. The Braves basically locked Upton up for his entire prime at a reasonable price, considering Upton was initially demanding $100 million to the rights for his services. Considering the Braves heavy diet of lefty hitters, Upton adds versatility as a right-handed bat in the heart of that lineup. The wSalary seems to disagree with both the AAV and the 2013 salary, but after the 2013 season I expect the wSalary to be more in line near the $11-$13 million range.

Verdict: This is not a large overpay for a mostly-solid player. Ross is solid and an above-average starting outfielder at best. But that is exactly how the D-Backs are going to pay him to be in 2013, and they probably shouldn't expect him to be more. Prior to last season, Ross's career high in wRC+ was 106. But Cody Ross most certainty benefited from the "Green Monster," amassing 113 wRC+ in 2012. Take a gander at this: only three of the home runs he hit in Fenway would have been home runs in Chase Field. Factor in a few spacious pitchers' parks in the NL West, and Ross may be headed for a rough season. 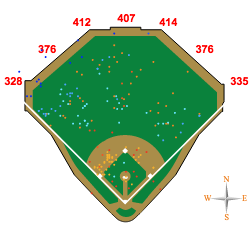 Verdict: This is another deal where the wSalary is not too far off from the AAV or the 2013 salary. LaRoche was an integral part of the Washington Nationals impressive 2012 campaign. It is a debate whether or not the Nats should have stuck with Morse, but any combination of Morse-Span, Span-LaRoche in that lineup provides more value and versatility over the LaRoche-Morse combo featured in 2012. LaRoche enjoyed a career year in 2012 with a high WAR at 3.8 and a 127 wRC+. Not to mention, LaRoche was a top 5 fielding first baseman and in the top 10 in wRC+, leaving him the fifth best first bagger by WAR.

What do you guys think? What are your first impressions of wSalary? I am thinking modifying the model to consider age in the equation.

Also, who do you think was the best signing of the offseason for free-agent position players?

All stats courtesy of Fangraphs and Baseball Reference.