Which active players are most likely to accumulate 3,000 career hits?

[Editor's Note: Welcome back to Beyond the Box Score, Chris St. John. Chris has previously written for Baseball Prospectus, The Platoon Advantage, and his own site, Steal of Home, as well as ... uh ... Beyond the Box Score. We're glad to have him back!]

(I won't argue if you call it a comeback).

In what has become a tradition of mine upon writing at a new place, my first post back will be about Nick Markakis. In fact, my last post here (excluding the All-True series) was about the Greek God of Meh. I want to update that final post and find the most likely active players to get 3,000 career hits.

Bill James created a formula called the favorite toy. I didn't know about it when originally creating the previous article, but that is basically what this exercise is.

I found the average age at which each of the current 3,000 hit club members retired which became the assumption of each active player's career length. Then I found how many plate appearances per season and how many hits per plate appearance each active player averaged in his career up to this point. Finally, I divided his calculated career PAs left (as PA per season times seasons left) by the amount of hits he is below 3,000 to obtain a likeliness of reaching the goal. 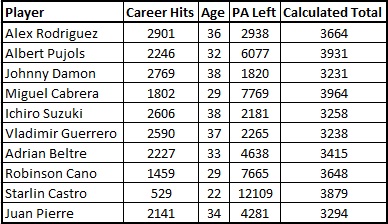 At the top of the list is A-Rod, who may reach the 3,000 plateau this year if his rehab from hip surgery goes well. Three of the players (Johnny Damon, Ichiro Suzuki, and Vladimir Guerrero) are nearing the end of their careers and can only reach 3,000 if they have a resurgence that matches their peak years. Albert Pujols, Adrian Beltre, and Juan Pierre have a chance if their decline is not too sharp. Miguel Cabrera and Robinson Cano are all still near their peak and have to hope for everything to continue perfectly. Starlin Castro is a surprise on this list at 22 years of age. He has started fast and is on pace (on pace!) for over 3,800 career hits.

It's nearly two years later and I did change my method, but many of the same names appear as last time. Of those missing, Derek Jeter already has 3,000 hits, Ivan Rodriguez and Edgar Renteria (unofficially) are retired, and Carl Crawford has struggled with injuries.

That's all well and good, but we're all here to know more about Nick Markakis. He missed nearly two months with injury last year, denting his reputation of durability. This spring, he has been out with neck spasms and acid reflux (probably from eating an especially spicy gyro). However, even factoring in his worst season to date, Markakis ranks 15th out of all active players and fifth out of all players under 30 (Cabrera, Cano, Castro, Ryan Braun) as the most likely 3,000 hit club member.

I appreciate everyone letting me return to writing with a fun post where I get to talk about my Baseball Boyfriend. I'm looking forward to sharing and learning some new things and starting some interesting conversations in the very near future.