The WAR Trend: Examining and Projecting the League Value on WAR

Examining the market trends by WAR and projecting future and current value based on these trends.

Share All sharing options for: The WAR Trend: Examining and Projecting the League Value on WAR

It is no secret, salaries in baseball are through the roof. 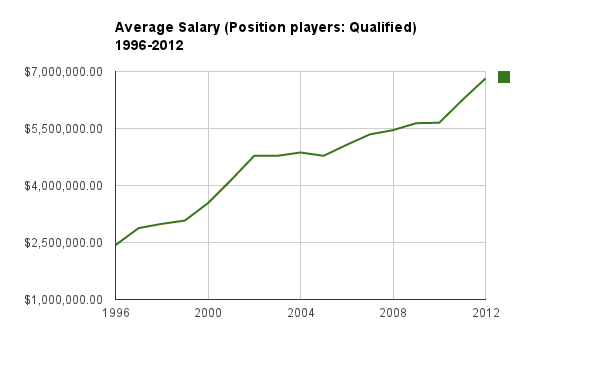 Inflation can not be the primary reason for this rise in this monetary gain for postion players. So why is this?

Over the last decade teams have become more conscious of the analytical aspect of valuing a player's worth. Of course, one of the stats that teams and stat-heads alike like to look at is WAR (wins above replacement player). While it is well known how much a player is worth on the open market, roughly 5.5 million per win above replacement, many players are providing value cheaply to their teams because of bargains or league-minimum to arbitration level contracts. As a result, not every team is paying 5.5 million per win, but rather less for each win.

Is the salary increase also attributed to the league increase in average WAR and thus leading to a higher average pay-out? In other words, has the talent level increase led to larger pay-days. See for yourselves: 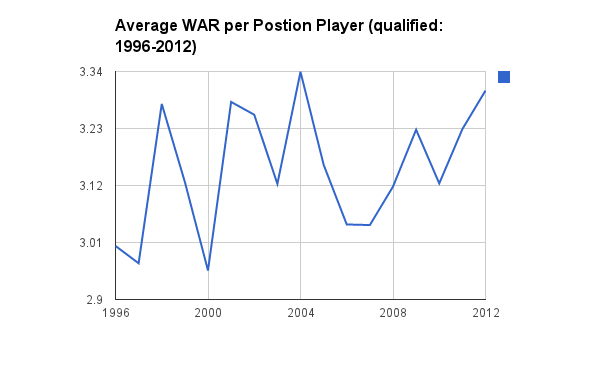 I can't be the only one curious to see if the reason for the upwards trend in salary has to do with the influx of cash in baseball or if the parity of talent across the league has led to the over-evaluation of otherwise average players. Or if in fact the league has become more top heavy and those star player's are being paid more, thus skewing the average salary of a starting postion player. Seen above the averages are on the rise, but this barely gives us a snapshot of the league as a whole.

Subsequently, we can't go on without assessing the total sum of WAR for qualified players in seasons 1996-2012, to evaluate if the talent level of hitters has trended upwards or downwards: 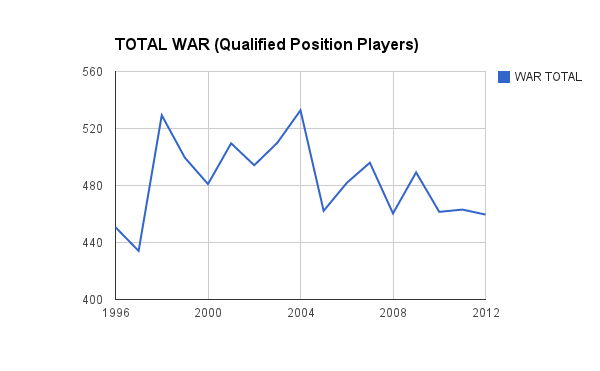 As you can see, the sum of WAR provided by starting position players has taken a hit in recent years. At 459.3 WAR that is a large decrease from what we saw even in 2004 when there was a total of 532.8 WAR. However, it seems as if the late 90's and early-mid 2000's were marked with largely top heavy production. The starters that we are paying nearly triple for are not producing at the same rate in which they were even three seasons ago.

Seen here in is the standard deviation of WAR in seasons 1996-2012. Recognize the one of the smallest standard deviations occurring in the last season perhaps indicating parity in the league amongst average players: 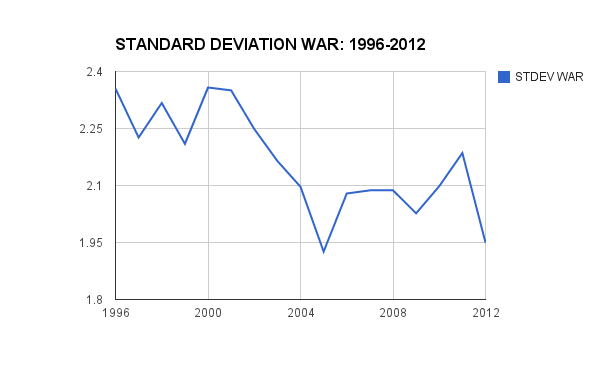 Despite these findings on the dwindling production of starting postion players, the dollar spent per WAR has gone up. This is no surprise. Given the large influx of cash due to lucrative TV deals and all-time high revenue sharing, the league's overall spending capacity is at a historical high. With the spending capacity of franchises being so high, perhaps clubs are giving out more money for the sake of excessive assets. In another succinct graph, I have put together the escalating $/per WAR for starting postion player's from 1996-2012: 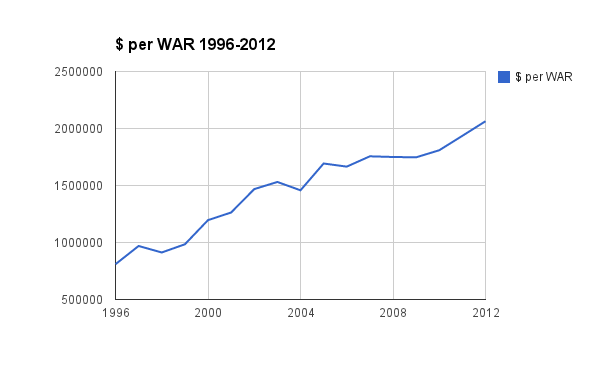 Given the increase in the dollars per WAR and the second lowest standard deviation for the data set, it may be reason to believe that the league is less top heavy now compared to earlier seasons in the late 90's and early to mid 2000's. Given the fluctuation in monies that teams have and the parity of the league, perhaps teams are spending more for top-tier talent, leaving the clubs that are left out with excess cash and a need to fulfill.

Take this offseason for example. A relative weak free agent class headed by Zack Grenkie and Josh Hamilton had some alarming contract shockers. For one, Zack Grenkie's contract was not cheap and is a large gamble to take for a guy who may or may not ever pitch to his peripherals. After Grenkie, we had rather marginal players receive outrageous contracts. For instance, just take a gander and check out Shane Victorino's 3 year 39 million dollar contract, or Nick Swisher's 4 year 56 million dollar special. These are in all honesty marginal players who benefited from the market trend of overpaying for dollar per WAR. In an offseason like 2012 it is apparent that teams are paying more now for the average player due to more cash circulation and the localized distribution of value centered near the average player, or 2-3 WAR. 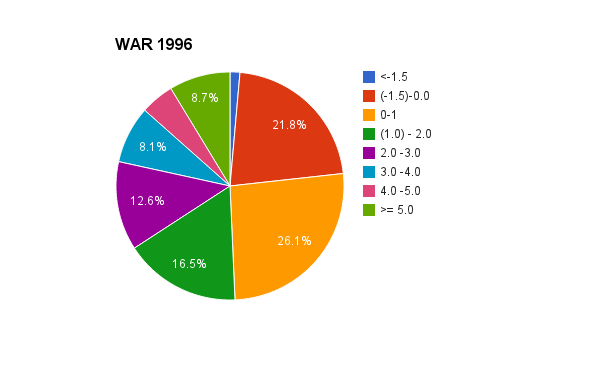 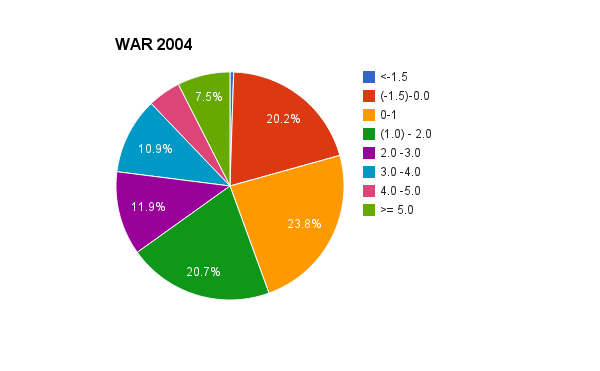 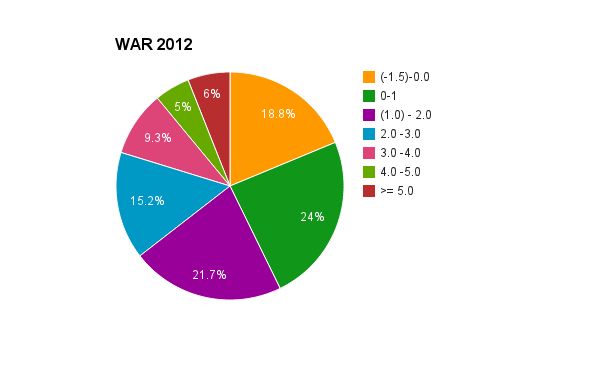 The distribution of WAR's all look very similar, yet you can see 2012 is the least top heavy only around 20% of the league providing 3.0-5.0+ WAR. Despite the positon player's relatively low production; the overall league, including those considered replacement players or worse, looks consistently the same with other seasons. Lastly, here is the overview chart with all the trends that we discussed above: 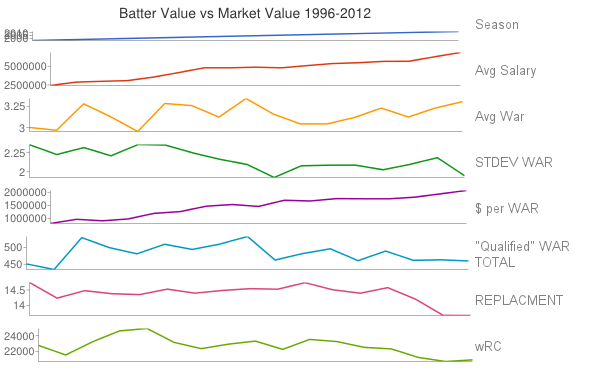 More importantly, the WAR trend can be described by the analytical movement throughout baseball. Hidden gems are no longer hidden because of the wide-spread use of WAR in evaluations. Teams have more ways of quantifying value of otherwise "no-name players", leading to their large pay-days when they hope to retain them. Martin Prado and Ben Zobrist come to mind as players that even a five years ago who would have not received the salaries they do today.

Using the market trends above we can evaluate what future money a player would make based on his WAR and previous salaries. Also we can evaluate the best and worst deals of the 2012 season based on the value per WAR.

This model returned an R^2 of 0.76 with the 2012 season and was a significant predictor of a future season's salary with a p-score of <2e-16. We will call our results wSALARY which is essentially the Value of the 2012 season.

Here are the best deals of 2012 based on the value of WAR on the market:

Here are the predictive 2013 wSalary's:

Special thanks to James Gentile for some awesome SQL help.