The Anatomy of a Whiff: Changeups

What characteristics of a changeup result in the most whiffs?

Share All sharing options for: The Anatomy of a Whiff: Changeups

A few weeks ago, I began a series of PITCHf/x analyses that revolved around finding the characteristics of each pitch type, which on average would result in more whiffs.

I began with the four-seam fastball and found that the vertical location of the fastball was the only real indicator of whether or not a batter would swing and miss at that pitch. This conclusion backed the commonly-accepted assumption of "High Heat".

Today, I would like to discuss another pitch, the changeup.

The changeup is one of (if not the) baseball's most interesting pitches. The changeup is meant to look like a fastball out of a pitcher's hand (similar release point and arm motion), but fools the batter by being much slower and having different movement than the fastball.

The changeup is dissimilar to the fastball in that it is a pitch that is more meant to induce a whiff by the batter than the fastball. Thus, this study could be even more fruitful than the one that I ran on four-seam fastballs.

Various predictors were tested using a nonlinear probit model to find which characteristics of a changeup, on a pitch-by-pitch basis increase the probability of the outcome being in a whiff (or in this case a 1).

Below I listed the predictors that were thrown out of the test, as they were not statistically significant (at a 90 percent confidence level) for greater than 25 percent of the sample:

Possibly unsurprisingly, the movement and velocity of the changeup did not come back as a significant predictor of whether or not a pitch was more likely to result in a whiff.

Surprisingly though, based on these results, neither the change in location or the velocity from the pitch before the changeup were significant predictors of the likelihood that a changeup would result in a whiff.

This result is, in many ways, counterintuitive.

I think it would be commonly expected among most people who watch baseball that a changeup would be most effective coming directly after a fastball, or when coming low in the zone after a pitch in up in the zone.

Yet for whatever reason, these results do not lend evidence to back that expectation. I will add though that it is very possible that this test is not sophisticated enough (as I only considered the pitch before) to understand the true effect that pitch sequencing has on the effectiveness (probability of a whiff) of changeups.

If the pitch prior to the changeup does not matter, then what factors do increase the probability of a changeup resulting in a whiff?

The predictors that I found to be significant for a great proportion of this sample were:

Below I listed the results for all 50 pitchers in the sample:

*-Indicates the predictor was significant at a 90 percent confidence level

The "r" component of these results can be interpreted similarly to correlation, although it is not exactly the same, as the probit model is nonlinear.

The vertical location of a changeup was statistically significant at the 95 percent confidence level for all but three of the pitchers in the sample. The relationship between vertical location and the probability of the whiff was also negative for all of these pitchers. This means that the lower in the zone a changeup is (relative to other changeups) the more likely it is that the changeup will result in a whiff.

The horizontal location of a changeup was statistically significant for much fewer pitchers in the sample (18 percent at 95 percent level and 28 percent at the 90 percent level). The relationship between horizontal location and the probability of the whiff was positive for these pitchers. This means that further away from the center of the zone a changeup is (relative to other changeups) the more likely it is that the changeup will result in a whiff.

These results may sound rather intuitive. It should not shock anyone who has watched baseball long enough to know that a changeup lower in the zone and away from the center of the plate is most likely better than the opposite, especially because changeups up in the zone tend to get crushed.

Although the results are not earth-shattering, I found strength of some of the relationships to be rather startling.

Those are very high increases in probability. I must note though that only pitches which a batter swung at were tested. Thus those percentages can only relate to changeups that we could reasonably assume a batter would swing at.

If Strasburg threw a changeup that landed five feet in front of home plate, well off of the plate, I would not expect the batter to swing at the pitch.

For fun and to further illustrate this point, I graphed every changeup that a batter swung at against Strasburg in 2012, enjoy: 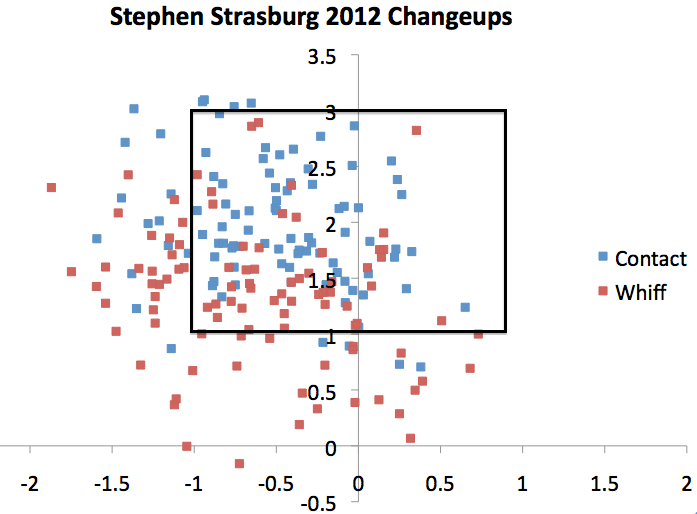