Introducing "Touch Score," a measure of how often a manager tinkers with his line-up via pinch-runners, pinch-hitters and reliever deployment.

Share All sharing options for: Joe Maddon: The AL's Most Active Manager

We all know that Joe Maddon is the master of all things baseball. He is a profit, a psychic and a mastermind.

Hyperbole aside, he is well known for being unconventional and using platoons and substitutions more than most. I was curious to see just how extreme he is in this regard relative to other managers, and I identified three areas I could look at to determine how "unique" Maddon’s management style really is in terms of being hands-on and strategic.

1) The number of pinch-hit and pinch-run appearances he uses.

2) The number of players that got regular playing time for him.

None of these are indicators of better strategic thinking, though I’m sure there would be logic behind each decision. Personally, I find the first two to be great and interesting and perfectly in line with The Extra 2% idea. The third I find to be incredibly annoying, because it means 18 times a year I have to watch Jays’ games with dragged-out late innings full of short reliever stints.

Messing around with Play Index, I searched for American League teams with streaks of games using at least 10 batters in a game last season. Basically, I was searching to see which teams consistently brought in at least one pinch-hitter in a game.

Here we see that Maddon was pretty damn consistent in using pinch hitters, with streaks of 26, 24 and 13 at different times during the year. The Rays had three of the AL’s 10 longest such streaks, dominating the leaderboard. Think about the 26- and 24-game streaks for a moment – basically for entire months at a time Maddon wouldn’t go a game with just his starting nine playing.

On the whole for the season, Maddon deployed 10-plus player batting line-ups more than any other team, narrowly edging Jim Leyland’s Tigers and doing so 57% more often than the Mariners. If I changed the filter to 11-plus batters in a game, the effect is even more pronounced. The Rays used 11 or more batters 78 times, 17 more times than the Yankees, who came in second, and nearly three times more often than the Royals, who bring up the rear with 26 instances. Finally, they used line-ups with 13 or more batters 30 times, nearly doubling the second-place Yankees, who had 16. The Royals didn’t do this a single time. 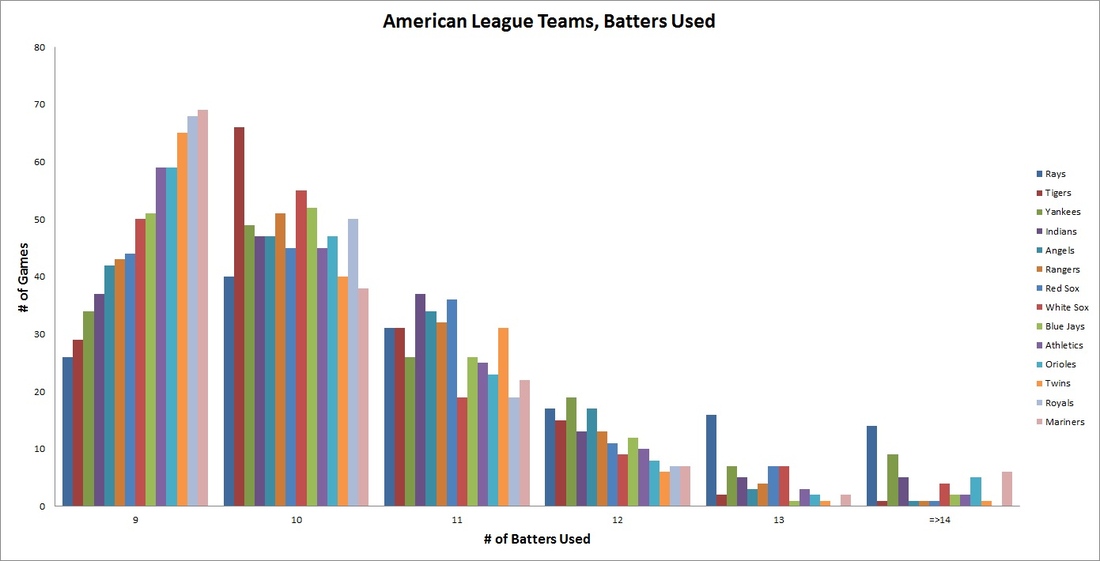 When we look at pinch-runners, Maddon isn’t quite as extreme. The Rays come in third with 33 instances, well behind the White Sox with 58 and the Twins with 38. In total, we see that the Rays had more pinch runners and pinch hitters than any other AL team by a pretty sizable margin over all teams outside of the Yankees.

So yes, Maddon utilizes substitutions more than any other manager in the American League. Again, we don’t know if this is "best," but it’s definitely the most active strategy.

To reiterate here, the idea is that the more players to get a fair amount of playing time, the more a manager utilizes platoons or situational deployments. This is probably our least telling area, though, since it could also mean a team is injury plagued.

Not much is telling here, since teams seem to use a relatively stable number of players for 200 or more plate appearances. The Athletics had 13 such players, most teams had 12, and the White Sox somehow had just nine. Even if we loosen it to 150 plate appearances, most teams used 13 or 14 players for that amount. Since we also don’t know if this is strategy or injury dependent, let’s just move on.

The first thing I thought to look at here was the number of times a pitcher was deployed to face just a single batter. Again, Maddon is among the most active, but the Yankees really dominate here.

A better way to look at this might be total innings per relief appearance. The number of relief appearances or innings aren’t telling, since both could just indicate poor starting pitching. If we use it in rate terms, we can see how often a normal relief pitcher for that team stays in the game. The Yankees and Rays are the only teams for which pitchers average less than an inning per relief appearance, remaining consistent with our findings on the hitter side.

I tried to find a way to sum the hitter side and batter side to give us an idea of how often a manager touches his line-up and bullpen. I took pinch hits plus pinch runs and divided it by innings per appearance to create TOUCH SCORE. This doesn’t TELL us anything at all, it’s just a means of gauging manager action.

Once again we see Maddon come out on top, followed closely by Joe Girardi. As we saw in the individual components, no other American League manager really touches Maddon and Girardi when it comes to actively tinkering with pinch hitters, pinch runners and quick reliever hooks.

I feel the need to repeat that this doesn’t mean a manager is better or worse, it’s just how active they are. You can look at Touch Score and compare it to a team’s record if you’d like and draw your own conclusions, but there could certainly be some reverse causality or multi-colinearity here. It also seems like the Yankees and Rays, two very talented teams, skew the entire data set (the R2 between Touch Score and Wins drops from .17 to .01 if we take them out of the sample).

Perhaps if people think "manager touches" is an interesting enough topic, I’ll pull the data across both leagues and for multiple seasons to see if there are any trends.

Until then, rest assured that Joe Maddon is always up to something.