Pitch F/X reports velocity, movement and release point information for every pitch thrown in a major league game. If the same pitch is thrown in Kansas City and Seattle, will the recorded pitch metrics be the same? We take a very basic look at park effects in Pitch F/X data from the 2012 season.

In my recent work looking at characteristics of pitchers leading up to Tommy John surgery, I arrived at a point where the next logical step was to investigate pitch release points. As no readily available leaderboard is available for these metrics as far as I know, I had to go exploring myself inside the Pitch F/X database.

Pitch F/X data became publicly available for the first time in 2007. Since that time, the system has been gradually improved. While this is fairly common knowledge, nothing drives the point home more than getting your hands dirty and working with the raw data. One of the first things that became apparent to me is that the pitch characteristics reported by Pitch F/X around the league have become much more consistent since its inception. Consider the average variance in release points for all pitches by year as an example: 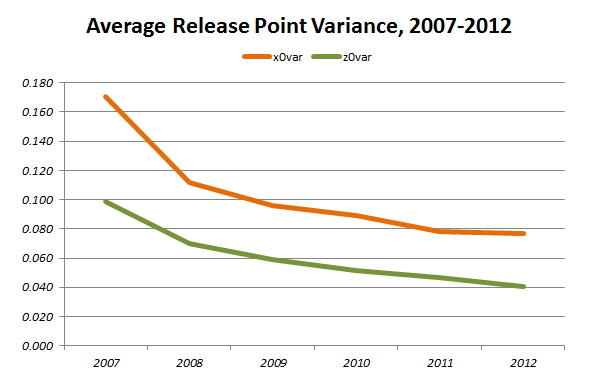 A similar trend can be seen in variance of pitch velocities. As it does not seem too plausible that pitchers as a group have dramatically developed more repeatable deliveries over the past five years, the tighter variance over time demonstrates an improvement in the consistency of the Pitch F/X setups from stadium to stadium.

Despite improving on an already technically amazingly accurate system, there still appear to be systematic effects introduced in the Pitch F/X systems depending on the home park. That said, what I will present today is one of the most basic approaches to looking at park effects, and other confounding factors will be contributing to the observed differences. I'll touch on at least some of these other factors toward the end of the article.

To get a quick handle on Pitch F/X park effects from 2012, I calculated the average velocity, horizontal movement, vertical movement, horizontal release point and vertical release point for all pitches thrown by both teams in all home games for team X, and the subtracted the same averages for all pitches thrown by both teams in all away games for team X. Normally we see park factors represented in a manner that would instead divide these two numbers (and multiply by 100), but in this case I'd like to keep the relative differences expressed in the same units in which they are calculated to make the numbers easier to picture in my mind (and hopefully in yours as well).

Admittedly this is a fairly crude method of determining potential park effects, but in my opinion the results are still interesting and worth noting. The tables below show the most extreme outliers around the league in each of these five categories, split by handedness of pitchers.

Certainly one confounding factor here is pitch types. The same number of four-seam fastballs and curveballs and changeups are not thrown in each park around the league, and hence differences here can lead to overall average velocities being higher or lower purely by design of the pitches thrown. I feel like the numbers that I've shown are an interesting starting point, and from here it is possible to look at whether certain types of pitches are thrown more or less often in certain ballparks. For example, do pitchers just stick with the fastball more often in large stadiums?

As a point of reference, I looked at only four-seam fastball velocities from 2012 rather than all pitches. Not surprisingly the results do change a little, most notably with the Toronto Blue Jays hitting the top 3 for both RHP and LHP in positive velocity deltas.

In occasions where a single team was the most extreme for both lefties and righties, we can looking at guys that threw the most innings to get a feel more the effect. Luke Hochevar posted a 93.15 average four-seam fastball velocity at home, compared to 92.26 on the road. Of course leave it to the incomparable Bruce Chen to be immune to environmental effects, as he managed almost identical 87.34 and 87.36 average four-seam fastball velocities home and away last year.

In looking back at previous years, I can see that some home parks appear to skew a particular measurement in one direction year after year. The velocities in Kansas City are one such example. The velocity readings in Pittsburgh are however not always offset to the negative like they were in 2012.

In terms of practical applications of knowing these effects, I can think of two interesting cases to watch in 2013. The first would be the case of James Shields, who will be shifting from a Tampa Bay home park that deflated four-seam fastball velocities of RHP by -0.16 MPH to a Kansas City park that inflated those types of pitches by 0.75 MPH. The second would be Francisco Liriano, who is leaving Chicago for Pittsburgh, transitioning from a stadium that increased four-seam fastball velocities of LHP by 0.28 MPH to one that decreased them by -1.02 MPH in 2012.

In analyzing their respective fastball velocities during the upcoming season, keeping this type of potential influence in mind would be prudent.

I'll repeat this here as well, since it will certainly play a part in creating these differences: this is for all pitches thrown, not controlled for pitch types. It certainly looks like there is a park effect in both Houston and Tampa Bay, and these can be seen in each of the last three seasons in these two locations.

Taking a closer look at Astros' innings pitched leader from 2012 as an example, Lucas Harrell saw much more positive horizontal movement at home on all pitch types save his four-seam fastball.

Here is another aspect to watch out for with James Shields in 2013, as he'll be leaving a park that has consistently inflated horizontal pitch movement to one that has typically deflated such readings.

The Dodgers had a clear positive delta in vertical pitch movement. Taking Clayton Kershaw as an example, he averaged 9.18 inches of vertical movement on his pitches in Los Angeles, but only 6.95 inches on average away from home. His use of pitches was quite consistent between home and away, swapping in a few extra curveballs and sliders at home at the expense of slightly less four-seam fastballs and changeups. If anything these pitch substitutions would have brought his average vertical movement down at home, suggesting that this offset is a true environmental effect in Los Angeles.

On the other end of the spectrum, the Mariners appear to have a strong negative offset in vertical movement. Looking at Felix Hernandez as an example, we see that he experienced an average vertical movement of -0.50 inches at home, compared to 2.95 on the road. In this case, a look at pitch type data shows that Hernandez went to his changeup noticeably less frequently at home. He also threw slightly fewer sliders, spreading the extras fairly equally across the rest of his pitch repertoire. I would expect that the net of this tradeoff would have led if anything to a higher vertical movement at home, so this lends some credence to the environmental effect in Seattle.

As for a player to watch in 2013 in this respect, consider Jason Vargas. Vargas pitched last season for the Mariners in a home park that had a -3.59 inch offset on vertical movement of four-seam fastballs for southpaws, and will spend this year in Los Angeles where the Angels' home park enhanced such vertical movement by 1.60 inches last season.

The release point tables are included for completeness, although I expect that these are the least interesting of the stats for most people. It is interesting though to note that the same teams appear as having the most extreme deltas for each pitcher handedness in both tables.

The method that I used to gauge park effects is a fairly simple one, that could be modified in different ways depending on the intent of the study. Multi-year averages would discriminate which effects are systematic in a particular park, and which sway around from year-to-year. Teams play unbalanced schedules, making their away game stadium set unique on top of not playing road games in their home park. Including pitch type information would remove a confounding factor, as was discussed throughout the article. By quickly examining deltas by pitch type, I noticed that nine of the top fifteen velocity deltas came on cutters. It is likely that cutters are still misclassified as other pitches and vice versa more than other pitch types.

It would make sense that other environmental factors such as temperature, humidity, elevation and wind could affect Pitch F/X numbers as well. It would appear that temperature, altitude and air pressure are accounted for in the reported velocities. Doing a quick linear regression on all four-seam fastball velocities and game temperatures showed virtually no correlation, which agrees with that statement.

Are you surprised that these offsets are as large as they are in the extreme cases? What other factors do you think could be contributing to these numbers?

Credit and thanks to Baseball Heat Maps for the Pitch F/X data upon which this analysis was based.