Deriving a formula based on the value of grit and analyzing the top 25 and bottom 25 grittiest players, while singling out the top scrappy teams in the game today. All to answer the question: does grit equate to wins?

Grit is a mostly qualitative trait that is, more or less, very hard to quantify. Yet it is interesting that a characteristic that may be the easiest for scouts to identify "right of the bat," could be a daunting task to quantify. Often it is used by those who oppose the use of sabermetrics to value a player; in fact, most often it is their strongest argument. "Well, who cares about WAR when my eyes tell me, he's got grit - he has the IT factor?"

But what exactly is a gritty baseball player? What exactly is true grit? When I think of grit in the context of baseball, I can’t help but think of a Placido Polanco, Marco Scutaro, and Ben Zobrist types. A player going out there, every single game that gives 100% without necessarily being the best player on the team -- but giving best effort. A guy who you can count on to do the little things, like putting down the bunt or making the pitcher work for every pitch. This kind of player is not going to hit 40 bombs or drive in 120 runs, but a gritty player is essential to any winning ball club. These are the guys you want hitting leadoff or in the 8th hole. While many of the aspects of a mentally scrappy ball player are qualitative, we can still try to quantify grit through baseball metrics that represent these traits and determine whether this metric correlates to value. Do the metrics we associate with grit provide value for that player overall. In other words, how much of a player's overall worth (WAR) is attributed to the value he provides through his "grit"?

I have summarized my idea of a gritty player to be as follows, with the correlating stat in parenthesis:

2) A player that can field his position. (Fld+Pos)

4) A player who has a high walk to strikeout ratio. (BB-K)

5) A player who has a good amount of sacrifice hits and flies. (SH+SF)

7) A player that sacrifice bunts + bunts for hits. (BU+BUH)

To quantify GRIT I took a population of 948 hitters with at least 350 at bats since 2009. I then weighted the above-listed stats by their correlation to WAR. This coefficient which would act as a weight on the differential of each stat and the league average total, to answer our question: Does "GRIT" equate to wins?

The formula derived is as follows:

With that being settled, let us check out the 2012 top 25 scrappiest players according to GRIT score. These players will be statistical representations of the grittiest player by our quantifiable means: 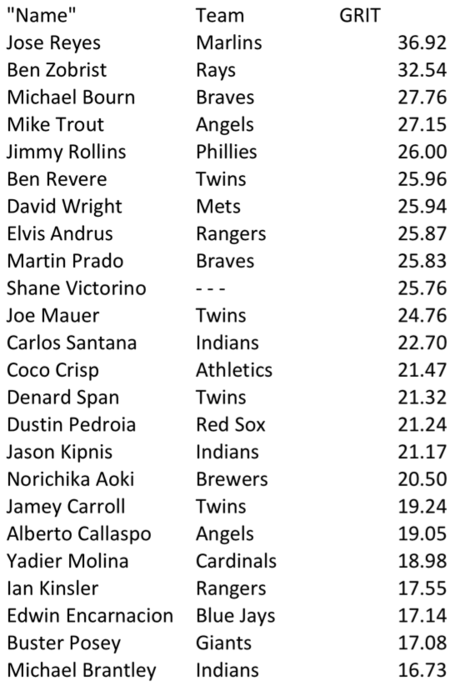 And the 25 least gritty players acceding by GRIT score: 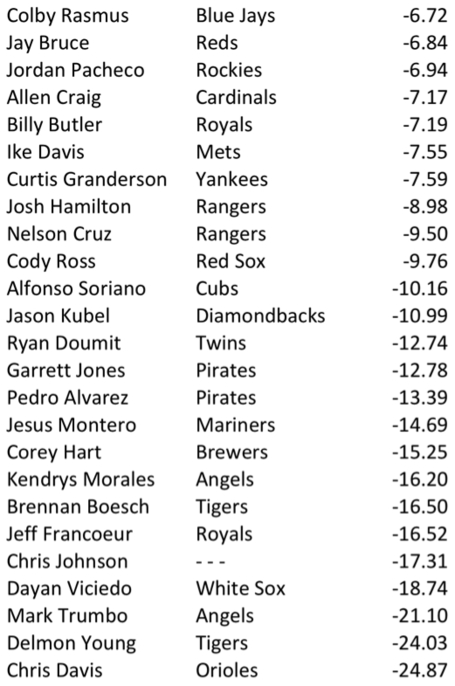 I am ecstatic to see that GRIT was able to capture the value of Prado, Aoki, Carroll, and Callaspo in the top 25. All four are true definitions of "gritty player" and much of their scrappiness was captured by quantifiable means. Also, prior to the conception of the GRIT score, I was worried the metric would favor speed players, however, seeing players like Posey, Molina, Mauer and Santana (all catchers) serve as examples of how this GRIT formula is able to include players who do not have favorable speed related metrics.

The bottom 25 does not feature many scrubs. Players like Mark Trumbo, Jay Bruce, and Josh Hamilton would be welcome additions to my favorite team and possess many gritty traits which are qualitative, however, when it comes to quantifiable GRIT, these are swing and miss guys who provide most of their value through slugging.

It is no surprise to see the Braves or Giants up top. Sadly, sorry Orioles fans, GRIT is not buying your fluke 2012 season either (but that is a discussion for another day). Please note that team GRIT is derived by a team’s accumulated totals in each of the respective GRIT categories in relation to league averages. In essence, the total grit score for a team is not the accumulated totals for all players on that roster but instead the team totals in each grit category. Also note that team clutch and speed were added for the team calculations as well.

And now for the final findings on our big question: Does GRIT = wins? For individual GRIT and its correlation to the player’s WAR, I have pegged the correlation of determination to be R^2 = 0.335. In doing so, I have determined that over one third of a player’s value in terms of WAR can be explained through GRIT, which is not terribly high but still statistically relevant.

Comprehensive team WAR and its correlation to GRIT is pegged closer to 40%, a R^2 = 0.373. In short, GRIT does not account for the majority of a team or player’s value but is nonetheless a factor to consider. A team like the Diamondbacks, whose prerogative this offseason was to acquire and accumulate a team of scrappy players, like Martin Prado and Tony Campana, while already boasting Gerardo Parra and Aaron Hill, are not necessarily wrong in doing so. However it is going to take a lot more than just the value a scrappy player bring to the table, to field a winning team. Look at the Twins who in ranked second in GRIT score in the majors and compiled only 66 wins, good for last place in the AL Central. Grit and wins do not go hand and hand, as I am sure the Twins and their fans learned the hard way in 2012. Take note Diamondbacks, I am talking to you!

There is great difficulty in establishing a metric for a characteristic that is considered highly qualitative. However, when approaching this from a pure metrics perspective, I am quite pleased to see the results from both the bottom 25 and top 25 as they capture exactly the players you would expect from either side of the spectrum. However, it should be considered to be a community project to find/create/arrange metrics that can be added to GRIT score, or omitted.

Feel free to add your insights so that we can improve our coverage of quantifiable GRIT!

*Revision to formula as per thoughtful suggestions from the community* 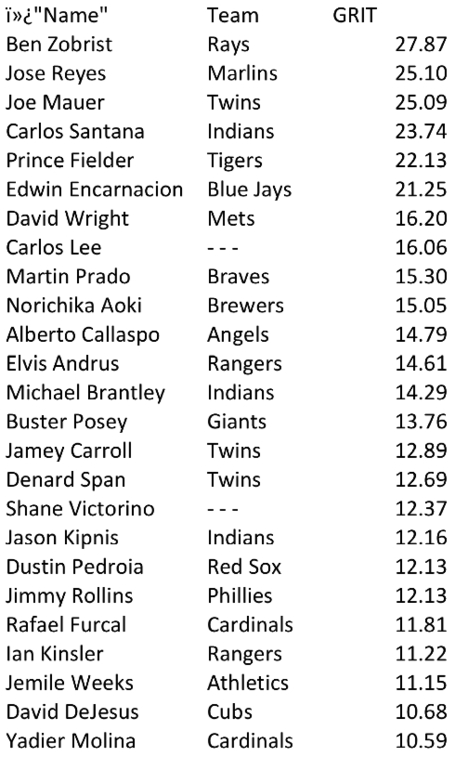