Maybe this happens to you. You're enjoying the ebb and flow of a baseball game on a summer afternoon. In the home third, Joey Grind takes two fastballs for strikes. Then he takes three sliders in the dirt, fouls off a couple of fastballs, and finally walks on the eighth pitch. As sure as night follows day, the announcers go crazy congratulating Grind on a great at bat. A little later, the same pitcher starts Mickey Hack with the same first-pitch fastball that he threw to Grind. Except Hack isn’t taking. Instead he pounds it 410 feet for a game-changing home run. Between sips of your beverage you're thinking: ``Wow, what a great at bat.'' But you will never hear those words in reaction to Hack's heroic deed. An industry insider, whom I deem reliable, recently confided that the Broadcaster’s Handbook stipulates that an at bat can only be described as great if it includes at least six pitches and two foul balls.

Given the modern obsession with pitch count, the idea of making a pitcher work seems admirable. After all, once the starting pitcher departs you get to feast on your opponent’s soft middle relief corp. In 2012, ML teams played only .450 baseball when their starter left with at least 100 pitches before recording an out in the 7th. Add in the twenty-first century realization of the importance of on-base percentage and the take-and-grind approach seems to make even more sense. The numbers support this point as well. Major league plate appearances that lasted at least six pitches last year yielded an OBP of .370 which was well above the ML average of .319. On top of all that, your local announcer will happily weigh in with the opinion, perhaps drawn from the aforementioned Handbook, that long at bats favor the batter because the more pitches a guy sees the more likely he is to square one up.

But there is an argument to be made for swinging early. Last year major league batters hit .330 and slugged .531 when they put one of the first two pitches in play. This is pretty good, of course, and the only hitter who exceeded a .330 batting average for the full season won the NL MVP. For pitches beyond the second, however, the possibility of the strikeout puts a significant damper on batting performance. And strikeouts are on the rise. For the 5th consecutive season, MLB set a new record for strikeout rate in 2012 with a mark of .198 K/PA which obliterated the .186 record set in 2011. This increasing tendency of batters to strike out raises the incentive for hitters to make something happen early in the count. If they don’t, they suffer the consequences. Major leaguers hit .260 and slugged .411 on pitch 3 and we see another big drop to .213 and .333 on pitch 4. Performance even gets a little worse for pitch 5 at .204 and .327.

One job of a hitting coach is to determine the appropriate level of aggressiveness for an offense on a given day. Each offense has its own personality and, in addition, a well-formulated game plan must account for a number of external variables. If you’re going up against Ubaldo Jimenez it will typically pay to be patient while against Cliff Lee trying to grind your way to walks is usually a losing proposition. If the other team has a weak bullpen you may want to try driving up the starter’s pitches. If the opposing starter has a wipeout slider, then you don’t want to risk falling behind in the count. There’s also a gamesmanship element. If you expect the opposing starter to attack the zone, then you want to come out swinging. If he expects you to come out swinging, then he’ll work more off the plate. There’s a reason they call it a game of adjustments.

We've seen that grinding and hacking each have their benefits. But what’s the best approach? It might seem like there’s too many variables in play to evaluate the tradeoffs. But let’s try something simple. The goal is to win games. To look for general trends, therefore, we can ask how a team’s win rate varies with the number of pitches that the opposing starter throws per batter. The figure below plots this data for two seasons. I selected last year as well as 2005 when the current streak of eight consecutive seasons of increasing K-rate began. In particular, the 2005 strikeout rate was .165 as compared to the record-breaking .198 in 2012. For reference, the league average for P/PA was 3.73 in 2005 and 3.82 in 2012. 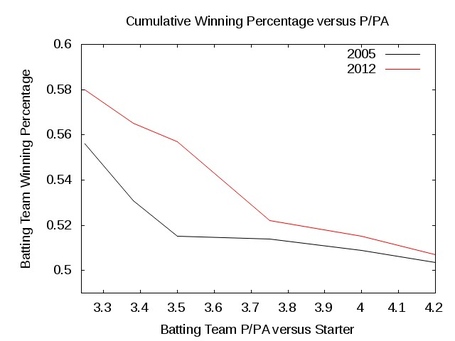 The red curve in the plot is the cumulative winning percentage for ML teams in 2012 as a function of opposing starter pitches per batter faced. For example, teams won at a .557 rate in games last year when the opposing starter threw fewer than 3.5 pitches per plate appearance. Note that the curve is monotonically decreasing which indicates that teams do better, on average, when their batters see fewer pitches per PA against the opposing starter. The black curve is the corresponding data for 2005 and shows the same decreasing trend. By comparing the two curves we also see that, as expected, completing a plate appearance with a small number of pitches leads to a higher win rate in a higher K-rate environment like we had in 2012. In summary, teams do better when they see fewer pitches per plate appearance and the benefit becomes more significant as the league strikeout rate goes up.

So what's the message? Should teams build a roster of free-swingers? Unfortunately, it's not quite that simple. Anyone reading this who can swing a piece of wood can enjoy a P/PA of 3 or less in the big leagues. But maybe, with the season approaching, we can be a little more patient when a batter flies out on the first pitch or a pitcher enters the 4th with a high pitch count. After all, great at bats aren't as great as people think.