The Dangers of the Hanging Change-up

Using PITCHf/x to determine how location of the change-up affects home run rates.

Share All sharing options for: The Dangers of the Hanging Change-up

In the comments of last Friday's examination of high heat and whiffs by Glenn DuPaul, one reader suggested that Change-ups which are left high in the zone "tend to get crushed." This is a rather common refrain we hear often in baseball broadcasts and it seems to make sense intuitively as well. An off-speed pitch with significantly less movement than a curveball hanging waist high seems like a nightmare scenario for the pitcher on the mound.

Former BTBSer Josh Smolow then demanded evidence for this assumption and it appeared none could be immediately offered. So it felt like as good a time as any for me to crack open my PITCHf/x database and give it a shot. I'll try to present the data in as simple, straight-forward manner as one can.

I took all change-ups thrown in 2012 and divided them into six simple zones a half a foot in length divided evenly at what is typically considered the center of the strike zone (ignoring batter height for the moment):

I then put each change-up that resulted in a home run into its proper bucket and compared it to all other change-ups thrown in each bucket. The home run rates for the two zones closest to the center of the strike zone, naturally, proved to be the most susceptible to the long ball. But change-ups left in the upper-middle zone were considerably more damaging than the lower-middle zone, however, resulting in a home run 1.8 percent of the time.

Of course, because we are dealing with just six inches difference between adjacent zones, batter height really ought to be considered. So I then ran the same query using the same zone criteria except using a center of the strike zone adjusted to the batter's height. These were the results:

A plurality of change-ups in 2012 crossed the plate in the very low zone at 34 percent. The low and lower-middle zone combined accounted for another 40 percent of all change-ups. Despite this, the spread of home run distribution across the strike zone remains relatively rather even. 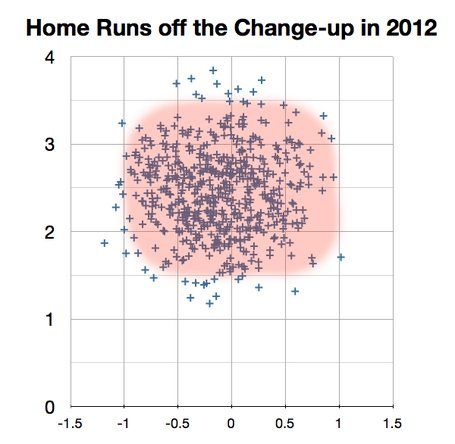 So nearly just as many home runs were hit off of 'hanging' change-ups as those that crossed the plate lower in zone in the 2012 season. But it's important to remember that hanging change-ups were hit for home runs at a substantially higher rate than change-ups lower in the zone.

The home run rates of 1.8 and 1.4 percent for change-ups crossing the plate in the two middle zones were also the highest amongst all pitch types. Sliders left down the middle weren't far behind at 1.3 percent followed closely by four-seam and split-fingered fast balls at 1.2 and 1.1 percent. I'm sure the home run rates of most pitch types fare worse as they rise in the zone, but it appears for the change-up this is especially true.

It is important to keep in mind that we are only measuring home run rates in these buckets, and not overall value of the change-up in these locations. Although I imagine a more comprehensive analysis using run values would still tell us pretty much the same thing-- keep the change-up down in the zone.

Special thanks to Jeff and Darrell Zimmerman for the PITCHf/x database made available at Baseball Heat Maps.