I attempt to see if F-strike% can give us more info, besides the fact that pitchers have high or low F-strike% numbers.

Share All sharing options for: Is throwing first pitch strikes a skill? (Part 1)

Lately I have been spending a lot of time with the FanGraphs leaderboards, Excel, and SQL Pro. I've been interested in F-strike% (first pitch strike percentage) and wanted to see if it was a repeatable skill or not. The project started off as fairly basic: I grabbed F-strike% numbers from all starting pitchers with at least 120 innings pitched in a season from 2002-2012. I then got the year n and year n+1 data and ran a linear regression. The linear regression returned an r^2 of .4075 and an r of .63, which lines up almost exactly with work that Bill Petti did.

I wasn't satisfied, however, so I decided to see how one year's F-strike% predicted the next year's BB%. The regression gave a r^2 = .32372, and r = -.56. I thought that since I was looking at one pitcher "skill", I would look at a few more pitcher "skills". However, I didn't have the data that I exactly wanted, so I moved on to another idea of mine.

I went into FanGraphs' custom leader boards and exported F-strike%, strikes, total pitches, and innings pitched. I divided strikes by total pitches to get strike percentage. I then imported the data into my database, and got all eligible pitchers who pitched greater than or equal to 120 innings in two consecutive years. My final number was n = 797.

I subtracted Strike% from F-Strike%, because I figured that the metric would show that throwing first pitch strikes is a skill, otherwise it would be possible that a certain pitcher just throws a lot of strikes in general. 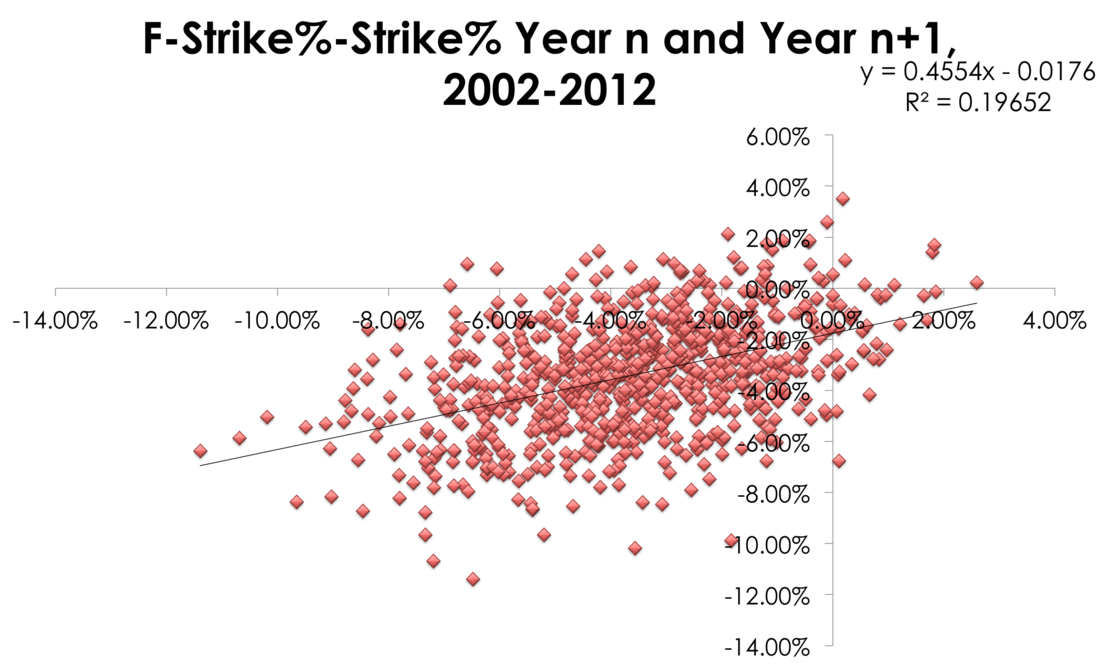 The r^2 tells us that only 19% of the variation of F-Strike%-Strike% in year n+1 can be explained by year n. This isn't that strong. The correlation coefficient was .44 though, so that means there is some type of positive relationship there.

On the other hand, these are the top five pitchers who had best positive F-Strike%-Strike%. Radke, Lohse and Mussina hardly walked anyone in their career. Lackey has walked batters slightly above average in his career though.

You'll notice that two of those pitchers are former Minnesota Twins pitchers. When I saw that, I began to wonder if there were more former Twins pitchers on the list. It's no secret that the Twins love pitchers who have good command, so I was interested to see what I'd find.

As it turns out, former Twins pitchers made up 11 of the top 100. 10 of those appeared on their list as a Twin, while Lohse appeared as a Cardinal. The Angels also had 10 pitchers on the top 100. Is it possible both of these teams know something that we don't? As I continue to look at F-Strike% hopefully I find out.

While the numbers that were returned were decent, I wanted to look at this on a league wide level, so I took the league average F-Strike%-Strike%, and ran that with the individual numbers. 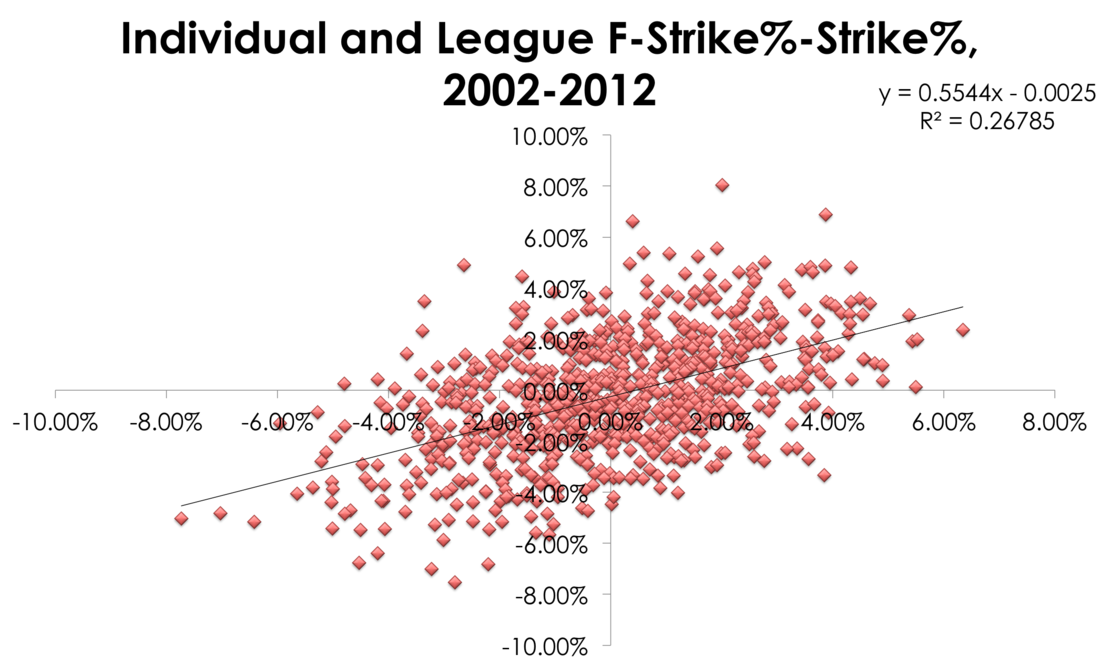 When I first started this project I was hoping to get a little more insight as to whether F-Strike% can tell us more about a pitcher. Turns I didn't find much at all really, which was admittedly a tad disappointing. I'm going to do a little more research though. Next I'm going to see if certain pitches can tell us why one pitcher has a higher f-strike%-strike% than other pitchers. Again, I'm not sure what I'll find but we'll found out together.

All info was taken from FanGraphs, and manipulated in SQL.