Scott Feldman signed a three year, $30 million deal ply his wares with the Houston Astros. Will his return to the state of Texas be a fruitful one for him and his new team?

Share All sharing options for: A Lone Star return for Scott Feldman

The Houston Astros are quietly making their mark on the 2013 offseason. Not long after the proverbial ink had dried on the deal that brought outfielder Dexter Fowler to Minute Maid Park, the team signed right hander Scott Feldman to a three year $30 million deal, giving them a steady innings-eating presence to the starting rotation.

Tall, with a low three quarter arm slot, Feldman features a heavy sinker as well as a sharp cutter that induces a number of ground ball outs, as his career 47.1% and 2013 49.6% ground ball rates confirm. He uses the sinker predominantly against right handed batters due to the arm side tail that bores down and in on righties. Feldman flashes his cutter the most against lefties, again to bore in on the hands. Along with his sinker/cutter combo, he also offers a curveball, using it as his primary secondary pitch: 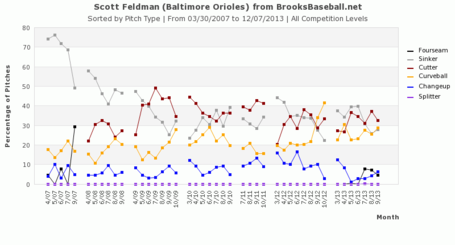 With these pitches, movement is the key to his success in the form of generating ground ball outs; velocity-wise, Feldman is firmly in the average range for both his sinker and cutter, sitting 90 MPH with the sinker and 87 MPH for the cutter, both showing some slight velocity declines: 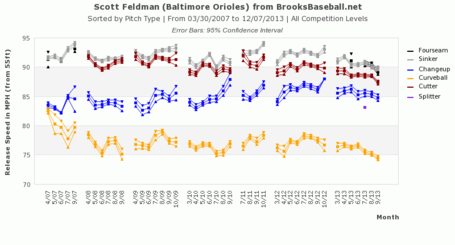 In terms of his career trajectory, Feldman's career started as a reliever with the Texas Rangers organization before becoming a full time starter in 2008. In 2011, Feldman sat out almost the entire season, pitching 32 innings over 11 games and two starts, due to knee surgery. In general, Feldman will provide around 180 innings of 2 win performance. Like many sinker ball pitchers, he does this by not out pitching his peripherals in that he accumulates few strikeouts and few walks.

Overall, we see Feldman's career trajectory as that of your standard issue sinker baller -- lots of ground balls and very little deviation from his peripheral stats and fewer home runs given up. With that, attention must be turned to the elephant in the room whenever we discuss sinker ballers -- team defense.

With more balls in play, the more a pitcher relies on his defense to help him get outs and suppress runs. Let's take a look at the rates of the two teams Feldman played for in 2013 and Houston for a trio of defensive metrics -- Ultimate Zone Rating per 150, Defensive Runs Saved, and Revised Zone Rating. The table below provides the value and how each team ranked overall for each metric:

While the 2014 Opening Day lineup for each team isn't etched in stone quite, Houston's starting nine is still up in the air more so than the other teams presented, so the values should be taken with a grain of salt. However, the premise still stands -- Feldman's 2014 stands to show some regression compared to his 2013, simply due to the possibility that the team behind him won't be as defensively adept as those in Chicago and Baltimore. That being said, third baseman Matt Dominguez and catch Jason Castro show some prowess with the glove that, combined with manager Bo Porter's propensity to utilize defensive shifts, might defray some of this potential drop in productivity. Castro's continued maturity in his game calling will also have the potential to maintain Feldman's 2013 output into 2014 and beyond.

Overall, this signing is a good one for a team looking for a no-frills starter who will remain durable and productive the entire course of a deal. With this rough estimate of Feldman's projected value and the idea that free agents are priced at about $7 million per win, the contract is a good one for the Astros, not only in terms of dollars, but also length of contract, since they appear to be avoiding any drastic drops in production related to aging. While this deal for Feldman, and even the trade for Fowler, will not reverberate through the league in any grand fashion, these moves show a savvy awareness that doesn't match Houston's current situation, but bodes well for them in the future.