While the Yankees were busy losing out on Cano and revamping their outfield, one of their recent stalwarts moved across town.

Friday would have been a red-letter day in Major League Baseball if Tuesday hadn't tested our preconceptions about the number of transactions possible during a 24-hour period. Robinson Cano's massive deal was the headlining move, but plenty of other players found new homes on the first Friday in December. Curtis Granderson was one such player, although he won't have to move any of his furniture because his new team plays fewer than 11 miles away from Yankee Stadium.

Granderson was an interesting free agent heading into the offseason because he was a clear step below the top market players like Ellsbury and Choo, but also a clear upgrade in at least one outfield spot for almost every team. Granderson wasn't the best option, but he was a really good option for many teams and he wasn't going to cost anywhere near $100 million.

Granderson is entering his age-33 season, but the nature of his decline phase isn't exactly clear. He missed more than 100 games in 2013 with injuries largely caused by getting hit by pitches, which one can't really hold against him. Before that, he had been worth more than 2.0 fWAR in each of his seven seasons with a couple of borderline MVP-type seasons mixed in. Granderson has bounced between good to excellent on the bases and played a mean center field early in his career before his numbers started to slide after his move to New York. It's probably safe to say the Mets are getting a solid but declining baserunner and a player very capable of handling one of the corner outfield spots. He probably can't play a quality center field anymore, but thanks to Juan Lagares, that shouldn't be necessary.

The central question regarding Granderson is how he'll hit during his four-year, $60 million deal with the Mets. If we price the cost of a win on the free agent market somewhere between $5 and $7 million, he needs to provide 9.0 to 12.0 WAR over the course of the deal for it to be a solid value. The Mets are hoping that he averages three wins per season, but anything over two should be good enough.

Let's figure his defense will be strong enough to wipe out the negative positional value, plus add a couple of runs for the first two years, and then slowly declines so that it's right in line with the positional adjustment for the latter two. If he's also worth a couple of runs on the bases with a slow decline, we're talking about one to two wins from that part of his game over four seasons. If we figure he stays healthy, his replacement level runs will take him up right near nine total wins if he plays perfectly average offense across the life of the deal.

So the question remains: what kind of hitter is he going to be? Let's check out his yearly wRC+:

First, we really don't have any reason to think Granderson is injury prone because the only season in which he missed significant time was the most recent one in which he suffered two broken bones due to high velocity objects being hurled towards his body. Granderson has been up and down in his career, but he's consistently been average to above-average at the plate.

He's lost some value as his batting average has fallen, but he's coming off six straight seasons of a walk rate above 10%. If you buy into 2013 as broken finger blip, the power remains a big asset. There is a red flag on Granderson, though, and it's the key to everything. Strikeouts. 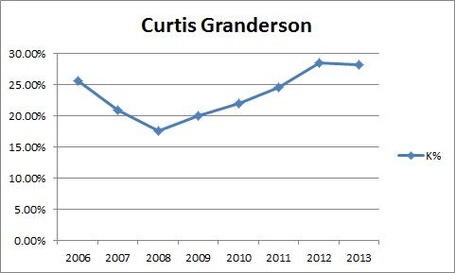 This isn't super encouraging, but Granderson had a big year in 2011 with a strikeout rate near 25%, so it's not as if he can't succeed with a high punchout rate. This trend could, however, be symptomatic of a larger problem. Granderson is swinging and missing more often.

You worry about a player with declining contact skills because it prevents his power from playing a major role. Granderson has the ability to slug .500, but he's only going to be able to do that if he isn't missing so often. It's interesting because we don't think about Granderson as a three-true-outcome player, but he's walking more than 10% of the time, striking out more than 25% of the time, and he hits a ton of home runs. Some of the home runs will vanish at Citi Field, but it's not the worst place in the world to hit if you're left-handed.

Granderson is a clear upgrade over what the Mets had in the outfield, but the question is if he's good enough to warrant the $60 million deal. It hinges on his ability to put the ball in play a little bit more often than he has the last two seasons, but Granderson's game is strong enough elsewhere that as long as his hitting doesn't drop off a cliff, he should be worth it.

In the end, this might end up being a slight overpay for an all around player with one distinct flaw, but if everything clicks for Granderson like we've seen it click in the past, he'll earn the deal and then some. It's a worthwhile risk for the Mets for a pretty simple reason.

Maybe the Mets end up paying above market value for Granderson, but the Mets need an outfield upgrade badly and Granderson is the highest ceiling option among players who won't command $100 million. Maybe he ends up costing a little too much per win, but the risk is worth it for a chance at one more six win season. The Mets are close enough to contention that gambling makes sense. You've got a decent corner outfielder, but you might have a star. A star could be the difference for the 2015 Mets, and a star might not be in their price range next offseason.

Neil Weinberg is a writer and editor at Beyond The Box Score, contributor to Gammons Daily, and can also be found writing enthusiastically about the Detroit Tigers at New English D. You can follow and interact with him on Twitter at @NeilWeinberg44.