One of less heralded trades of the offseason, the Houston Astros acquisition of Colorado Rockies outfielder Dexter Fowler was a trade for upside. Will the mercurial but toolsy Fowler produce outside of the high altitude of Coors Field and become a consistent performer?

Share All sharing options for: Evaluating an enigma: Dexter Fowler

In a trade between teams in rebuilding mode, the Houston Astros acquired center fielder Dexter Fowler from the Colorado Rockies in exchange for starting pitcher Jordan Lyles and outfielder Brandon Barnes. While the trio's combined 3.6 fWAR in 2013 aren't really a drop in the bucket, it is the continued allure of Fowler's raw talent and tools that is the focus of this deal, with Fowler's ability to remain healthy and live up to his skill set that will determine who 'wins' the trade in the long run.

Heath Bell to the Rays: Deja vu all over again? 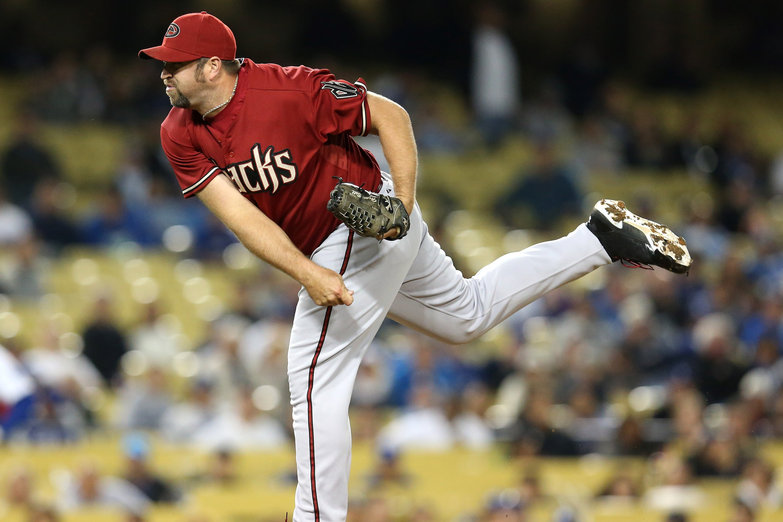 The #HeathBellExperience is making its way to Tampa Bay. Stephen postures that we might see a rebound with the Rays.

And what tools Fowler has. Physically and from a scouting perspective, he has a tall, lean, sinewy frame that speaks to his oodles of athleticism -- athleticism that brought much attention in high school as a basketball player, garnering multiple scholarship offers before being drafted in the first round of the 2004 MLB draft. Quick and rangy, Fowler covers a lot of ground in the outfield in a gracefully economic fashion; however, his legs have yet to really blossom to the point that Fowler is a real base stealing threat thus far at the major league level. Offensively, he is a powerful package, with quick hands and the added benefit of being a switch hitter, showing reasonable power from both sides of the plate.

From this raw talent perspective, Fowler appears to be the real deal. However, fulfilling this prodigious talent has been a point of contention for Fowler and the Rockies. From a defensive perspective, Fowler has never posted a season with positive UZR and only once has posted a positive DRS, his 50.2 innings of +2 DRS in his rookie season notwithstanding. With the bat, Fowler's numbers aren't quite as egregious, but are erratic, accumulating a 1.4 fWAR season on average, with a 104 wRC+ season being par for the course in his career. His power comes in flashes, the most recent flash being seen early last year before he was sidelined with wrist and knee injuries. Fowler is not a high average hitter, either, but does display good patience, averaging a 12% walk rate over his career.

In short, Fowler's tenure with the Rockies could be described as frustrating. All of the tools needed to play at an All-Star level fortify him, yet little or inconsistent production has been seen up to this point. Included in this trend has been Fowler's unfortunate propensity to be frequently hampered in part by nagging injuries throughout a season. While one must stop short of calling him injury prone, Fowler does fall victim to a number of dings, as the table below, showing the games lost due to injury over his career, separated by general body part, describes:

While a total of 78 games lost to injury over a span 667 career games and three trips to the disabled list isn't that egregious, Fowler's inability to bounce back soon after returning to health and contributing immediately did appear to be an issue.

With these difficulties on hopping back on the proverbial horse post injury comes the question of maturity -- while Fowler is a highly intelligent player and one with plenty of self awareness, there has been a question of whether Fowler will ever continue to properly develop and grow as a player, one with the ability to overcome the many lows can come with a 162-game season.

Yet, Fowler does have one aspect of his game that is a double edged sword in his development -- his ability to switch hit. While injuries can and do happen, Fowler's misgivings may not be so much a matter of a full return to health more so than a psychological one, and one that is predicated upon the perfect timing and groove that he feels with both of his swings. Simply put, Fowler may just need additional plate appearances and repetitions to be feel completely in tune with both swings; considering he is also relatively new to baseball and is just hitting his athletic prime, it may simply be a matter of practice making perfect more so than injurious misgivings.

While on the subject, let's take a look at how Fowler's last five years have fared compared to all other switch hitters, using OPS: 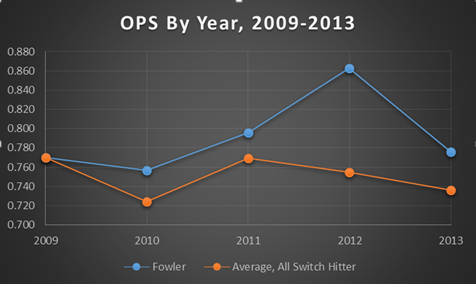 Fowler, in comparison to the average switch hitter brethren, is above average, even with the quirks and roadblocks that arise due to his raw talents still a little undercooked and the occasional injury throwing off his timing.

So what does this portend for the Astros?

With a reasonable assumption that Fowler will remain healthy and continue to hone his mental and physical hitting mechanics from both sides of the plate as he enters his peak years physically, the Astros very well may have plucked Fowler at a great time. While the incorporation of all of his baseball skills into a cohesive product in the form of a high WAR season might still be another year away given the change of teams and leagues, the trade for Fowler does smile favorably upon the Astros.

All data courtesy of FanGraphs and Baseball Prospectus.