Heath Bell to the Rays: Deja vu all over again?

The Rays acquire another reliever coming off a rough season. Sound familiar? It should. But will it be as successful as acquisitions past?

Share All sharing options for: Heath Bell to the Rays: Deja vu all over again?

If you missed it, it's been a busy past 48 hours in baseball. The Hot Stove has been on fire as we've seen ..

And that's not including the Mariners joining the Cano hunt, Brett Anderson on the block, Beltran's 3-$48 million offer, the Mets meeting with Granderson, and the new Posting system negotiations. Yeah, things have been a little busy.

Astute fans of baseball will notice that there was one notable transaction left off that list. Two years ago, this sort of transaction would've sent a few more shockwaves through the baseball world. That's right, I'm talking about the Blue Jays non-tendering J.P. Arencibia the Tampa Bay Rays acquiring Heath Bell in a three-team trade.

Why isn't this as big of a story compared to two years ago? Let's recap. Bell, the successor to Trevor Hoffman, had just come off a three-year run from 2009-11 in which he put up 4.6 WAR and 132 saves. He spun that into a three-year, $27 million contract with the suddenly free-spending Marlins, and promptly put up a bomb of a season. (We'll get to the details later.) The next offseason, Bell was traded to Arizona, started out the season as the closer, and ended it in a setup role. 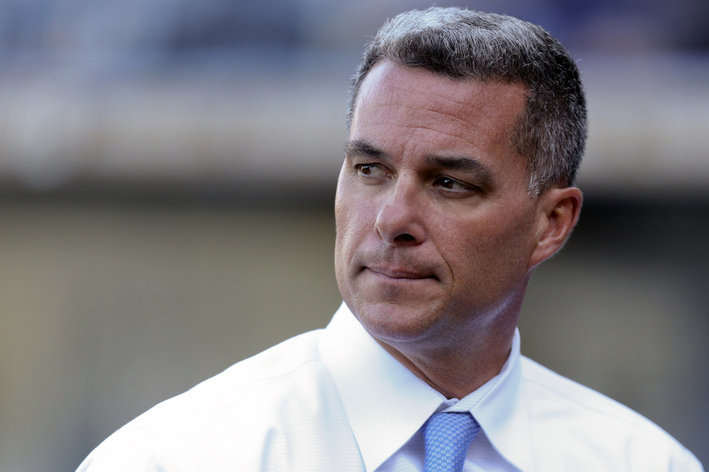 While player extensions get more press, GM extensions can also be critical to a team's success. Andrew Ball looks at the mch debated decision by kansas City to extend Dayton Moore through 2016.

At first glance, Bell may seem done: he's a 36-year old reliever whose pitch values have been declining. But despite that, many seem upbeat about the possibilities. Inside Pitch's Casey Stern and Jim Bowden were discussing his bounce-back potential while speculating that Bell --described as a "big little kid" by GM Kevin Towers -- will fit in well with Tampa Bay manager Joe Maddon. Matt Snyder of CBS Sports wonders if Bell will be the Rays next reclamation.

It seems Joe Maddon and pitching coach Jim Hickey have something going on with veteran/castoff relievers. They took Grant Balfour (0.3 WAR career in 92 2/3 IP) and got 4.0 WAR in 181 IP over three seasons. They squeezed 67 2/3, 67, and 71 1/3 IP out of Joel Peralta, an up-and-down reliever who hadn't topped hadn't topped 55 IP for three years prior. They even managed to get contributions from Jamey Wright and Kyle Farnsworth. To really drive home the point, let's play a little game of blind resume.

Player B is Heath Bell from the past two seasons. Player A is Fernando Rodney from 2010-11, his two seasons in Los Angeles before joining the Rays.

Does this mean Bell will turn in a year of Rodney's 2012-style dominance? Not necessarily, and, frankly, highly unlikely. But he doesn't have to be at that level to earn what they Rays are paying him.

Bell is in the final year of three-year contract he signed with the Marlins prior to 2012, and will earn $9 million all told. However, the Marlins are on the hoof for $3 million, and the Diamondbacks reportedly sent $500K to Tampa. That leaves the Rays paying Bell $5.5 million for 2014. Depending on your views about the dollar value of a win, Bell would need to be accumulate 1.1 WAR (Per FanGraphs) or 0.8 WAR (Per BtBS writer Lewie Pollis).

However, despite this, it still is a little tougher to see Bell bouncing back like Rodney. Even in his down year of 2011, Rodney mostly had pitch values/100 in line with his career numbers (-0.43, -1.82, 2.02 compared to 0.01, 0.18, 1.37) Bell hasn't had such luck. Since 2010 (His last great season), Bell has seen both his fastball and curveball decrease in movement, swinging strike percentage, and increasing in contact rates, especially line drive rates. In other words, his stuff seems to be diminishing. But, it must be admitted that Jim Hickey has coached some impressive turnarounds before. I think a 65 IP, 0.8 WAR season is an entirely reasonable, almost cautiously optimistic, outlook for 2014.

One final aspect to keep in mind is that Bell has a potential $9 million option for 2015, which vests if he finishes 55 games this coming year. During his peak in San Diego, Bell finished 59, 57, and 54 games. The past two years, Fernando Rodney finished 65 and 55 games for the Rays. 55 games is within the realm of possibility, but the Rays aren't the type of team that would want to pay $9 million for a closer, so this is a situation that should be monitored over the season.

In the end, on a day when the top free agent closer signed a 2-$20 million contract, and the closer with the most saves over the past two seasons was traded for a (probably) AAAA player, the Rays took a bet. They didn't bet on an formerly ``proven" closer who happened to cost half as much as those two mentioned above. They bet on their coaching staff's ability to rejuvenate old arms and get every last bit of pitching they can out of them. Whether or not it pays off remains to be seen. However, if it does, it can go a good ways towards pushing the Rays back into the playoffs in 2014.