In the Bill James New Historical Baseball Abstract, Bill wrote an essay titled "Baseball 2015." This is the second post to explore how well his predictions have held up.

Share All sharing options for: A(nother) look back at Bill James' "Baseball 2015" essay

Last week I wrote a post titled "A look back at Bill James' "Baseball 2015" essay," which covered the first point of an essay he published in the New Historical Baseball Abstract in 2002. This post focuses on points 2 and 3 of the essay, which are: 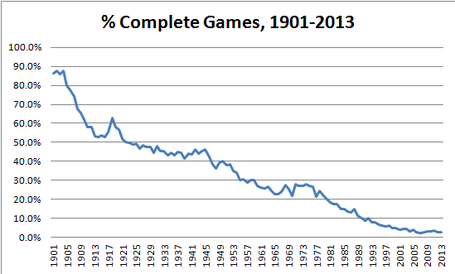 Unless pitch count thinking changes, it will be a long time before complete games come close to returning to the levels of even 1990. Complete games slipped below 50% of games almost 100 years ago and show no signs of increasing soon.

Game length has increased, and it's interesting to see how much over time--this chart shows game length increase since 1950, using data adapted from Baseball-Reference.com:

Go back to 1901 and game lengths approach the 2-hour mark. Game length has increased by about 45 minutes, or around 33% since 1950. Several things contributed to this--TV in the mid-1950s, increased offense in the 1990s, but one thing that James discussed is amazing when plotted against the increase in game length:

Not every pitching change increases game length, just mid-inning ones, and as they pile up, games lengthen. James' game-quickening suggestions included limiting the number of mid-inning pitching changes as well as enforcing already-existing rules regarding time between pitches. The days of the at-bat in which the hitter actually stays in the batter box has gone the way of the $1 ballpark beer and won't return soon without explicit support from Major League Baseball and enforcement by umpires. It can be done, I just don't see a groundswell of support for such enforcement, which poses a very simple question that holds true in every fact of life: what's the point of a rule if it's not going to be enforced?

Reducing pitching changes will be difficult. Platoon advantages are very real--this is data from 2013:

Past research has shown that a difference of 5-6 points of batting average is statistically significant, so pitching staff size and the number of pitchers used in a game increased to exploit this advantage.

Since I have the data, this chart shows how often the Left-Handed One-Out Guy (the LOOGY) is used as defined since 1950: 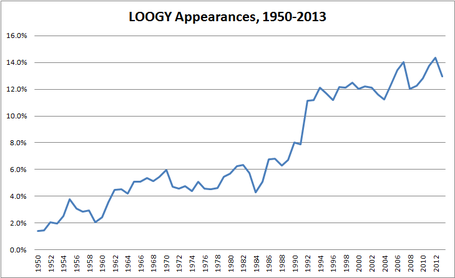 Changing the definition to left-handed one-inning guy would be more accurate, but the LOOGY isn't the cause of the increased length of games.

Another suggestion James made with even less chance of adoption is to reduce the time between innings to 90 seconds from 2 minutes. Before you start laughing uncontrollably, consider the ramifications--this could decrease game times by around 9 minutes for a typical 9-inning game. This sounds like a lot of missed advertising potential, but the problem every professional sport that isn't football faces is excess inventory--too many games, too much ad time, and not enough demand. If you don't believe me, compare the caliber of advertiser during a typical NFL game (sold nationally) vs. a baseball game (typically sold locally). It's possible reducing ad time inventory could increase its value and make such a move revenue-neutral--that's how scarcity works in the real world.

FanGraphs added Pace to show how quickly pitchers work and in 2013 it ranged from R.A. Dickey (17.9 seconds) to David Price (25.8 seconds) between pitches among qualifying starters--about a 50% variance. If baseball were to enforce a strict 20-second maximum between pitches and shaved the time between innings by 30 seconds, the average game could be played in around 2 hours, assuming 300 total pitches per game. In fact, if the 20-second clock was adopted, they could even keep the extra 30 seconds of advertising and still be right at the 2-hour mark. In the short term it might impact ancillary revenues like concessions and souvenirs, but as fans adapted to the quicker game these things would correct themselves in short order.

I'm 51 years old, but that makes me younger than the average World Series viewer, which is around 54 (you may or may not be able to read this Wall Street Journal article). I have two 20-something daughters, the older a teacher who attended college 20 minutes north of Milwaukee and really enjoyed going to Brewers games, the younger about to graduate from college in Chicago who may or may not be aware sports exist. Baseball, and indeed every sport that isn't football, is poised on the precipice of a new era, one in which attendance growth isn't guaranteed. This graph shows average attendance since 1950: 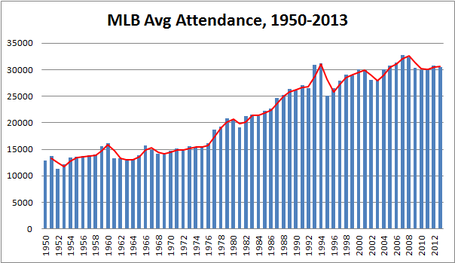 The generation that enabled the growth that began around 1980 (that would be mine) is getting older, and it's not clear the next generation has developed the habit of game attendance. It's certainly not just game length, but it plays a factor--adding in travel time, attending a game is a serious commitment of 4-6 hours. Baseball can't solve travel issues, but they can certainly control what happens inside the ballpark, and the changes don't need to be major. Nothing is added by lengthening a baseball game from 2 to 3 hours, but keeping the game fast-paced and moving can be a major factor in bringing in and retaining the next generation of baseball fan.

All statistics courtesy of Baseball-Reference and FanGraphs.