The hidden perfect games of relievers

Perfect games are one of the most celebrated achievements in baseball. So, why don't we praise relievers that retire 27 or more consecutive hitters in the same way?

Share All sharing options for: The hidden perfect games of relievers

Last season two incredible feats of pitching went largely unrecognized. Unless you follow the Red Sox or Dodgers, you probably are not aware that Koji Uehara and Kenley Jansen threw perfect games. Interestingly, these accomplishments were not splashed all over the front page of a newspaper. For some reason, a reliever retiring 27 consecutive batters is not as newsworthy as when a starter does so. While these so called Hidden Perfect Games have received some attention, mentioned in a few articles (here, here and here) and discussed on an episode of the Effectively Wild Podcast, there is considerably less attention given to the accomplishments of the relievers. Perhaps the lack of attention is due to it being easier for relievers to retire 27+ consecutive batters. They get rest between outings and have many more opportunities to complete such a streak. If this is true we should expect relievers to have thrown more perfect games than starters, thereby leading to the relative lack of interest. Is that really the case?

Using Baseball Reference's Play Index Streak Finder I established a list of the longest streaks of consecutive innings pitched by relievers without allowing a baserunner (i.e., hit, walk, intentional walk, hit-by-pitch, reached-on-error). Data were drawn from regular season games between 1947 and 2013. 1947 is used as the start date in order to limit the search to integrated baseball. From these data, all relievers with a streak of 7.0+ innings pitched were selected for further examination. The play index only parses consecutive games with perfect innings so it was necessary to look at each reliever's outing before the streak started and their outing after the streak ended to see if additional batters had been retired. It should be noted that only looking at streaks of 7.0+ innings pitched may miss a few pitchers who had a game prior to or after their streak with a long perfect outing, but these are likely rare and would not dramatically change the findings here. In addition, because the focus here is on relievers it will miss starters that had a perfect inning streak over several outings. These could be considered in a separate post. In the end 16 relievers have retired 27+ consecutive batters, thus gaining membership to the prestigious Hidden Perfect Game club. The pitchers along with relevant statistics are presented in the table below:

7 other relievers (Justin Speier, Bobby Parnell, Luke Gregerson, Kyle Farnsworth, Jason Isringhausen, Grant Balfour, and Tony Watson) came close, but did not get the 27th batter retired. So there have been 16 hidden perfect games. How many traditional perfect games (thrown by starters) have occurred? Given the hypothesis we expect fewer. This turns out to not be the case. Over the same period there have been 17 regular season perfect games:

Starters and relievers have actually thrown a similar number of perfect games. This is initial evidence against the idea that it is easier for relievers. Taking the analysis a step further we can look at the frequency of perfect games over time. Perhaps there are differences in when the perfect games occurred, which then drives the differential response from fans and media. 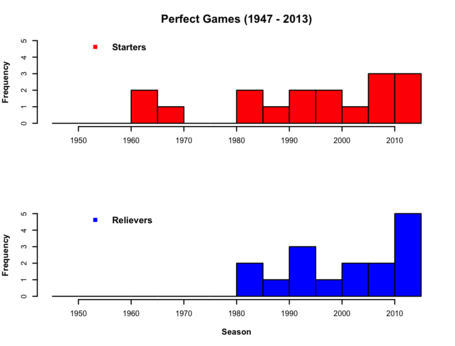 The distribution of perfect games over time is similar. It is not surprising that relievers did not throw a perfect game until the ‘80s, as relief pitching was not consistently used as a strategic component of the game until then. The largest discrepancy in the distribution is seen within the last 3 years where relievers have thrown two more perfect games than starters. This is likely attributable to the increased specialization of relief pitching. Still there has not been more attention to these achievements.

We can further examine the hypothesis by comparing relevant statistics of starters and relievers from their perfect games. Strikeout percentage (K%) and win probability added (WPA) are two such statistics. Now, as you likely noted there are relievers on the list that have consecutively retired more than a perfect game's worth of batters. Including these extra outs is reasonable because selecting a start and end point within the streak would be arbitrary, so the entire streak is included. Because this extra information is not included for starting pitchers (examining the end of the start prior to the perfect game and the start of the start after the perfect game would garner it) the WPA comparison is made on a per out basis (WPA total / batters retired). These data are given in the table below:

Despite the 4.1 difference in K%, there is statistically no difference between starters and relievers; roughly a third of the batters faced were retired via strikeout. The difference in WPA per out is statistically different. On average each of the relievers' outs added almost twice the win probability of the starters' outs. This is not entirely surprising given that relievers are typically pitching in higher leverage situations than are starters. However, this difference may speak to the difficulty of throwing of a perfect game. Relievers are typically pitching in the later innings of close games. Allowing baserunners and runs can dramatically shift the outcome of a game; hence the high leverage. Starting pitchers may pitch many innings when allowing baserunners and runs will not have the same impact on win probability. The difference in WPA/out does not necessarily confirm it being more difficult for relievers to throw a perfect game. However, it does show that relievers would be experiencing significant, and perhaps similar, pressure each time they pitched. Taken with the similar frequencies of perfect games over time, this seems to show that the feat is comparable for starters and relievers. Yet, despite this evidence it remains that perfect games and hidden perfect games are responded to very differently.

The difference in response from fans and media might be due to the fact that the longer a perfect game remains intact a perceived higher leverage situation develops. Each out critically affects the probability of keeping the perfect game, but not necessarily the probability of winning the game. For example, the San Francisco Giants won Matt Cain's perfect game 10-0. The only interesting (read: high leverage) aspect of the game was whether the perfect game would happen. On the other hand the Mariners won Felix Hernandez' perfect game 1-0. Was there added leverage of the perfect game being intact during the late innings of a close game? As far as I know there is no way to measure this type of leverage on the pitcher. However, I suspect that players, fans and media would report experiencing a leverage increase. The anxiety of the moment contributes to a distinct memory and a need to record it. Relievers may achieve the same feat but their assigned role requires them to do so across several outings. It may take them a month to complete their perfect game. In fact the hidden perfect games given here took on average 8.56 outings and 23.07 days. In one case (John Wetteland) it even lasted across seasons. Starters, on the other hand, took on average one 130.11 minute outing to complete their perfect game. The ability to remember even the last 5 outings of a given reliever strains the ability of the human memory system and certainly comes without the perceived leverage of an intact perfect game.

In the end these data provide evidence against the hypothesis that it is easier for a reliever to throw a perfect game. The question of why we celebrate these pitching feats differently remains. As suggested above it is likely an issue of sequencing. Starting pitchers retire 27 consecutive batters in one game; a clean digestible package. This is not true for relievers. Despite being an integral part of the game, some relievers' accomplishments require more work from the fan to appreciate. Hopefully this work has revealed some remarkable relief pitching (that does solely focus on Saves) and can serve as a start in the celebration and recording of the hidden perfect game.