In his New Historical Baseball Abstract, Bill James wrote an essay on what baseball might look like in 2015. How well have his predictions held up?

Share All sharing options for: A look back at Bill James' "Baseball 2015" essay

For Christmas I received the Kindle edition of the New Bill James Historical Abstract, which is still an indispensable resource over 10 years after its publication. I purchased this version for the ease of looking up items I know I've seen in my previous four readings, and as I was breezing through it yesterday I ran across an essay titled "Baseball 2015" which is on page 316-17 of the hardcover edition. In a bleak Iowa winter with 8 inches of snow on the ground and no respite in sight, this is as good a time as any to see how well his essay has stood up.

James made four predictions which I quote verbatim:

From here on out the words are mine and this post will cover only the first point, with my next post covering points 2 and 3.

As long as baseball has existed there have been cries about players' salaries from players, owners, and fans. This chart shows pertinent payroll values (in millions of dollars) since 1985 and is adapted from data at Baseball-Reference.com (B-R): 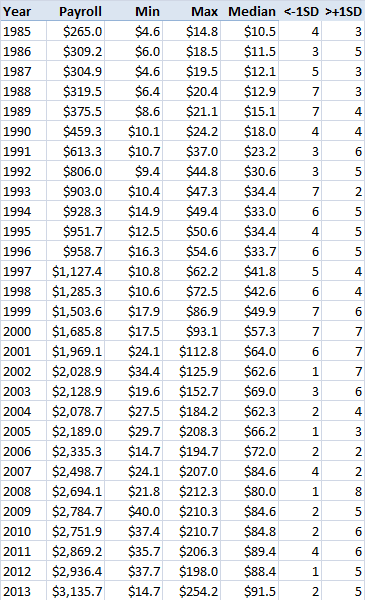 Baseball salary data at B-R only goes back to 1985, and at the time of James' writing (1999-2001), there was cause for legitimate concern. Baseball did appear to be separating into two camps, with 13 of the 30 teams 1SD removed from the median. This seems to have corrected itself in the intervening years, with 2013 having only 7 outlier teams. How did this happen?

I'll concentrate on two reasons, knowing there are probably more. The first is improved revenue streams top-to-bottom throughout baseball. This does not mean all teams are equal in revenue--as long as teams negotiate local TV rights, advertising, and other income sources outside of a national TV contract, there will be disparities, but they will be smaller than in the past. The current local TV broadcast rights range from around $18 million for Miami and Pittsburgh to $150 million for the Texas Rangers. As large a spread as this may seem, in terms of bottom lines, the #1 team in revenue was the Yankees, with estimated revenue of $471 million. The bottom team were the Rays at $167 million. A revenue disparity of 3x is far different that the 25-50x that were common at the time of James' writing.

James argued a revenue-sharing agreement for local TV deals could be developed and the day may come when that actually happens, but currently there's no movement toward such a deal. Nor is it absolutely necessary--the Astros had a 2013 payroll of around $14.7 million, not because of internal cash flow issues (they had revenues of almost $200 million in 2012 according to the latest Forbes valuations) but because they made a conscious choice to get younger and cheaper as their new talent develops. Whether this will work out in the long run is still an open question.

The other team more than 1SD below the 2013 median salary is the Marlins and no one knows what they're doing, including their ownership. They made a disastrous attempt at buying success in 2012 that worked so well every player acquired--Mark Buehrle, Jose Reyes and Josh Johnson, as well as homegrown talent Hanley Ramirez was jettisoned by the start of 2013 and Ricky Nolasco was dealt a few months later. There's a world of difference between unfair economic conditions and inept management, which is what the Marlins currently have. Their issues are not reflective of baseball economic realities but are completely self-induced. They have resources and are choosing not to use them on payroll.

The second reason for less payroll variability is the understanding that buying a championship is extremely difficult to do. It's not impossible--solid arguments can be made that the 2009 Yankees purchased their World Series championship and the 2013 Dodgers were rudderless until big-money acquisitions like Adrian Gonzalez, Carl Crawford, Ricky Nolasco, Hanley Ramirez and Zack Greinke came together and began playing like a team. The fact that something can happen is far different from that it will happen. Two charts illustrate this--the first shows the payroll rank of teams with the most wins in a given season:

This tells a different story. Other than outliers like the 2013 Dodgers and 2008 Yankees, it appears high payrolls do correlate with winning, and who wouldn't expect that? The difference is the disparity in payrolls appears to be diminishing, and in many cases low payrolls are made by choice and not out of necessity or lack of resources. In other words, outspending the league helps, but it's far from a guarantee.

Big contracts like the ones given to Albert Pujols, Josh Hamilton, Prince Fielder and Robinson Cano get all the publicity, but success lies in the support players who complement these signings. The problem Bill James identified is essentially solving itself as teams realize how difficult it is to purchase victories and instead try to develop it. Can teams increase the odds of winning by spending more money? Of course, but the teams of the future are spending more money on talent recognition, development, and scouting and less on free agency (relatively speaking) because free agency pays for past performance. As this realization takes hold, the payroll disparities will lessen--they won't disappear as long as one team is willing to spend freely, but payroll choices will be driven by logic instead of blind hope. The third-lowest payroll in 2013 belonged to...the Chicago Cubs? It wasn't for lack of money, but from an understanding they're nowhere near contention and spending money on players for a team at least a year away from contention doesn't make sense. It's the same reason the A's and Rays have been successful with lower payrolls - free agency is a really difficult way to build a team, so teams that don't invest heavily there aren't at a huge disadvantage.

Like just about everything he researches, Bill James was right on the money in identifying this important issue in the game. Issues come and issues go, with the only constant being they will generally correct themselves if given the chance. In the case of economic disparities, teams found new revenue streams and simply resisted the urge to spend with the big-market teams and found they could still have success, which has led big market teams to the realization that spending efficiently is better than spending big.