Dayton Moore signs on for two more years in KC

Kansas City has extended general manager Dayton Moore through the 2016 season. Royals fans don't seem to be too thrilled about the move, but should they be?

Share All sharing options for: Dayton Moore signs on for two more years in KC

To the surprise of many, the Royals announced on Friday that they were extending the contract of general manager Dayton Moore through the 2016 season. Moore, who's been running the operation in Kansas City since June of 2006, has drawn plenty of criticism from fans for failing to make a single playoff appearance during his tenure. You can get a general sense of the lack of support from the reaction over at Royals Review:

This means that Dayton Moore will get two more off-seasons to jump into the free agent marketplace before it takes shape, undervalue getting on base, sign middling talent to deals one to two years too long, hoard #4 starters, field trade offers from parties with whom he is outmatched, place a premium on grit, force an inflexible and outmoded pitching development program on all of the arms in the system, insist upon the non-existence of advanced metrics, retain the services of the likes of Chris Getz and Wade Davis while clinging to the notion that they are something they are not, commit countless public relations gaffes, and incense this corner of the internet with his general baseball philosophy.

Not exactly a ringing endorsement, is it? Admittedly, I'm not a Royals fan and I haven't been watching Moore's reign with any real urgency. In doing so, I've pretty much assumed that he has been a subpar GM, based solely on the opinions of the media and the fanbase in KC. Of course, I know better than to simply accept conventional wisdom in baseball, regardless of how many people believe something to be true. So with a new contract in hand I asked, should we re-think Dayton Moore's performance as a general Manager?

When Moore took over the Royals in June of 2006, the team was coming off of a 56-win campaign in the previous season, and was off to the worst start in baseball at 15-43. The team's best position players that year were Mark Teahen, Mark Gruzidlanek, David DeJesus, and Emil Brown while the pitching staff as a whole totaled -3.8 rWAR. That 2006 club had more future Atlantic League players (Teahen, Angel Berroa, Joey Gathright, Angel Sanchez, Andy Sisco, Scott Elarton) than future All-Stars. The farm system wasn't much better either. Heading into the 2006 season, Baseball America ranked the system as the 23rd-best in baseball with really only Alex Gordon and Billy Butler as exciting prospects. Putting it nicely, Moore had an imposing task at hand, turning this team into a contender.

The prospect staff at Fake Teams ranked the best fantasy prospects in the Royals system.

Immediately, Moore set out to rebuild the team through the acquisition and development of minor league talent. His first opportunity came early in 2006, when the Royals selected right-handed pitcher Luke Hochevar with the top overall pick in the amateur draft. Yes, that pick could have been used on Evan Longoria, Clayton Kershaw, or Tim Lincecum, but Hochevar was viewed as one of the top talents available and he's outperformed other top-ten picks like Andrew Miller, Greg Reynolds, Brad Lincoln, and Billy Rowell by a long shot. And it was that selection that started the Royals ascension to one of the best scouting and player development organizations in Major League Baseball.

From 2006-2010, the Royals added Hochevar, Wil Myers, Eric Hosmer, Mike Moustakas, Danny Duffy, Aaron Crow, Christian Colon, Chris Dwyer, John Lamb, and Mike Montgomery through the draft. And they may have done even better in Latin America, passing on higher priced players to acquire Salvador Perez, Yordano Ventura, and Miguel Almonte for a little over $100,000 total. In a relatively short time, Moore and his staff had built the best farm system in baseball heading into the 2011 season, a system teeming with impact talent and a ton of depth.

Unfortunately, as Sports Illustrated's Jay Jaffe says, that farm system hasn't been enough to generate wins at the highest level:

From 2007 through '12, K.C. put together the AL's worst record (419-553, .431 winning percentage), never winning more than 75 games or finishing higher than third in the generally weak AL Central. In that span, the Royals led the majors in deadwood: no team used more position players 26 and older - non-prospects in other words - who compiled 1.0 WAR or less while playing in at least 150 games.

That is somewhat misleading, however, because Moore was never expected to deliver wins in his first few seasons at the helm. Not to mention, the Royals have actually improved upon their previous record in every season outside of 2009.

Regardless, after years of waiting for "the plan" to begin working, 2013 was a make-or-break year for the organization. Following a 72-win 2012, the young position player nucleus of Gordon, Hosmer, Moustakas, and Perez appeared ready to take the next step. After compiling one of the league's best bullpens, the only piece missing was frontline starting pitching. So Moore set out to acquire those pieces, beginning by trading Brandon Sisk to the Angels for Ervin Santana. The acquisition of Santana was among the best made by any team last offseason, adding a three-win pitcher for next to nothing because he was coming off a terrible season. 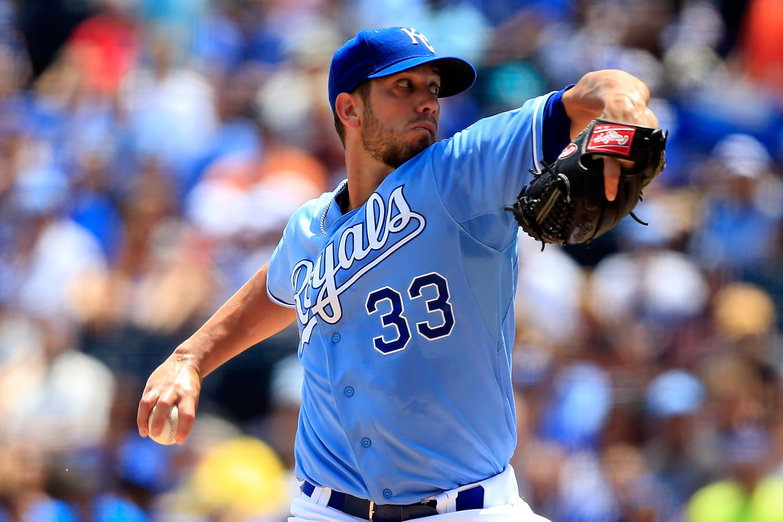 He followed that up with a much more controversial move, trading Baseball America player of the Year Wil Myers and a package of other prospects to the Tampa Bay Rays for James Shields and Wade Davis. Immediately, Moore was slammed for trading Myers, the eventual 2013 Rookie of the Year. But I've got to say, I loved and still love that deal from KC's perspective. At some point, organizations need to stop building for the future and finally announce that they are contenders, which the Royals did with the trade. They needed starting pitching, and it's not often that a team can acquire one of the top-15 arms in baseball like Shields.

Ultimately the 2013 team fell short of a playoff berth, finishing five and a half games out of the wild card race. Even though the 86-76 record was the team's best since the 1994-strike shortened season, the campaign was, once again, deemed a failure by many.

During Moore's first year in KC, the other last-place clubs were the Tampa Bay Rays, Washington Nationals, Chicago Cubs, Colorado Rockies, and Seattle Mariners. Excluding the Rays because they have become an exception outside of the norm, the other four teams have combined for just two playoff appearances among them. The Pittsburgh Pirates finished one game out of last place that year and they just made their first playoff appearance in two decades this past season.

Dayton Moore took over the worst franchise in baseball eight years ago. Without the aid of a large payroll, he has built this team into a bonafide contender for the foreseeable future.The Royals may lose Ervin Santana to free agency this year, but they'll acquire a draft pick if he leaves and they have already replaced him with Jason Vargas. The team also has Danny Duffy and rookie Yordano Ventura ready to claim rotation spots, with 2012 first round pick Kyle Zimmer not far behind. On the position player side, Moore has already signed Perez, Gordon, and Butler to team-friendly extensions, and Eric Hosmer may be next. Beyond that, Kansas City has another wave of talent including Raul Adalberto Mondesi, Hunter Dozier, and Bubba Starling from the never-ending Kansas City farm system. For the first time in a long time, there is a genuine reason to be excited about the Kansas City Royals, and the reason is largely due to the work of Dayton Moore and his staff. Armed now with a little more job security, he should be able to continue what he has started. Like all executives, Moore's time in Kansas City will be gauged by wins and losses, but this extension should serve as a reminder that he's just getting started in that department.