Can Alex Wood be "The Next Big Thing?"

Share All sharing options for: Alex Wood and small samples

Ever since the Braves were ousted in the NLDS by the Dodgers, fans and pundits have been clamoring for the front office to make a push for trading for an "ace." The only problem with that is this: trading for one is hard.

By all accounts, the only true ace available is David Price. I don't buy the talk that Chris Sale is available -- I mean I'm sure he could be had for a pie in the sky offer, but let's be realistic. There's not much doubt that Price would make the Braves better in 2014. On the other hand, they would more than likely have to mortgage a small -- perhaps a large portion -- of their future in order to relocate him to metro Atlanta. Mark Bowman, MLB.com's Atlanta Braves beat writer, reported recently that the Rays were shooting for a package consisting of Alex Wood, Christian Bethancourt, and two other "top prospects." The top prospects portion of the article is somewhat confusing, but, nonetheless it's a request the Braves weren't inclined to meet. I'm not sure I blame them, because as good as Mr. Price is, the Braves have to operate in a cost-efficient way and trading away cost-controlled talent likely isn't for the best.

If you couldn't tell yet, I'm in agreement with the Braves about not giving up a huge amount of talent in exchange for Price because I believe the Braves' rotation is in better shape than most people think. Mike Minor and Kris Medlen are solid. Julio Teheran looks to be well on his way to becoming the starter that many projected for years. The back of the rotation is a little more questionable at the moment. No one knows if Brandon Beachy can stay healthy. Gavin Floyd is a quality arm -- if he's healthy. And David Hale is probably perfectly suited to be a spot starter or number five guy. Alex Wood, who will likely slot into the number four spot, is who interests me the most.

Wood's performance in 2013 was very good, bordering on spectacular. Everything in this piece comes with a small sample size caveat, but Wood nonetheless was one of the best pitchers in the game -- pitch-for-pitch -- in 2013. His FIP- of 71 was good for 16th best among pitchers with at least 70 innings pitched.

After being dynamite out of the bullpen, Wood was given the opportunity to start 11 games during the second half of the season. Although he wasn't quite as good as a starter -- for a variety of reasons -- he still pitched very well.

There's no mistaking how good Wood was when he entered the game out of the bullpen. Part of this is due to his ability to throw with a little more velocity because there was no need to conserve energy and because he was used in a match-ups friendly manner.

Change-Ups and Their Effect

The main reason I'm so encouraged about Wood leading into 2014 is his pitch mix. He only throws three pitches, but he has the ability to throw them to all opposing batters, no matter which side of the plate they settle into. 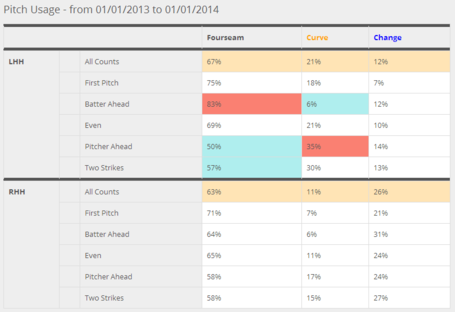 As you can see, he isn't scared to throw his curve versus right-handed batters. Nor is he worried about throwing his changeup versus lefties, throwing the pitch 11% of the time versus same-sided batters. Wood's fastball is great at generating groundballs. While his curveball is ever improving after a Spring Training session with Craig Kimbrel, but in my opinion, Wood's changeup is hands-down his best pitch, especially when he's able to keep it down in the zone ... which he is very good at. 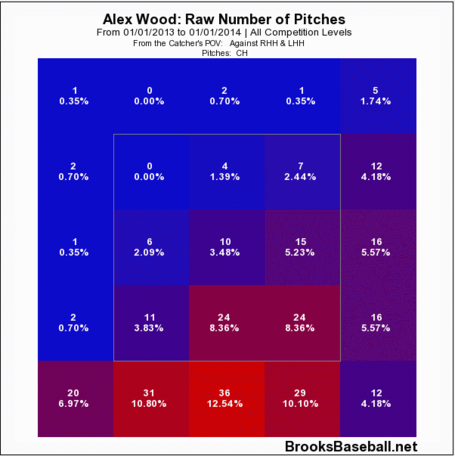 It's hard to throw the ball down in the zone more than Wood did with his changeup in 2013. Obviously, he'll get hurt very few times with the pitch if he stays down there.

Thanks to research done by Baseball Prospectus' Harry Pavlidis on changeups, we have a better understanding of which off-speed offerings generate more strikeouts, more grounders, or a combination of the two.

Mr. Pavlidis' findings, summarized here by Brett Talley, are very intuitive. A larger gap of mph between offerings leads to more whiffs. A smaller gap will lead to more grounders or weak contact. If you have elite velocity and a nice sized gap, you can achieve both of those things. If you're able to sink it as well? Even better.

Wood's fastball velocity borders on elite. In 2013 his velocity on average was ~93 mph, although it ticked down a little as a starter. His changeup averaged ~85 mph. So, Wood's mph gap between his fastball and changeup is ~8 mph, or near league average. He's good there. Where his changeup really excels in horizontal movement. Wood's changeup ranked eighth among changeups for horizontal movement. He doesn't get as much sink on the offering as many of his peers, but he's still able to generate a top-25 rank in whiffs per swing and a top-50 rank in groundball percentage. It's a little best of both worlds. We want strikeouts and grounders. It is tough to get hurt when the ball is either in the catcher's mitt or rolling towards Andrelton Simmons. Wood's changeup is already a fantastic offering, but with a little more seasoning it could really put him over the top.

It's nearly impossible to write anything about Alex Wood without mentioning his mechanics. There's nothing I can say about him that hasn't been said by people who are much more informed in the scouting practice than myself. It's an odd delivery. See for yourself.

That's Troy Tulowitzki, one of the game's premier hitters, looking absolutely foolish on the pitch I gushed over in the paragraphs above. There's no doubt that Wood's delivery is unorthodox. Many, many scouts feel that Wood is better suited for the bullpen due to his delivery and injury risk -- he's already had one Tommy John surgery. However, I'm in the camp that if he wishes to start -- and can be effective -- then you start him. Every pitcher in the major leagues has a limited number of bullets in their arm. I'd get the most possible value out of those bullets if I was Atlanta.

Projection systems are rather high on Wood this season, especially ZiPS.

Oliver is much lower on Wood than the other two projections but, all in all, it looks like 2014 could be a nice season for Wood. Each projection system projects a slight regression in K% and in BABIP. Both of those seem more than fair to me.

Across all levels in 2013, Wood amassed 139.2 innings. As a rule of thumb, many managers don't like to increase a pitcher's innings count by much more than 30, so Wood could reasonably be expected to throw ~170 innings in 2014, perhaps a little more. I don't think it's much of a stretch to think that he could put together at least a two-win season in 170 innings, with a solid chance at producing much more.

To get back to the introduction a little, would Price, Sale, or perhaps Samardizija make the Braves better in 2014? Of course. A little more depth never hurt anyone, but is the upgrade worth the price (no pun intended)? We've went over what it would cost the Braves to acquire Price and it's obvious they thought it was too much. The Cubs, reportedly, wanted a package built around Jason Heyward or Justin Upton, which is absolute crazy pants, especially considering they're all under control for the same amount of time, and the latter two are better players. I'd assume the White Sox would want even more in return for Sale, and they should due to his team-friendly contract.

All statistics courtesy of FanGraphs, Brooks Baseball, and Baseball Prospectus.