Breaking out of the sophomore slump

Handicapping four second-year players who struggled in 2013 and their chances to rebound in 2014 and beyond.

Share All sharing options for: Breaking out of the sophomore slump

It seems to happen every year: a group of players stumble in their second major league season after promising rookie campaigns. The future, which once appeared so hopeful and certain, suddenly looks murky and unclear, as the slumps and struggles pile on top of one another with each passing week.

In a way even, the "sophomore slump" makes some intuitive sense. Players often fall back down to earth when their performance is subject to a larger sample size and opponents begin to discover—and exploit—the weaknesses in their game. Scouting reports get passed around, flaws become increasingly apparent, and soon, succeeding in the majors becomes a far more difficult task.

With that in mind, I’ve chosen four players who fell prey to the dreaded sophomore slump in 2013 and took stock of their chances to bounce back next season.

Cespedes was one of the most valuable players in the league in 2012, but his offensive performance fell quite dramatically during his sophomore campaign. After posting a 137 wRC+ as a rookie, Cespedes was much closer to league average this past season, finishing with a 102 wRC+ and a lowly .294 on-base percentage. He drew fewer walks and struck out far more (his strikeout rate increased by 5%), while also hitting fewer ground balls and line drives.

Most telling was his drop in zone-contact percentage, which fell from a below-average 84.2% last season to an even lower 80.8% in 2013: 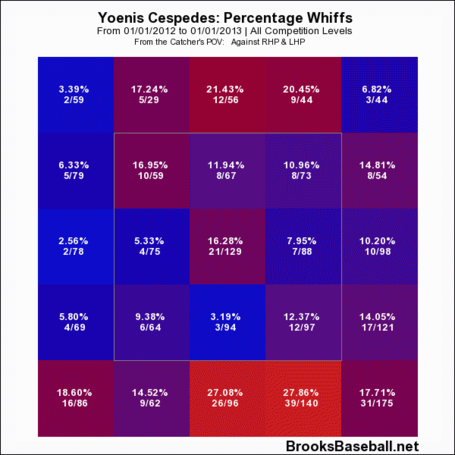 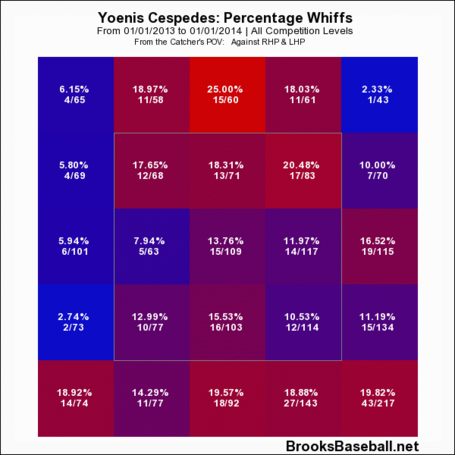 Cespedes is always going to have some contact issues, but after pairing his swing-and-miss tendencies with fewer line drives, it’s little wonder his BABIP dropped over 50 percentage points during his second season. The Oakland outfielder has tremendous physical abilities, so even with a high strikeout rate he can be still highly successful. But it is fair to wonder if the .292/.356/.505 line Cespedes posted in his rookie year will be the best season (at least offensively) of his career.

Like his Oakland counterpart, Middlebrooks’ plus power is limited by a frequent inability to make consistent contact. After a strong rookie debut, the third baseman came crashing down to earth in 2013, compiling a wRC+ of 83 in 374 plate appearances. The strikeout rate (26.2%) was alarming, and when coupled with his poor plate discipline, Middlebrooks really struggled to get on base, finishing with a .271 OBP. After a mid-season spell in the minors, the 25-year-old did show some encouraging signs over 158 plate appearances, batting .276/.329/.476 with a 7.0% walk rate and 24.1% strikeout percentage.

But even that type of performance leaves something to be desired. Unless Middlebrooks can demonstrate an improved approach at the plate over a full season, it’s fair to wonder if he will ever find enough consistency to allow his physical gifts to have an impact in the majors.

2013 was a strange season for Frazier, who drew more walks and cut down on his strikeouts, but saw his overall offensive performance decline. Most notable was the third baseman’s dip in power, as his ISO fell from a .225 mark during his rookie campaign to .175 in his second year, while his wRC+ dipped from 121 to 100. Both his line-drive and fly-ball percentages saw sizeable decreases, two factors that helped contribute to his diminished power and BABIP.

Why did Frazier struggle despite improved peripherals? As this article on Baseball Analytics pointed out (and as the zone charts below demonstrate), Frazier lost his ability to punish pitches on the inner half. 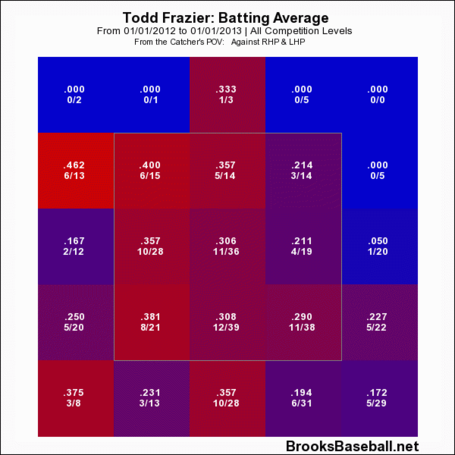 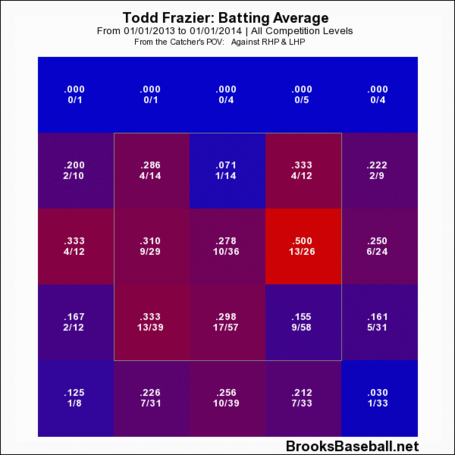 Can Frazier regain some of his ability to drive the ball? His track record in the minors, where he consistently hit for power and posted above-average BABIPs, indicates so, though he’ll have to recapture his line-drive stroke to do so.

Miley didn’t end up having a poor sophomore season, but the left-hander’s first half was bumpy enough to prevent him from amassing even half the amount of WAR he did during his rookie campaign despite throwing more innings in 2013. The Diamondback hurler will never strike tons of guys out, but Miley’s real problem was a spike in home runs and a 4.6% walk rate during his first year that was likely unsustainable. He generated fewer swings and misses both in and out of the zone in 2013, but also saw his ground ball rate increase.

If Miley can limit the home runs he allows (a tough task given his home ballpark), he has a chance to improve on his second-year numbers. The 27-year-old will never be an ace, but he has the ability to slot into the back-end of Arizona’s rotation and be a dependable starter for years to come.

So which of these four players has the best chance to rebound from their sophomore slump? And which one may never recover?

Of this group, Miley likely has the highest floor. In many ways, what you see is what you get from the Arizona lefty. Frazier, in my mind, has a solid chance to recover his rookie form, while Cespedes will always be limited by his propensity for strikeouts, though his speed and fielding ability make him a valuable contributor nonetheless.

Ultimately, Middlebrooks has the most to prove in this group, and unless he can demonstrate a more consistent approach over a larger sample, questions will always surround the third baseman’s future.

Alex Skillin is a regular contributor to Beyond the Box Score and also works as a Web Editor at SoxProspects.com. He writes, mostly about baseball and basketball, at a few other places across the Internet. You can follow him on Twitter at @AlexSkillin.